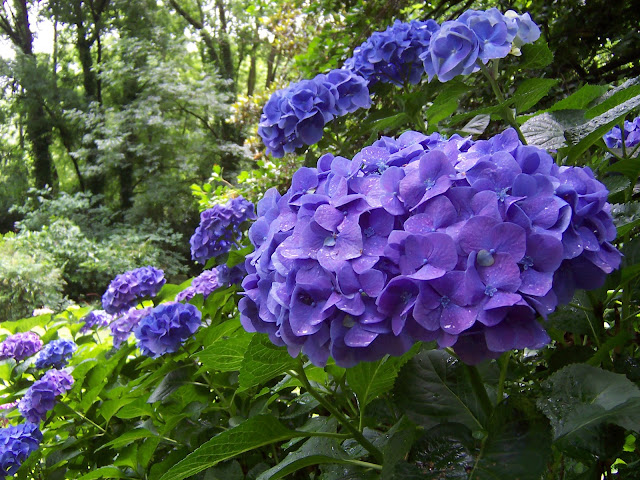 On a beautiful day in May 2006,  my two daughters and I drove our rental car from an underground garage in Paris to the coast of Normandy.  We were celebrating my younger daughter's graduation from college and my older daughter's completion of a master's degree in journalism.  Although it was a year late, I, too was celebrating.  However, mine was a milestone birthday (oh, how young I was!)

There were many highlights on the our trip from Paris, where we had stayed in an apartment in the Marais for a week.  We first went to a very crowded, but floriferous Giverny, then made our way to the D-Day beaches.  There, we got to see the end of a Memorial Day ceremony in the American cemetery.  We all shed tears.

Our ultimate destination was Varengeville-sur-Mer, where a visit with Robert and Corinne Mallet turned out to be the perfect ending for the trip.  I had had the pleasure of meeting the Mallets, arguably the two most knowledgeable people in the world on the subject of hydrangeas, when they came to Atlanta.  Penny McHenry, founder of the American Hydrangea Society, had arranged for several of us to visit nurseryman Eddie Aldridge in Birmingham so the Mallets could see oak leaf hydrangeas in their native habitat.  We also saw the Aldridge Gardens in Hoover, where Eddie had planted rows of Hydrangea quercifolia 'Snowflake', the double-flowering oak leaf Eddie's father had introduced to the world from where the plant was found in an obscure corner of Alabama.

Back to France:  My daughters were charmed by Robert, who took us on a wonderful tour of his family's ancestral manor house and the extensive gardens begun in the late 19th century by his grandfather.  I have photographs of my daughter in front of towering rhododendrons in full bloom.  Then, we drove to a two-hectare (just under five acres) field.  We got out of the car and walked around to see only some landscape cloth stretched out, with a few newly-planted hydrangeas (only identifiable by the emerging leaves) in an otherwise empty space.

Robert told us about the plan for a glorious garden, which would house a collection of hydrangeas from around the world.  He and Corinne would plant fast-growing paulownia trees to provide shade.  I couldn't picture this because for us in Georgia, this is rather an aggressive, not-too-attractive tree that can pop up in unwanted places.  Robert assured us that this was not the case in France, that the large leaves would quickly provide cover for those hydrangeas needing shade.

I have to admit that I could not picture any kind of garden in this blank field, although the surrounding countryside, with gentle, rolling hills was lovely in the fresh burst of spring.

Today, 11 years later, that lonely-looking field is a paradise of hydrangeas. Visitors coming from all over the world are awe-struck by the glowing colors and the magnificent blooms of every shape and size along the maze of trails meandering through the five acres.

Robert Mallet will be at the Atlanta History Center on Monday, October 23rd, to give a presentation on the Shamrock Collection, now the largest and most extensive assemblage of hydrangeas in the world.  The title of his lecture:  The Ultimate Exhibitionist:  Hydrangeas from Private to Public.   American Hydrangea Society meetings begin at 7 p.m., with refreshments and time for buying raffle tickets for a wonderful array of hydrangeas.  The lecture will begin at 7:30 p.m. in the Woodruff Auditorium located in McElreath Hall, 130 West Paces Ferry Road, N.W., Atlanta 30305.

The last time Robert addressed the American Hydrangea Society, I left with my heart beating wildly, wanting every hydrangea I saw in this notable collection.  His charm and enthusiasm are infectious, making him the perfect spokesperson for this genus of plants that has brought beauty and joy to so many gardens around the world.

Robert in the "before" Shamrock Collection in 2006 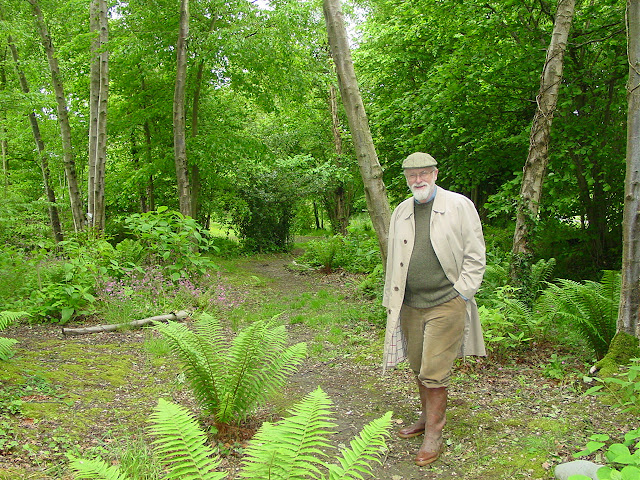 The beginnings of a world-famous garden 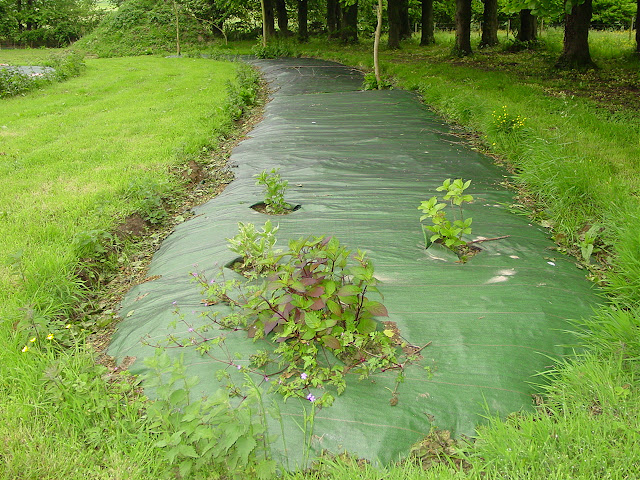 The Shamrock Collection "after" 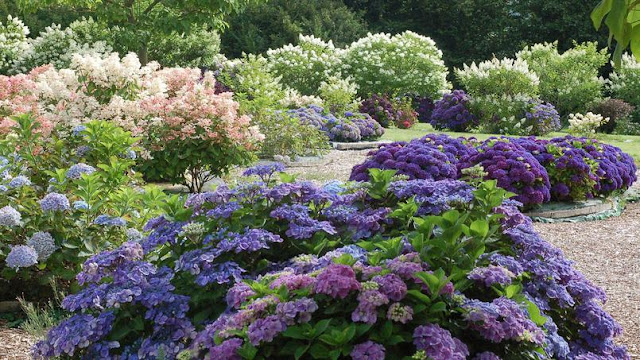 Entrance to Robert's family's manor house, La Maison du Bois des Moutiers, designed by Edwin Lutyens.  Those are hydrangeas in the terra cotta pots.  You can see Clematis montana 'Alba' in bloom in the enfilade. 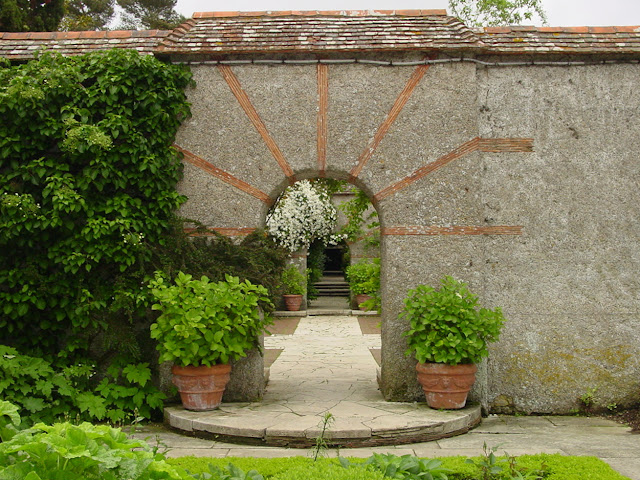 Part of the garden around the manor house 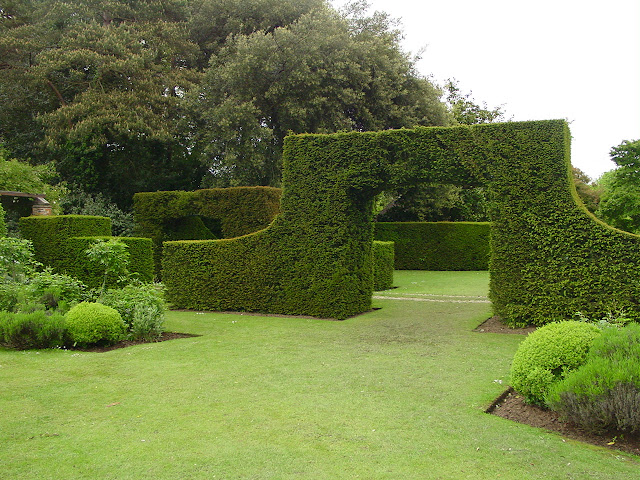 A Lutyens bench, of course.  Windows of the manor house festooned in clematis. 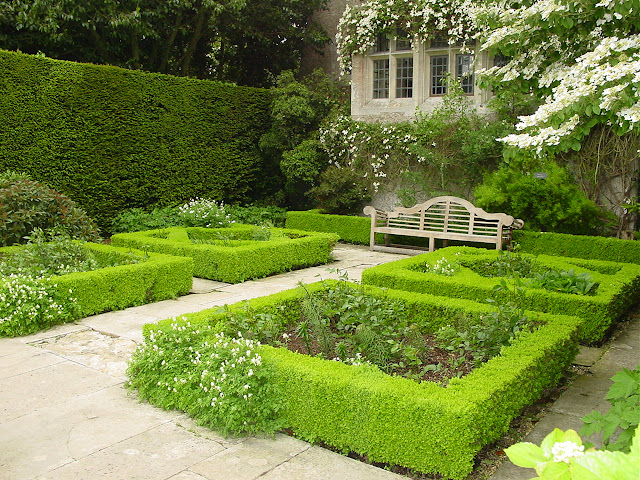 Note:  The photograph at the top of the page shows giant-flowered hydrangeas at Amy Linton's house in Peachtree Hills in Atlanta.   On Sunday, October 22, 2017, yet another award-winning documentary film edited by Amy - Robert Shaw - Man of Many Voices - will make its Atlanta debut at the Rich Auditorium at the Woodruff Arts Center., 1280 Peachtree St., N.E., Atlanta 30309.   The time is 4:00 p.m., and tickets are $10 general admission.  The fascinating story of a great man, plus beautiful music.  I have to brag that Amy edited A Gardener's Diary on HGTV, produced by Kathryn MacDougald and me, and starring Erica Glasener.  Now, Amy is even more big time, with many acclaimed documentaries to her credit.   http://robertshawthefilm.com for information and to purchase tickets.


Posted by Martha Smith Tate at 3:00 PM No comments: