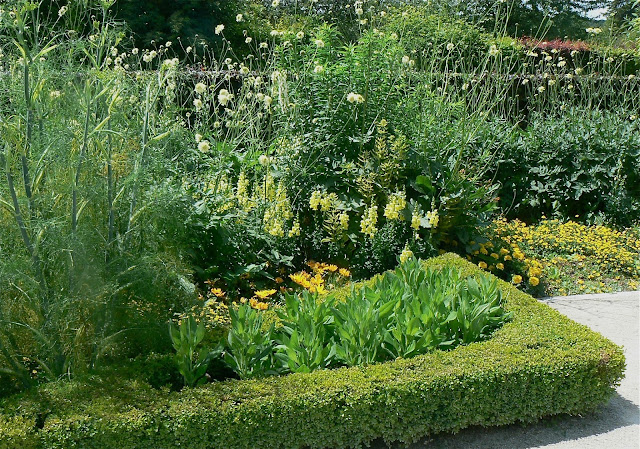 I have a longtime, cherished friend who often has me come and give her advice about what to do with her yard.  Not once has she taken any of my suggestions.  It's actually pretty funny, and it doesn't hurt my feelings at all.  I do have to say that I kept suggesting a pair of boxwoods to flank her front door, and she kept saying she didn't like boxwoods.  She later hired a garden designer (I am not one, by the way) who got her to plant two boxwoods by the front door.  They look great.

The last time I was over, she was concerned about a blank area on the white brick wall on the back wing of her house.  In an instant, I could see it.  An espalier on the wall, then a four-foot-wide space for some perennials for cutting, mixed with low-growing, flowering shrubs.  All this to be outlined with a hedge of dwarf boxwood, sheared as the one is above, to form a border and give a neat, controlled look.

"Oh," I said, and sort of chuckled to myself.  Here was yet another of my suggestions dismissed forthwith.  I was sure the design I had in mind would answer all her concerns, but it wouldn't work without the low hedge.

Take, for example, the scene pictured above.  There's a lot going on behind that low box hedge.  Without something to keep the chaos all in, I don't think the yellow flower garden would be as attractive.

But, then, I am obsessed with hedges of all heights.  I love them.  For over a year, I have been looking at the only space that receives sun in front of my house (besides the parking area, which is blazing hot in summer).  I have designed in my head a beautiful little sun garden that requires a low hedge like the one above.  I even have access to one I could dig and move here.

But there is a major problem.  Sitting right where I want this garden is a berm with three giant trees - a tulip poplar, a sweet gum, and a second tulip poplar.  When we built this house, we carved a space out of the woods, and every tree that could be saved was left standing.

When I had a garden designer come in the beginning, she suggested taking out those three trees and flattening the berm (oh, how I wish I had).  My husband would not hear of it.  He was determined to save every tree.  In fact, he insisted on lopping off a planned carport to save a white oak which hovered over the new house.  Years after my husband died, a 40-foot-long limb fell from that tree.  The oak is now gone, and in its place my arch garden.  There is still no shelter for cars.

I am off subject here, but I need to explain further.   I did apply for a permit to remove the three trees, not because of my vision of a flat, sunny garden, but because the biggest and closest poplar is listing toward the front of my house. Furthermore, the roots of all three trees are exposed, and that worries me.  My son-in-law more than once has expressed his reluctance to let his two-year-old daughter and her younger sister sleep in a second floor room that is right in the path of the largest tree.

The City of Atlanta did send someone out.  I saw him drive up, turn around, sit for about two seconds and then drive off.  He never got out of the car and was gone before I could get to him to explain that the top had already broken out of the tree and that several limbs had dropped.  The permit was denied.

It's silly, but not a day goes by that I don't look at that berm and see a flat, sunny garden filled with sun-loving flowers.  You would enter under a rose-covered arch which would free my 'Climbing Iceberg' that has been imprisoned in a container for three or more years.  I also have four more roses that would flourish in this spot.  They are pillar roses and would need tuteurs. but that would add some height to the space.  Right now, the roses are languishing in too much shade.  The best part is I could put up a fish-line barrier that would keep the deer out.  And, of course, I would have that lovely little hedge.

Tomorrow, I have a tree man coming to give me an estimate on a dead hickory in back.  I am going to ask him what the chances are I could get a permit for those three trees.  I would love to get this project started and finally have a sunny, although small,  garden.

September would be the ideal time to move that existing hedge (wonder what my friend will think when she sees it).  I don't want to lose the chance of getting it.  So, I'll cross my fingers that something will work out, but I may just have to wait for the next big limb to fall.


Here's is what I had in mind for my new hedged-in garden: 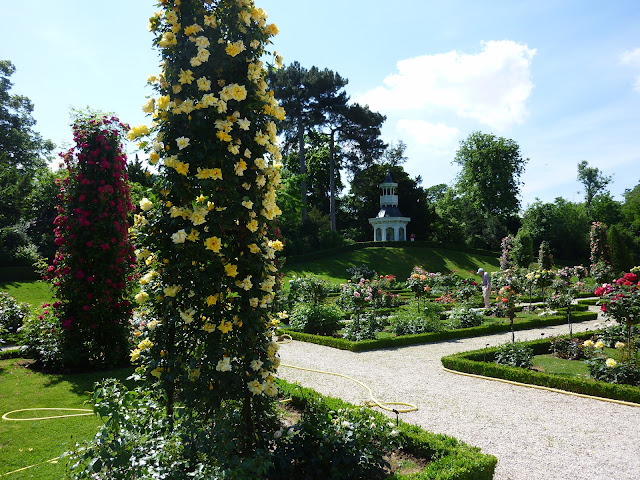 Just kidding!  This is Le Jardin de Bagatelle in the Bois de Boulogne in Paris.  The photo was taken by my friend Carol Tessier, who has her own spectacular jardin on the outskirts of Paris.  Note the yellow hoses - wondering about a sprinkler system.  Those look very heavy.