Where did all the passion (for gardening) go? 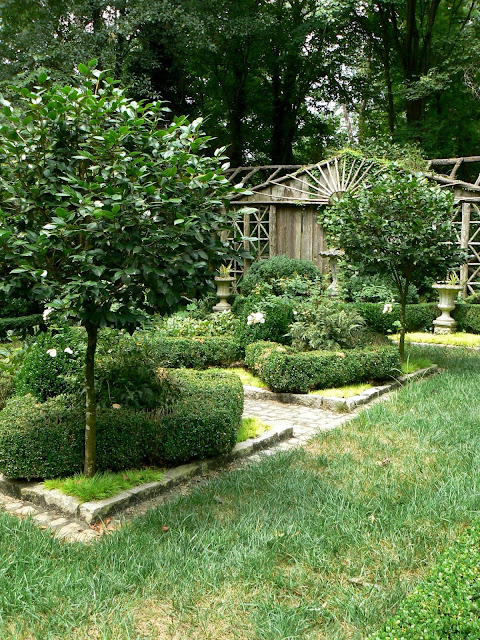 I'm preaching to the choir here, I feel sure.  But, I have seen a disturbing trend recently.  There's been a slowdown in the interest in ornamental gardening.  I mean the kind that consumes you, where you go to a nursery and want every plant and come home with half of them.  You have nowhere to plant anything, no plan in place, but you had to have the shrub or perennial - likely one you've always wanted, and here it is.

Do a lot of people do this anymore?  In November, I went out to longtime grower Bobby Saul's wholesale nursery.  Down at the end, some veteran garden designers had put in an extensive garden.  In one section, there were ground covers, punctuated by unusual grasses and some agave-type plants.  There were also ornamental peppers mixed in and lots of herbs.  I had actually come to check out some zinnias my friend told me about, but they had been nipped by a cold spell.  They were supposed to be spectacular.  I hope to catch them next year.

As I walked around with Bobby, he talked about how his business had changed.  I can remember going there, say 15 years ago, and my heart would race, wishing I could buy every shrub and every perennial on the huge lot.  Trucks were coming and going like mad.  Business was booming.

"The millennials aren't into gardening," he said.  "They're not buying a lot of ornamentals. We've seen an uptick in interest in growing vegetables, but it's not like it used to be."

I was dismayed.  I have a daughter who is a couple of years older than the oldest millennial, and the farthest thing from her mind is a proper garden.  She does want an arbor to cover a concrete patio and a vine to provide shade from the western sun.  She and her husband have just moved into a newly constructed house.  I've only been once in the semi-dark, so I haven't had a chance to study the contractor's landscape.

What I did see scared me - terraced walls made of landscape timbers leading steeply up to a house in back of them.  They also have an undulating wooden fence surrounding a tiny back yard that has been recently sodded.  I immediately started rattling off things I would do, plants I would use to block the neighbors, but I think my words failed to register with them.

To be fair, they were still unpacking boxes, and I was already redesigning their front entrance in my head.  They both work long hours each day, so there hasn't been much time to do anything.

By contrast, my other son-in-law, who is 41, has only a balcony at their apartment in a Brooklyn, New York, brownstone, but he is obsessed with gardening.  He and my daughter have bought a house in Montclair, New Jersey, but are renting it for two years due to their nanny situation.

My son-in-law has made a beautiful "landscape" in a space that must be only 12 ft. x 16 ft.  He has climbing roses, a boxwood hedge, hydrangeas (the blue macrophylla he bought as a 'Limelight' has spent a lot of time indoors recently) and lots of herbs and annuals.  He was all set to buy an expensive espalier of apple trees, when my daughter stepped in and blocked that idea.   He's already dreaming and studying the large corner lot in Montclair and drawing out possible scenarios.  This is encouraging.

I say all this because ornamental gardening has been such an obsession with me.  Due to my circumstances, I haven't been able to fulfill a lot of my own dreams, but one thing is for sure.  In whatever time I have remaining, gardening, I know, will always be a thrill to me.  As my late guru Margaret Moseley said, "Gardening is so exciting - watching over plants and waiting for them to bloom...There isn't anything like it.  I can't wait to get out there every morning to see what's going on in the garden.  There's never a dull moment."


Photo above:  Part of a beautiful garden belonging to friends who spent decades changing and improving and experimenting with their back yard.  They were often on the big tours sponsored by the Atlanta Botanical Garden.  I ran into them and was surprised to learn that they had turned everything over to a maintenance company.  But, I know this wonderful landscape gave them years and years of pleasure.