An owl inspires a garden design 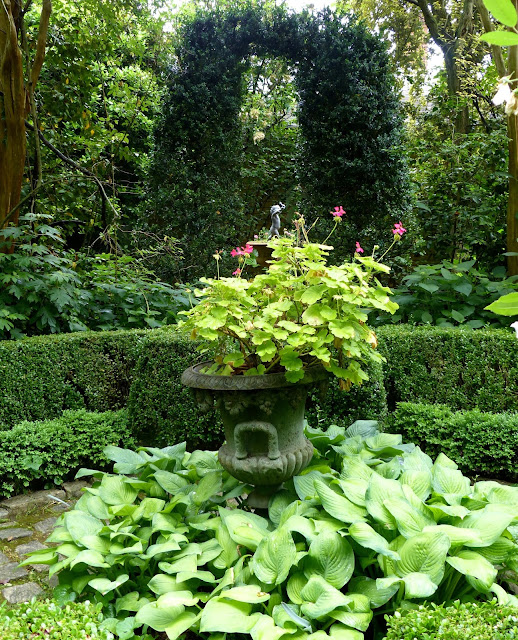 For more years than I would like to admit, I've had 20 fastigiate boxwoods sitting in their original 3-gallon containers, awaiting placement in my landscape.  These plants are treasures - I had wanted them for years, and I was finally able to buy them at a fall sale at a specialty nursery.  My dream come true.

But what have I done with them besides hauling a few around here and there to see how they'd look in various places? Nothing.  I've had lots of ideas, but one by one, each has been rejected, mostly because a plan only incorporated a few of the plants.  What to do with the rest?

Late yesterday, after a day-long feeling of fatigue, I trudged up the hill to the vacant lot and pulled a few strands of English ivy off ancient trees.  I did this to give my dog some exercise, or at least a feeling of being outdoors for a while.  He had been cooped up inside with me on a beautiful, perfect-for-gardening-or-tennis day,

We came back down, and I could hear two barred owls communicating just behind my house.  I already had my camera (I always take it up on the hill, hoping to snap photographs of the elusive red-headed woodpeckers who live up there), so I thought I might at least be able to catch the outline of one of the owls in the fading light.

So, I sat down on a mossy knoll in the woods and waited for one of them to announce its location.  Not another sound.  I was outsmarted.  They were still there, because I would have seen at least one of them fly - hard to miss, because their wing span is so wide.

As I waited, a thought came to me.  I had just looked with consternation at three camellias I planted several years ago.  I bought them at a big discount center that's only open part of the year.  They had some French name like Comte de (Quelque Chose), so I thought they'd be perfect for my French-inspired house.  Beside them, right in line, was a fourth camellia (from a different, very respected nursery) that I thought would turn out to be a favorite.  I bought it for its impossibly deep, almost black flowers.   The catch is catching the flowers open.  I see them in bud, then partially open, but then they fall off the bush.  I have yet to see what a full-blown bloom looks like, although the partial flower reveals a waxy texture, not something I'm wild about.

The blooms on the pseudo-French ones are red, which I like, but are disappointingly small.  Adjoining this planting is a line of English boxwoods, forming a sort of low, irregular hedge that parallels the side of the house.  All of this was done piecemeal and is too chaotic.

Suddenly, as I waited to hear the guttural trills (an oxymoron?) of the owls, it came to me.  All those boxwoods and camellias must be moved.  Somehow, some way, I need to train the slender boxwoods on arched frames in a long row, extending from the back corner of the house all the way out to the tree where I have a Banksiae rose planted at the corner of the parking area.

I got up and walked off the length of the space.  It would take 18 boxwoods.  That would leave me two to put at the bottom of the steps that go down beside the music room (meaning I have a piano in there) terrace.

I will need nine rebar arches that will have to be set in concrete and which will have to be identical.  This is where I run into trouble.  Should they be single, or should there be two arches connected with six-inch bars to make them sturdier?  That's a lot of welding and much more money, and is it necessary?  The arches cannot vary an inch because if they are to form a row, they have to be perfectly in line - all the same width and height for my sensational green enfilade.

And the final question is:  Do I plant the boxwoods in the existing pea gravel, which is held by a low cobblestone retaining wall?  That way, they'd be the right height, but it would make the path on the side of the house much narrower.

Well, I'll measure and work this out.  I've been around and around my house trying to find where to use these plants.  I knew I wanted to train them on some sort of fixed guide to get them to grow together at the top, but if it were a here and there thing, it would look like Disneyworld instead of a garden.

It's only a germ of an idea.  Now to figure out the logistics.  I must get these rarities in the ground.  I have to talk to a welder, but where is he, she?

Note:  Above are two fastigiate boxwoods in the late Ryan Gainey's garden.  If memory serves me right (I probably have slides to show the "before", but it would take a lot of time to locate the one I want), Ryan had these two upright boxwoods planted side by side to flank a walk and then joined them at the top.  I don't know if he used some sort of guide to get them to grow together, or if he just pruned the tops to link to each other.  I need mine to be very uniform at the top, since I have so many.  I've got to have those rebar forms.  I would have something similar to this, but with more slender boxwoods and not as thick.  If you Google Heronswood arches (images), you will see a taller and fancier version of what I am contemplating.  To my recollection, they were hornbeams, trained on some sort of forms.  Dan Hinkley designed these when he owned the nursery, and I saw them in a much less mature stage.  Somewhere I have slide I took, but where?
Posted by Martha Smith Tate at 10:27 AM No comments: