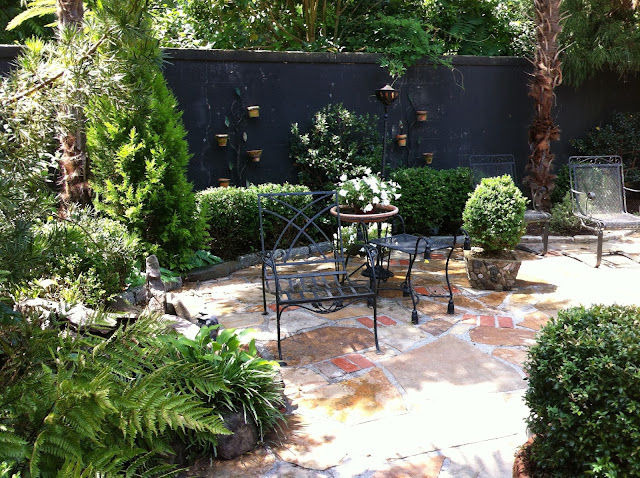 We planned to have parties - many of them - in his new garden.  We talked about it a lot.

Years ago, when I first walked into my friend's back yard, I sort of winced.  It was dominated by a giant oak tree.  It was a dark space and wasn't very inviting.  Oaks are wonderful, majestic shade trees, but they are messy and not the best canopy for a garden.  You have the catkins in the spring and leaves and acorns in the fall.

As fate would have it, the tree fell on his house one night.  He wasn't hurt, but the tree did a huge amount of damage, and the back of the house had to be rebuilt.   All of a sudden, he had a sunny back yard.  He was marking time until he could afford to do a major overhaul of the space.  That first year, we planted zinnias in the space where the root ball had come out, but it was pretty much a hodgepodge of broken stones and some stubborn weeds and overgrown tropical-looking plants.

Another year passed, and he asked me to help him design a garden.  I demurred, saying I lacked experience, but he persisted, and finally I came up with a plan, chose the plants and had them delivered and installed.  He took care of the stonework.

The whole garden was surrounded by a six-foot tall stucco wall.  Against this, we planted two espaliered Camellia sasanqua 'Yuletide.'  There were two mature Cryptomeria japonica which cast shade in one corner where an existing yew (rare in the South) was healthy and happy and took up a good bit of space.

We made outlines of boxwood hedges around 'Annabelle' hydrangeas and several camellias we bought at a garden outlet store.  This same hedge turned a corner to line the entrance to an antique tool shed.  Some struggling cone-shaped boxwoods were moved over behind the hedges on either side of the shed.  We also added some tea olives, and along the sunny part of the wall behind the shed, we lined up arborvitae trees left over from my daughter's wedding.  He found two variegated conical euonymus plants that were about five feet tall.  These added some light to the shadier area and shone beautifully on the sunny side.

On the opposite end across from the shed, near the exquisite iron gate that marked the entrance from the driveway, was a tiny pond which had a pump that circulated water over some rocks into the pool.  He planted lemon-colored cedars in a narrow border and moved some hostas over against the wall where he also had some existing cast-iron plants and autumn and holly ferns.  In several places, he had overgrown Fatsia japonica, which we cut back to a better size.

In the middle of the garden where the tree had been, he put a stone table and had hanging lights installed on an iron pole, perfect for the small dinners we would have.  Since he was an interior designer, he was able to have custom cushions made for all the benches and chairs.  It was all set for entertaining.

But in the spring of 2016, he began to have shortness of breath.  It ended up that the congestive heart failure that had manifested itself four years before, but had been in control,  had returned.  He fought hard, and was in and out of the hospital for weeks on end.  Finally, his doctor told him the only way to survive was to have a heart transplant.

The photograph above and directly below are two of several I took while he was in the CCU waiting for a heart.  I brought my computer over to show him.  We vowed that in the fall, when he would have recovered from the surgery, we would have our first party in the garden.  Our plan was to have it when the tea olives would be blooming, and sweet fragrance would waft over the romantic scene with the lights and some soft music and candles.

I won't go into the agony of the roller coaster ride of hope and despair that ensued, but a week after we celebrated his getting on the top of the transplant list,  he contracted sepsis and died a week later on this day - June 16, 2016, at age 65.

It turned out there was a party in his garden, after all.  His dear friends Robert and Edwin, who never left his side during his ordeal,  planned a wonderful celebration so his designer friends could see the new garden and say good-bye to his fabulously decorated house (full of wonderful art and furniture; it had been featured in many publications and on home tours).  The party was held on the Sunday after his August 12th birthday.  There was plenty of laughter and sharing of memories.  He would have loved this wonderful occasion and all the attention, but this was not the party we had so often envisioned.

I actually tried to write this yesterday on the one-year anniversary of his death, but could not finish.  I started thinking about all our plans - we talked on the phone every day for years.  He was so proud of the garden and was having fun buying plants - mostly boxwoods in various shapes - to put in containers.  That first year the garden was finished, he had red tree roses underplanted with yellow creeping jenny and red begonias sitting atop the wall.  He was loving decorating the garden.

The garden now belongs to someone else - a young couple who bought the house.  I can't help but wonder if they have clipped the box hedges like he wanted, or if they've added furniture (all of his, including the clay pots of boxwoods, was sold at an estate sale).  I wonder, too, if the couple has planned parties, as the space, even without the table or any of the planters or furniture, was still beautiful and just right for entertaining.

I had written down for the  couple the names of the two large bushes on the side of the house.  The plants had probably been there for decades (the house was built in 1924).  One was an old-fashioned Deutzia scabra and the other a mock orange (Philadelphus sp.).  We had used branches of both in church arrangements.  I had asked the couple not to cut them down, so they, too, could enjoy the flowers in the spring.

Actually, my title above from the poem To the Virgins, to Make Much of Time by Robert Herrick is meant as a reminder for young women to hurry up and marry.  But that second line, "Old Time is still a-flying" makes me think of how we ignored such an idea. We thought we had all the time in the world.  I'm glad that he never realized that he didn't.  I'm also glad he had something to look forward to, that kept his spirits up and his hope alive until he lost consciousness.  There's nothing like a garden to do that for us.

The tool shed and the table with the lights; we did several hedges of Korean boxwood around the garden: 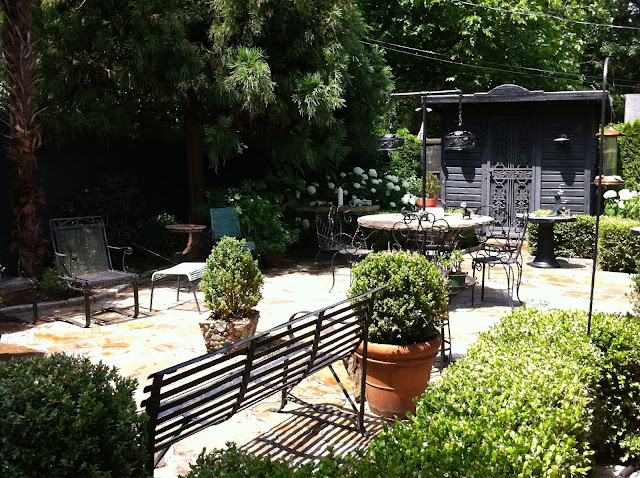 Old-fashioned Deutzia scabra on the side of the house: 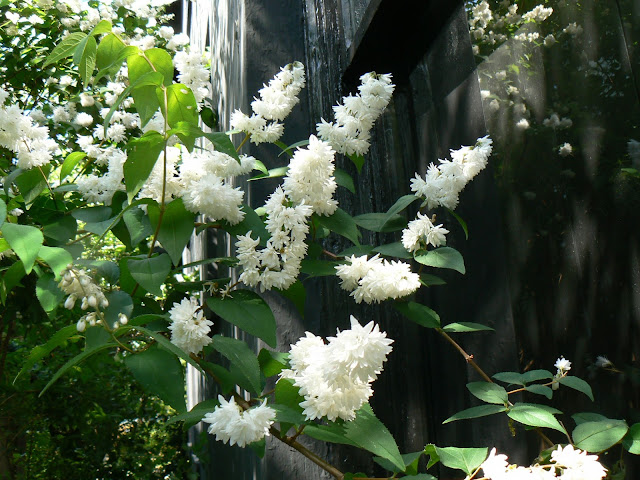 An Easter arrangement he did for church, using branches of his mock orange.  That's it hanging down on the right front: 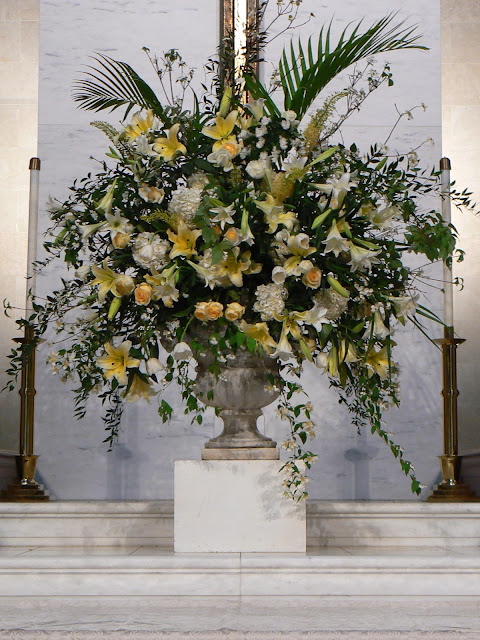