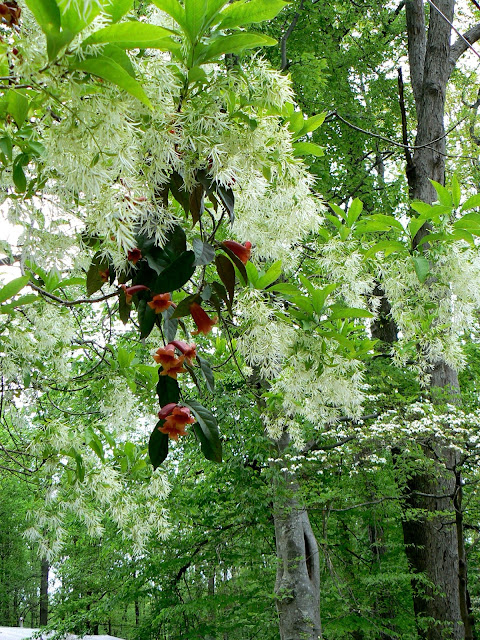 When we were producing A Gardener's Diary on HGTV, we had fun latching onto phrases that kept cropping up and appropriating them to other situations.

For example, in the pilot for the series, host Erica Glasener asked gardener Ruth Mitchell how she had decided on a combination of a bright pink spreading verbena and a prolific low-growing rose (was the rose red?  I don't remember!).

Ruth answered with typical enthusiasm.  "Oh no. I didn't do it on purpose.  It was just a happy accident!"

After that, the producers and editors had fun calling just about any circumstance that cropped up a "happy accident." There was sort of a competition as to who could come up with the silliest use of the phrase.

Later, when I was visiting an Atlanta garden, the owners wanted to ask if I could identify the orange vine that had slipped down into the flowers of their grancy graybeard.  I told them it was crossvine, Bignonia capreolata 'Tangerine Beauty.'  The gentleman said he had not remembered planting it, but he loved the combination that had somehow come about.

"A happy accident," I said, and he agreed, not knowing how many times I had said those words in the past.

I have a happy accident about to take place in my little arch garden alongside the house.  There is a Japanese holly (the kind that resembles boxwood, but is not as elegant) that has grown up next to a parent plant.  For some reason, it has not branched out and has remained fastigiate.  I do keep it clipped some so it will remain narrow, and it is now about 10 feet tall.

Several feet away I have 'Graham Stuart Thomas' rose, growing on the same line as the holly, both  just begging for an arch.  Yesterday, I bought a large wire one, which I hope will prove sturdy enough to let me train this narrow evergreen up and over it.  From the other side will come the yellow rose.  I'm hoping for complete coverage from both sides to smother the arch.

While I'm now officially planning this combination, it was truly a happy accident that the holly anomaly came up where it did.  I know I'm going to have to jerry-rig some support for the sides of the arch to stabilize it (the holly is strong and stiff and sort of crooked), but I think it's going to be a lovely combination, if I can get it to work.  I think I"ll know soon.

Below:  Some errant roses that fell from the tuteur.  Soon they'll all be attached to a new garden arch. 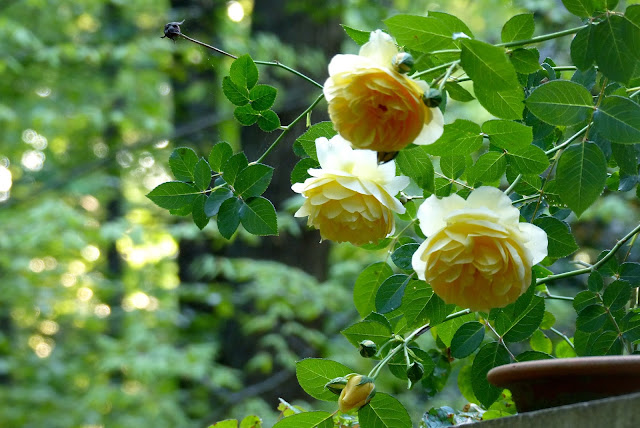 Posted by Martha Smith Tate at 2:01 PM No comments: