Stopping by a shady garden 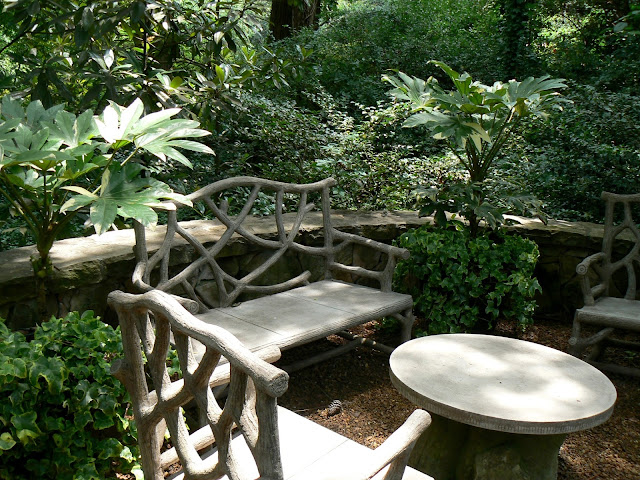 If you've read my blog, you know that I long for a large sunny, flat space to make a garden.  For 43 years, I've had anything but.   I live in a forest with steep hills.

There are compensations.  Just this morning, I did a double take when what I thought was a large orange cat trotting down my driveway turned out to be a red fox.  I haven't seen one since 2011.  While he was going too fast for me to grab a camera, I am going to record his appearance in my bird book so I'll remember.  I was afraid the foxes were gone forever - I used to hear them scream in the wee hours of the morning.  Then, for years, silence.  So, I was so happy to see this little creature zipping along.  My tenant saw him last week, so maybe he's back to stay.

I do like to walk around my house looking for potential garden spots.  I'll think I've found a sunny spot, but then the seasons change, and I'll realize there is not enough light for what I would like to do.  So, I'm back looking at places for yet another shade garden.  While wading through some old photographs, I came across this grouping in an Atlanta garden.  This is something I could do if I can find the right spot with the proper overlook.

A word about these woods, and one good thing I can say about the deer, who first came here around 1999.  They have cleaned all the underbrush from the forest floor.  I had pretty much eliminated poison ivy from my four acres, but a part of my neighbor's property which I can see from my kitchen window had plenty.  Deer eat poison ivy?  Who knew?  Now, there's not so much as a piece anywhere.

One time I was on a train going into Brussels.  Out the window was this exquisitely beautiful forest with very tall trees and absolutely nothing on the forest floor.  It was so magical.  Ever since, I've thought a clean forest would look great here.  The deer have helped me out, but I do have a good many fallen trees that sort of mar the idea.  Still, it's not out of the realm of possibility to get someone with a chain saw to help me out.

So, I now have a mission.  To find just the spot for a grouping like the one above.  Not that I would ever take the time to sit on a concrete bench, but I'd love to look at a scene like this.  Sometimes you just have to "settle", rather than get exactly what you want.  If I could have a serene garden area like this, I think I would be ecstatic - at least until I started thinking about rose-covered arches and a giant cutting garden where I would grow all those sun-loving flowers I've dreamed about for so long.  Until that day comes, though, I can work on being a good steward of the riches I've been given and be grateful that I have a place to get out and garden.
Posted by Martha Smith Tate at 5:00 PM 1 comment: