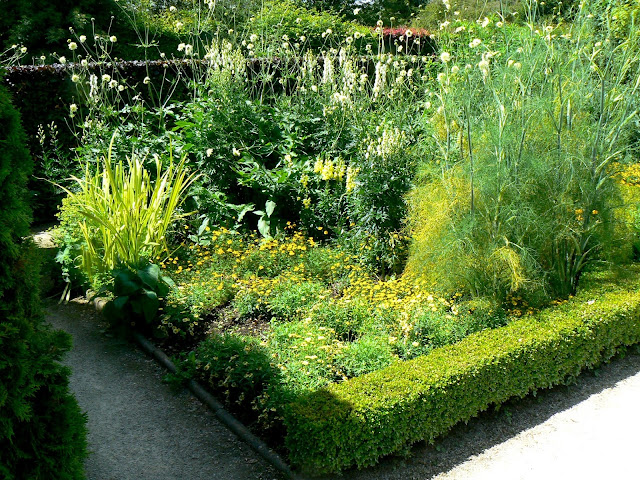 I'd almost forgotten what I had planted years ago outside my kitchen window.  Because of the way the light fell on the rectangular space outlined in boxwoods, I figured out that yellow and chartreuse would look best, that is, if I chose to do a monochromatic garden.

So, I started out with a yellow-leaved forsythia and Hosta 'Sum and Substance.'   Then, I planted a yellow woodbine honeysuckle to climb up the walls, and lemon-yellow day lilies in a row against the house.  I started thinking of every yellow flower I could use, and the list seemed endless.

It was going quite well until my husband suddenly went into garden project mode without consulting me.  He hauled in some dark red bricks to cover the ground.  I didn't say anything, as he was enjoying what he was doing.

The piece de resistance of his design was a cement basin with an elf sitting atop.  It came from his mother's (where its placement was very attractive), but when I saw it right in the middle of the space, I shuddered.  It was not raised basin, but sat on the ground.  It mainly collected leaves; it was too deep for birds to splash about.

I realized then that the dark red brick would not work with my yellow theme, and I could barely look at that elf, so I moved everything up to the little house, all except for the honeysuckle, which eventually disappeared.

Since 2013, when a giant white oak that shaded a lot of this little garden had to be taken down, I finally came up with a new gravel arch garden in this very space.  The bricks were all removed along with the cement elf sitting atop its shell.  I have resurrected my plans for a yellow garden.

At the very end of the rectangle behind a bench, I have Rosa 'Graham Stuart Thomas' planted.  Despite my neglect and this hot summer, it has continued to turn out lovely, dusky-yellow flowers.  It is tall and gangly and splaying everywhere, awaiting an arch which I think I'm going to have to have custom-made.  I have trained a seedling Japanese holly to form an eight-foot tall line (so far).  I envision this attached to the arbor so it will be evergreen in winter, and then have the yellow rose covering it for a good part of the year.

I took the above photograph in the village of Giverny in France.  A long, paved garden, or rather a series of gardens, contained squares of flowers and foliage all of one color.  This is the yellow one.

I don't have that much space, but I'm still inspired by the sunlight hitting the acorus (or is it an iris with variegated leaves?).  The pale yellow, airy pincushion flowers won't do here, I don't think.  They like cooler, less humid weather.  I would love to put them under the arch, but I will think of something else.  I don't know what will go in the one planting strip I have, but it's going to be fun trying to figure it out.  Do I dare put day lilies and hope the deer won't reach them?  I like lemon-yellow flowers best, but I don't mind the funny yellow of the 'Graham Stuart Thomas.'

Before I plant anything, I have to improve the soil in back of the bench.  This is going to take some doing.  Today it's too hot and humid, but next week promises to be cooler.  Maybe that's when I'll get started.

Below:  the rectangular garden ends with a bench given to me by my late friend Benjie. That's where a new arch will go along with some yellow foliage and flowers.  I'll train the fastigiate holly and have it be the backdrop for the poor, neglected 'Graham Stuart Thomas,' which is now splaying all over the place, waiting for a support. 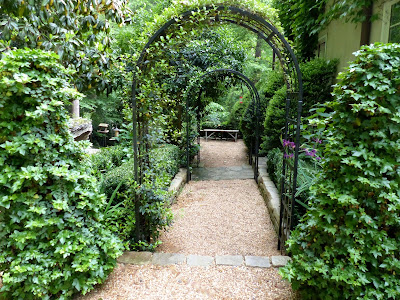 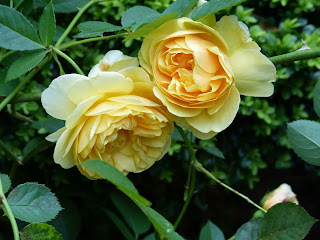