The summer of my discontent... 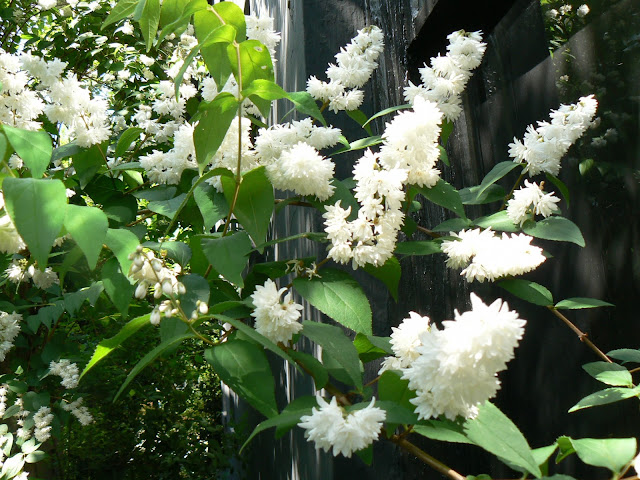 Back when this old-fashioned Deutzia scabra was in bloom in early May, I couldn't have foreseen what lay ahead that would leave me bereft during this long, drought-stricken, meltingly-hot summer. I haven't had the heart and really the time to come back to this blog which I love and have missed so much.

Starting in May, about the time the above shrub was blooming in his yard, my very close friend from church, Benjie Jones, began losing control of his congestive heart failure condition.  One day later in the month, he called me from the hospital to say I needed to come be with him because the doctor wanted to talk.  I sat there stunned as we were told the choices:  a heart transplant;  a medieval-looking, artificial pump to give him maybe a year (the dressing around the tube leading into his chest would have to be changed daily, and he would have to carry around battery packs wherever he went).  The third choice was hospice.

I quickly made the decision for him - we'll take the transplant.  I volunteered to serve as his caregiver. The interview to see if he would qualify was set for June 22nd.  Long story short, a roller coaster of hope and despair set in.  His heart got unexpectedly weaker.  By June 2, he was in the CCU intensive care at the main Emory Hospital.  It was a nail-biting week, but he passed all the tests to get on the transplant list.  He was officially accepted on June 6th, a Monday, with the status of "most critical."  On Wednesday, he felt great, got on a stationary bike and walked around the room with all his tubes trailing after him.

The next morning - Thursday - the doctor called me to say he was unconscious with a 105-degree fever.  He had contracted a staph infection in one of the two main ports in his neck and chest.  This proved too much for his barely beating heart.  By the next Thursday, he was gone.

I was heartbroken.  He had held out such hope and tried so hard.  The nurses loved him, calling him a "chick magnet" because he was so handsome (this is ironic, as he was gay; he never told them).  He was always so kind and uncomplaining and the best patient.

So, the rest of the summer I have spent watering his beautiful garden (why didn't I take more pictures before the 90 degree heat set in?), while his friends took on the massive task of selling his wonderful collections  -  he was a designer with great taste and a penchant for Baccarat, Cartier, Tiffany, plus an eclectic assortment of the most wonderful furniture and paintings. His house has been featured in numerous magazines.

Despite the relentless heat, the summer is waning now, and the house is empty.  Everything he had - down to some rusted hedge trimmers - was snapped up in an estate sale last weekend.  The 1924 bungalow, which he loved so, will go on the market next week.

I am still in shock.  I have spent just about every day recently watering the garden he and I designed.   I thought at this juncture, he would be returning home with a new heart.  He was to stay at my house for the month-long recovery.  We joked that we would be having the parties we always said we would have.  It would be a new start for both of us.

But it was not to be.  He was an only child, and his 93- and 94-year-old parents are still numb with disbelief and grief.  I think we all are.

Meanwhile, I've let my own garden, such as it is, go a bit wild.  Despite my best efforts, the deer got Mother's hydrangea just last week.  The center is okay, but the two plants I layered and which were growing great, are pretty much eaten up.

But I can always salvage plants.  Losing my friend, though, has cut me deeply.  Just this morning, I went into the empty rooms and out into the garden, now stripped of its benches, tables and even the  boxwoods in Italian terra cotta planters someone bought at a deep discount.

I walked around to the side where the wonderful deutzia you see in the above photograph grows up and over a tall fence. Next to it is an equally tall philadelphus.  Both were covered with white flowers this spring.  We used branches for arrangements for church just months ago.  I have tried without success to root both these plants.  I must get some more cuttings.

Already, someone is looking at the house today, even though it's not yet officially on the market.  Word has already gotten around the neighborhood, and I'm thinking it will sell quickly.  I hope I will get to talk to the new owners, to tell them that these two plants growing in a narrow strip next to the air conditioner on a forgotten side of the house have probably been there since the thirties.  They need to be preserved.

The newly-designed walled garden in back, installed after a giant oak uprooted and fell on the house several years ago, consists of boxwood hedges, camellias, variegated euonymus pyramids, tall arborvitae, 'Annabelle' and 'Limelight' hydrangeas, espaliered sasanquas, fatsia, two lime-colored cedars, fragrant tea olives and a tiny pond surrounded by cast iron plant, hostas and  autumn and holly ferns.  All are arranged around an expanse of paved orchard stone.  Benjie already had two mature cryptomerias and a large yew - dark green and healthy - despite living in this hot climate.  These trees and shrubs helped the garden to look mature, despite its young age.

I hope whoever buys his house will love all the wonderful features, including the heavy, rustic shutters and antique-looking tiled roof.  And, I especially hope they'll enjoy the garden.  Benjie had said earlier this year that this fall we'd have garden parties for sure.  We didn't get our new start, as we had envisioned, but maybe the people who move there will, in our stead, spend cool autumn evenings with the sweet fragrance of tea olive wafting over this very special space.