On this date - A safe bench among spring greens 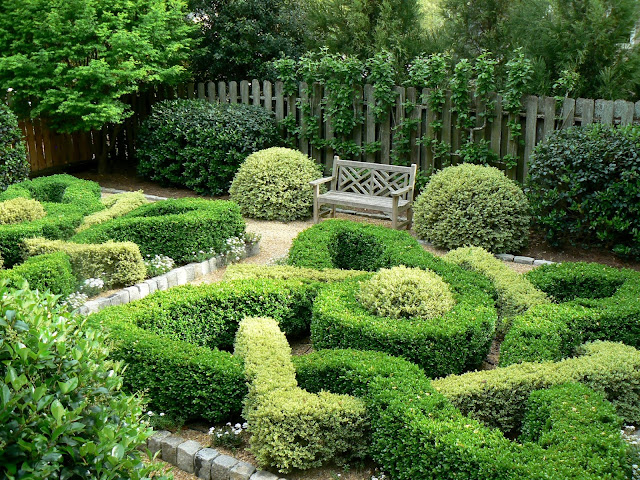 If this bench had been in its current place some 20 years ago, it would have been looking out over a kidney-shaped pool.

And the boxwood knot garden would have been under aquamarine water.  But lacking a lot of garden space, Mary Wayne Dixon, a leading supporter of the Atlanta Botanical Garden since its inception, made a drastic decision.  With her daughter grown, and no one to use the pool, she had it filled in.  In its place, she created a boxwood parterre, designed by her late friend, English writer, gardener, designer and lecturer, Rosemary Verey.

Back when Mrs. Verey was on the lecture circuit, she stayed with Mary Wayne during her visits to Atlanta.  It was the Englishwoman's influence that inspired the giant leap from pool to picturesque garden.

The nice thing was that the space was already lower than the house and the rest of the grounds - an ideal situation allowing one to look down upon the design.

I took this photograph on this very date four years ago.  Interestingly, we had an early-ish spring that year.  Just before you step down into this garden, there is a Viburnum macrocephalum in a shrub border.  In 2012, the flowers had already turned from green to white.  While spring came rushing down on us this year, the Chinese snowball is still in its green stage, or at least it is at my house.

I don't know if my friend ever sits on that bench, but I love its placement against the espaliered fruit trees.  The variegated boxwoods make it seem cozy.  And, what is very important to me, although I hardly ever find time to sit outside, is that you would feel comfortable putting your feet down on the gravel where you can see what's happening around you.  I'm making this latter statement because years ago on a garden tour, another erudite English gardener pointed to a lovely bench set among some tall grass and flowers.

"That is an ill-placed garden seat, " he said. "I would feel uneasy sitting there.  I like to know there's no creature lurking about unseen.  You should always make sure you feel perfectly safe when you're sitting in the garden."