Spring in the garden - bearing down upon us 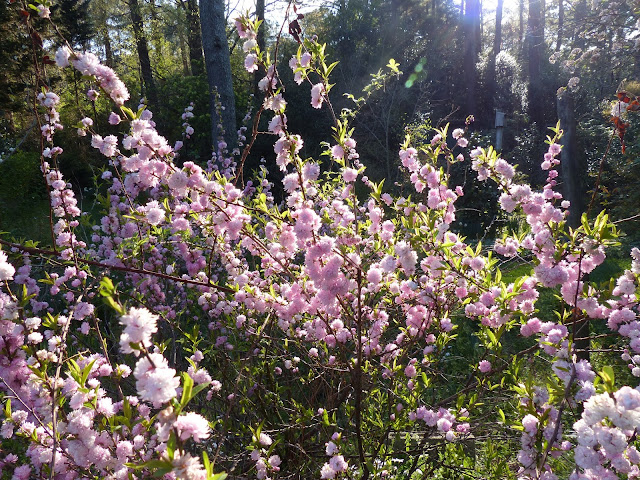 It has all come too fast.  We had a bout of hot weather a couple of weeks ago, and all of a sudden, spring started popping.  I was unprepared.

Actually, that's an enormous understatement.  I walk outside now, and I feel helpless.  So much to do, and everyday that passes, I become more panicked.

There's a reason for my frustration.  Last week, I had to have surgery on my lip for a skin cancer.  It had been scheduled for tomorrow, but there was a cancellation, and I took the appointment.

Now, because I have more stitches than anticipated, I can't bend from the waist or lower my head.  I can't do any strenuous activities, which I take would include moving four camellias from their too-sunny spot to a site a little further back in the woods.  I am not supposed to lift more than ten pounds, which I had not realized.  Too late, as I already took 20 pounds of hot bird seed out of the trunk of my car yesterday.

The worst is that I didn't get any deer protection put out up at the little house.  That's where a big clump of 'Sum and Substance' was about to pop out of the ground.  I put out some Milorganite at my house, but I didn't make it up there.  I can imagine the deer have already struck.  They had shredded the hosta by the end of the season last year.  I have some tablets to put in around it (I had planned to dig it and bring it up here and plant it in a container), but I need to water them in.  At present, I can't crawl up inside the basement to turn on the outside spigot;  buckets of water are too heavy to take from here.

I am, however, able to drive around (with a bandage looking like a giant white mustache), and there's so much beauty already.  The Yoshino cherries are at their peak; spireas are putting out snowy white blooms; dogwoods and azaleas are suddenly acting like it's April.  Our native Carolina jasmine is covered with cheery yellow flowers.  Banksaie roses are also showing some lemony-yellow blooms.  Other yellows are out, too -  Kerria japonica and bright yellow forsythia.  Everywhere I drove yesterday and today, I saw loropetalums literally smothered in hot pink. It's a real explosion of beauty.

But, there are plenty of leftovers from late winter.  Many camellia bushes are still blooming their hearts out.  And the hybrid hellebores, or Lenten roses, although now almost all green, still stand out in the garden.  Most of the daffodils are over, but I saw plenty of clumps of late bloomers.

On Saturday, I received an e-mail from someone at my church.  She sent along two photographs of a fluffy pink flowering shrub, asking if I could identify it for her neighbor.  It was about forty years ago that I had seen this shrub for the first time.  I was driving along a road in what was then rural Cobb County.  I almost had a wreck.  Out of the corner of my eye, I glimpsed these spikes of light pink tufted flowers coming out of the ground.  I had no clue what they were.

A few years after that sighting, I learned that this old-fashioned passalong plant was dwarf flowering almond (Prunus glandulosa).   An elderly gardener in Athens, Georgia, gave me one of hers, and I've loved seeing the buds burst open into fluffy pink balls each spring.

The plant you see above is from the late Margaret Moseley's garden.  Margaret also had the white version, as well.  I love the latter, but I still remember that moment so long ago when I saw those pink puffy flowers sticking up in the yard of a weathered clapboard house.  The flowering almond doesn't last very long, but it's worth the space in the garden.

Back to the spring which is barreling down upon us.  There are so many chores to do, it makes my head spin.  Weeds are coming up in the pea gravel.  I have some organic fertilizer for roses, but I can't do anything about that for another week.  I need to move those camellias, and I really ought to rescue some hydrangeas that are vulnerable to the marauders.  I'll just have to wait and in the meantime sit back and enjoy the show.  It's not the first spring I've gotten behind on everything, and it probably won't be the last.