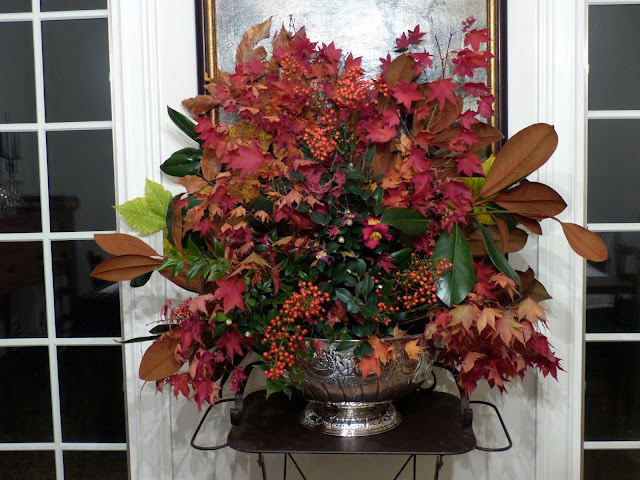 Today is the last day of November, and even though autumn is not officially over until December 21st, the fall will be a distant thought as of tomorrow.

But, I wish I could stretch out November.  I love all the foliage arrangements you can make.  Above is the one I had for Thanksgiving this year.  In my usual fashion, I was running around trying to clean the clutter from my main rooms, throwing things into closets and furiously sweeping up obvious debris from the floor.

On the morning of Thanksgiving eve, I called a wholesale florist to see if they had any red rose hips.  In the past, I've combined those with American beech leaves I've picked Thanksgiving morning (they don't last overnight, but shrivel and turn a tan color, so I have to gather at the last minute).  The wholesale guy I talked to said, yes, he would pull me some.

I drove like a maniac over there, only to discover there were no rose hips at all.  He had three packages of aronia berries waiting for me.  But they were a dark red, and I really didn't want to spend $45 on something I didn't want, so I rushed back here and ran up the hill to the vacant house.  You can see my haul here.

Despite my panic at running out of time, I greatly enjoyed gathering material for this arrangement, which was thrown together in record time Thanksgiving morning.  I did have a large oasis that was already soaked, so that made it easy.

Here's what I found:  Brown-backed magnolia (I'm thinking it's not 'Bracken's Brown Beauty', but can't be sure; the habit is more open on this tree),  Japanese maple that shriveled a bit overnight (I had all this in buckets outside), Camellia sasanqua 'Yuletide'; nandina berries that hovered between orange and red.  The yellow-green American beech leaves you see on the left came from my tree outside the back door.  Usually, it's already tan, but I was lucky it hadn't all turned yet, so I had good yellow, green and bronze color.  Those were gathered Thanksgiving morning.

My time of foraging on the vacant lot next door may soon come to an end.  If the new U.S. President lifts sanctions on Russian plutocrats, I imagine this property will either be occupied or sold.  The rumor has been that it was bought by a Russian billionaire whose assets in this country were frozen.

On Sunday, I went to the farm to gather winged sweet gum sticks, American red cedar and pine for Christmas arrangements at church.  I almost had a meltdown when I realized that my favorite cedar tree - the one with tiny brownish-orange berries - was dying on the bottom.  I was able to reach a few branches, but I first assumed that the drought had taken its toll.

But, as my friend Richard with the jeep and I soon realized, most everything was dead or dying around the edges of the fields.  We concluded they had been sprayed - unthinkable!  I can't really write much more about this, as I want to keep my blood pressure down.  The hay man had taken it upon himself to kill everything in sight, including all the pines, cedars and a beautiful stand of berry-laden native yaupon holly next to one of the fields.  Even the young sweet gums, which are a nuisance until I need the winged sticks, were dying and brittle.

When I called Mr. Hay Man the next day, he thought I should be grateful because he killed some privet, too.  He scolded me and said I needed to let him know next time what I didn't want sprayed  - as if I had been forewarned of this travesty.  I was sick over it and can hardly think about it now, but all that lovely foliage the jeep guy and I gather every year - one of my favorite traditions of Christmas - is now brown and unsightly.

But, I was able to salvage some evergreens - just not as many.  I think I made it clear to Mr. Hay Man that he needn't warn me, because there won't be a next time.  Who would ever have guessed anyone would do such a thing on someone else's property without their permission?

But, back to November and this last day of the month.  I hate to think that I might not be able to duplicate this arrangement next year.  It's bad enough that I am trespassing now (I had called the realtor two years ago to ask for permission, but she never got back in touch with me;  I justify my actions because I've kept ivy off the magnificent old trees up there).  In my own yard, I do have a 'Little Gem' magnolia and nandinas,  but I need to replant a 'Yuletide' and find someone willing to spare Japanese maple foliage.  Or maybe I can find something at the farm that the Hay Man hasn't killed.  I've used lots of autumn branches from there in the past.  I guess we'll see next year what happens.

Below, American beech leaves on the dining room table.  That goose decoy will be changed out for the darker, more elegant ones I use on the tables at Christmas. 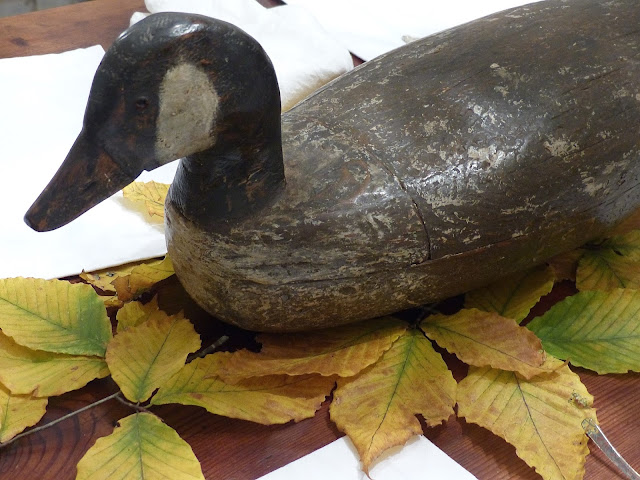