Great texture (and other things) in a Raleigh garden 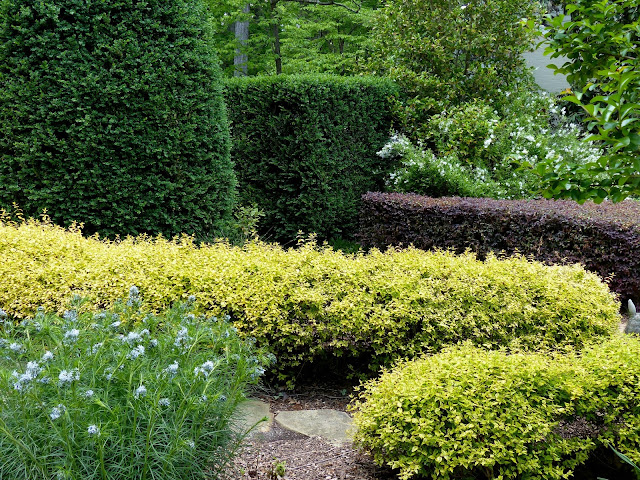 I think if I had a garden that looked like this one, I would shout it from the rooftops.  When my daughter was engaged to be married, her future father-in-law Ned Yellig and his wife Sylvia White came to Atlanta for a visit and stayed with me.

We had a wonderful time and hit it off immediately.  The visit was maybe for two nights only, but we talked about a lot of things.  But not once did either of them mention Ned's garden.  When I went to Raleigh this past April, I about fell over when we got out of the car, and I saw the main garden in back of the house.

Ned, who is a retired physician, wasn't there, but his son Christopher took us on a tour.  Sylvia had sent some pictures the previous April, and I thought the flowers were lovely, but it hadn't dawned on me that there existed a garden Ned had planted and tended for years.  I was dazzled by the structure and the wonderful combinations of shrubs and perennials Ned had put together.

Above, you are seeing only part of the garden near the entrance, which has a certain formality to it.  Clipped boxwoods, barberry hedges,  Amsonia hubrichtii (the lacy foliage and light blue flowers in the left foreground) and the white flowers of Deutzia gracilis coming into bloom in the background - it was a stunning arrangement of texture and color.

The rest of the garden is actually quite informal, and if I had to describe its look, I'd say "country garden."  Rustic paths - mostly gravel lined with stones - wind throughout, and toward the back, there are bird houses, a sitting area and a patch of lawn.  Over to the left of the entrance is a rose garden.  There were irises in bloom and a large philadelphus about to pop open, plus other perennials planted along the paths.  A sweet shrub near Ned's detached "office" was in bloom and sent off its unmistakable fragrance as we walked by.

I am only hitting the highlights, of course, as there was plenty more to see in the front shady areas - ferns, hostas and hellebores and yet another stand of roses right along the driveway.

I hope to go back to Raleigh soon to see what happens in October.  Meanwhile, I am happy that Ned took what I dream of having someday (a large, sunny flat lot) and made it into a charming garden.  I know he's been working long and hard, but he has created something very, very special.

Below:  1)A Japanese maple in its spring beauty along a path that has a country garden feel and 2) the climbing Schizophragma hydrangeoides 'Moonlight' near the back of the garden. 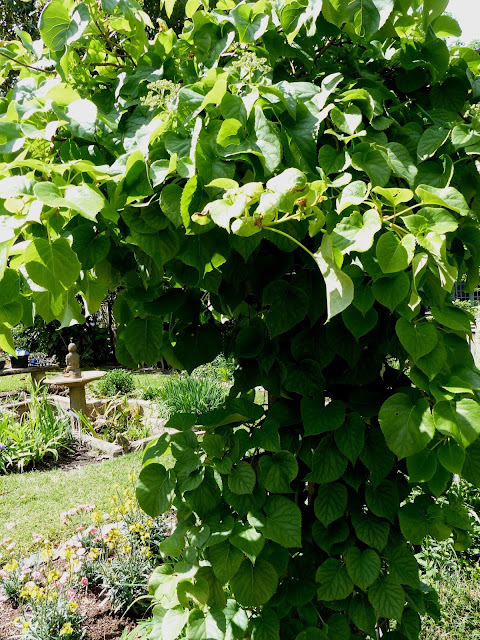