A gift of green 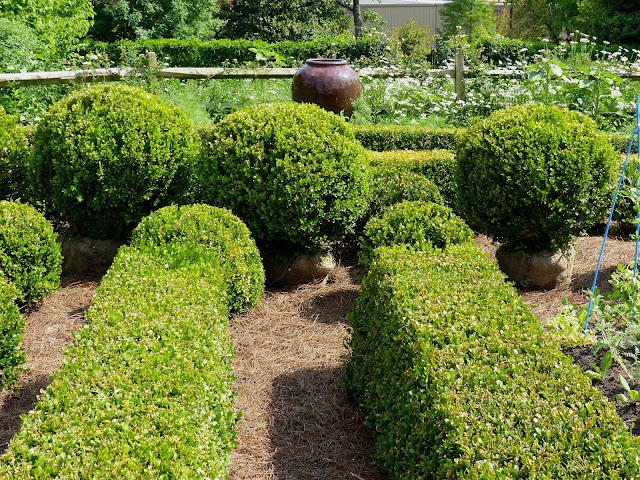 The other day I did a favor for someone, and in return he offered me at least two dozen Korean boxwoods he had in containers in his back yard.

At first, I protested.  I hadn't considered what I did a favor, just helping someone out when he needed it.  If I really think about it, I owe this person much more than he could ever owe me, if we were keeping score.  He has come immediately when trees fell across my driveway or when pipes froze and broke at the little house.

He is insisting that I take the plants, and I have been roaming around in the heat, trying to figure out how to use them.

What I really want is a flat, sunny space like the one you see above.  The two hedges on either side are maybe twenty feet long and form a narrow allee.  This section reminds me of the hedges we had at home in a side yard.  I spent a lot of my childhood crouched behind those clipped hedges while playing Kick the Can or Hide and Seek.

But here where I have lived for 43 years, there are no flat spaces.  Well, I've created one - a lower gravel area surrounded by a double line of boxwoods and hemlocks, the latter looking the worse for wear after a summer with 90-plus degree heat every day.  I could break up that large rectangle with some sort of parterre, using the new boxwoods.

If I could figure out how to get around the City of Atlanta, I could use those boxwoods in a different formation.  Back in May, I had been inspired to cut down three giant trees that should have been removed when we built this house.  They are on a berm across the parking court in front of the house.  My son-in-law pointed out that the biggest one appears to be leaning toward the upstairs room where my granddaughter sleeps when she visits.

So, I re-imagined this space - one of the only sunny spots on the property - with the trees and berm gone, and a level, boxwood-edged garden in their stead.  I would somehow move the climbing roses that are languishing in the shade and grow them on tuteurs.  I would also have some room for sun-loving perennials.  And, I would use two of the twenty fastigiate boxwoods I'm keeping alive to form an arched entrance.  The gift of boxwoods could form either a rectangular or oval border of low hedges.

But, the city arborist drove up (we have to have a permit to cut down a tree in Atlanta) and turned around so fast, I knew my plans were sunk.  In a couple of days I received the rejection letter.  There would be no roses billowing off giant tuteurs, and the berm is so uneven, you couldn't have any sort of box border.

Of course, that dreamed-up garden wouldn't have looked anything like the one in the photograph above.  Actually, that is Alex Smith's nursery, which is where he grows out plants for his landscape and garden design clients.  He has it arranged like a garden, and you can get tons of ideas by just walking through.

I'm going to keep my thinking cap on and try to figure out how I can take advantage of this generous gift and of that area of sun.  I had a friend who wished for a tree to die, and it did.  I won't go that far, though, because I might end up with a giant poplar crashing through the roof.  There must be another way.  I'll keep looking through books and magazines and on Pinterest.  Something will come to mind eventually.