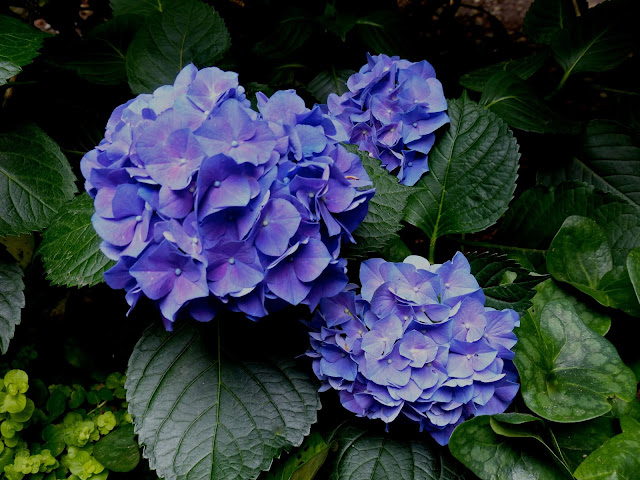 Driving back from a doctor's appointment today, I almost ran off the road.  In fact, driving in the last couple of weeks has been dangerous.  At last, after two years of a paucity of blooms, the Hydrangea macrophyllas are putting on a spectacular show.

The two bushes that nearly caused an accident had deep royal blue flowers.  One was a lace cap that was about the diameter of a soccer ball.  The other was a mop head in the same rich blue, I'd say royal blue but bordering on navy.  Both shrubs were covered in blooms.  If they hadn't been on such a busy road on a dangerous corner,  and if I'd had my camera with me, I would have stopped and asked permission to take pictures.  And I still may get up my nerve to ask if I can having a cutting or even do a layering.  I've got to have them both.

Back at home, I've been lucky so far that the deer haven't gotten into the macrophyllas.  They did chomp on the Annabelles, but I have the remaining blooms "roped" off with fresh blue fishing line.  What I want to make sure of is that Mother's hydrangea doesn't get eaten.  It is so special to me and has been through some weird changes ever since it was moved up here.

It arrived by surprise one winter in a giant plastic pot.  At first, I didn't know what it was.  Then, the nice men who brought it told me they thought it should be up here, as down there it was in vicious afternoon western sun.

It stayed in that pot for two years.  The first June, the flowers were the loveliest purple-grape color - not as dark, glowing purple as they had been at the farm, but still very beautiful.

But, the second year, the flowers were a sickening Pepto-Bismol color.  That spurred me on to have it planted in the ground.

The next June in my soil brought enormous blooms of a medium, bright rose color with a blue eye - very showy, but not what I had hoped for.  Last year the cold got the plant, so I had not so much as a single flower.  The number of blooms this year is disappointing, but we're getting back to a deeper, richer color in the purple range.  I've taken dozens of photographs of the blooms, and they all look different - some blue, some purplish, but none exactly right.  I've gone out so at so many times of day, trying to capture the purple color, but it just won't work.  I hate to toy with the contrast or exposure, so this is as close as I can get.  It looks blue, but it's not.  And, it is a bit darker than it appears here.

But enough about my hydrangeas (I have a lovely light blue one that looks like it should be at a baby shower; ditto a pale pink one I rooted from the Piedmont Driving Club, and I think it's going to stay that color).

THE AMERICAN HYDRANGEA SOCIETY 'S 22nd annual tour is this Saturday, June 11, 2016, from 9 a.m. to 5 p.m., rain or shine.  Seven gardens are on the tour, and with this bonanza year, it will be breathtaking.  The tickets are $30 for one, $40 for two in a family.  This price entitles you to tour the gardens and makes you a member of the AHS.  Meetings this coming season will be at the Atlanta History Center, and you'll enjoy informative talks and beautiful photographs by hydrangea experts from around the world.  The meetings are on the fourth Monday of the months of October, February and April.

Below:  Mother's hydrangea two years ago (compare to the top photo);  Lacecap planted by the late Margaret Moseley (probably 'Larnarth White').  Back in my garden:  one I rooted that is a lilac color. 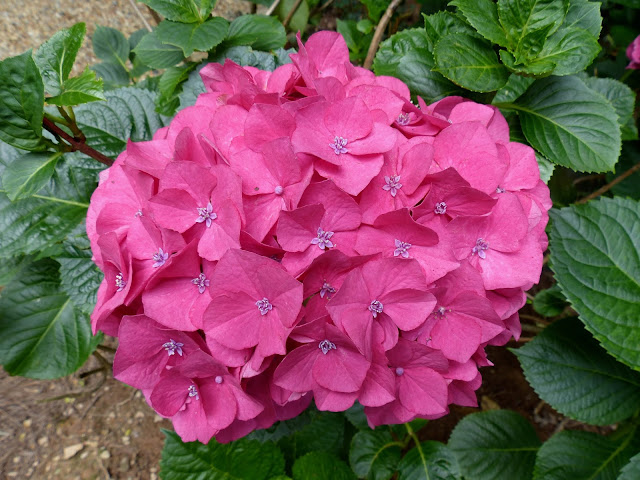 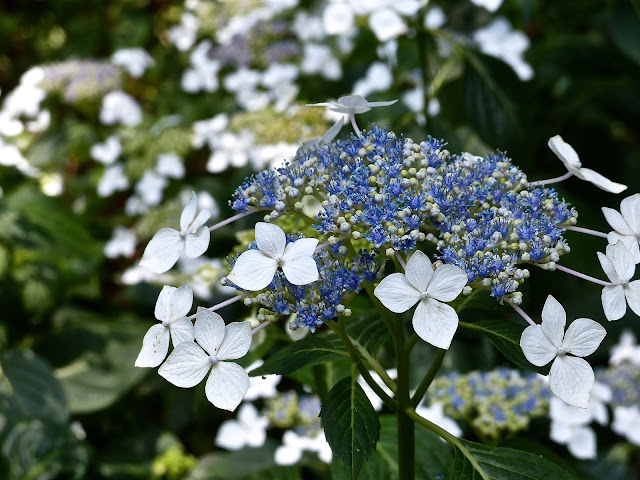 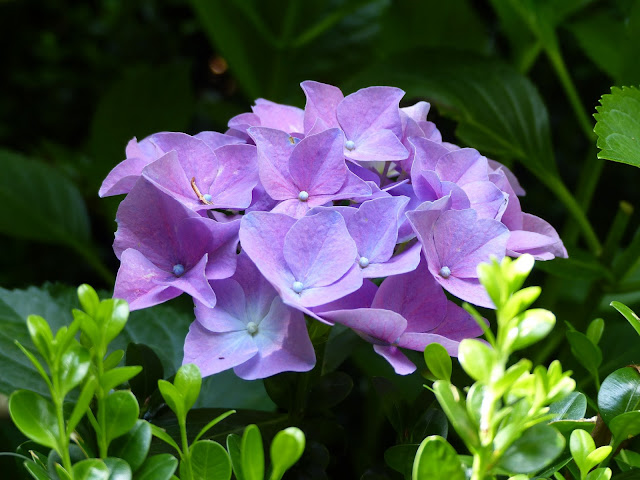