A garden's entrance and memories of arches past 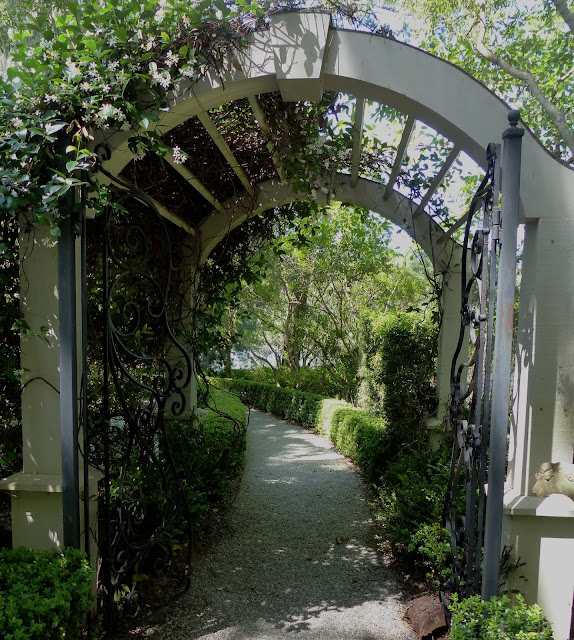 As I approached this garden's entrance in St. Simons, Georgia, a flood of memories came rushing back.  First, I have to say that I was entranced by this entire garden, which was on a tour last weekend.  It had all the elements I love - arches, hedges, gravel paths, with exuberant vines everywhere (example:  a dusky pink, wild-looking rose billowing from a live oak tree; fragrant Confederate jasmine outlining the back door).

But the memories.  I saw this arch and thought immediately of my late husband's folly.  He was a part-time gardener, that is, he went mostly in spurts and frequently abandoned projects midstream.  He had seen a similar entrance arbor like the one above in a Smith & Hawken catalog.  So, in spite of dozens of other projects that needed attention around our house, he set out to re-create a rose-covered, white wooden garden entryway up at the little house.

Only, the "entrance" he had two men build was not an entrance at all, but a free-standing arch that led to nowhere.  Once you stepped through the impressive structure, crunching the pea gravel underneath, you were at a dead end.  Well, not exactly, but you would have had to step down a slope covered in raucous Vinca major to get anywhere.  This was especially dangerous, as you would have to have legs five feet in length to make the giant leap to the next level.  Your best bet was to slide through the vinca and just hope.

But, he was proud of the arch.  There were six round columns, three on each side.  The white wooden columns, discarded by a law partner who was renovating his house, were connected at the top by  beams; perpendicular cross pieces formed the canopy.  While the one above is fancier, with iron sides, a gate and an arched top, my husband's looked remarkably similar.

That first year, he planted an old fashioned annual vine called Dutchman's pipe.  It was much too rustic for his elegant white pergola, but the thing did have a lot of leaves and a few crazy-looking blooms.

The next spring, I suggested digging a 'Dorothy Perkins' rose (the most popular rose from Jackson & Perkins in the early 20th Century) that was growing a few feet away.  Instead, nothing was planted.  The arch stood without adornment.

Not too long after my husband died, the bottoms of the columns began to rot.  Even though the wooden plinths at the base were up on bricks, they rotted, too.  The guys who built it had long since moved away, and no one seemed to know how to fix it.  Every workman who looked at it was a naysayer.  When you lose a spouse suddenly like that, you have a million other things that take up your time and efforts.  I just didn't have the gumption to tackle the project.  At last, the whole thing collapsed.

So, I felt a little glimmer of guilt and sadness at seeing this entryway.  But, it also made me smile thinking of my husband and his arch to nowhere.

This one was partly covered in Confederate jasmine.  Below, you can see a view of the other side.  I loved walking down that boxwood-lined path and coming out into the open garden overlooking a lake.  The house was set among tall live oaks dripping with Spanish moss, and the narrow, winding road leading to it was like being in an enchanted forest.  I'm sure their wooden arch in such a humid climate requires a lot of upkeep, but it adds to the magical setting and for me brought back some bittersweet memories. 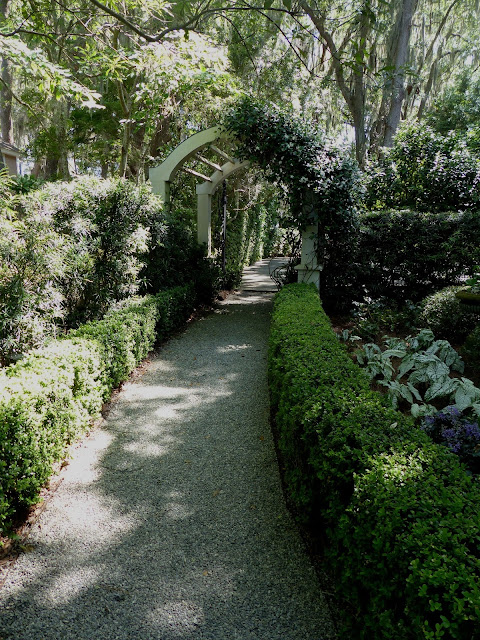 What's in your garden? 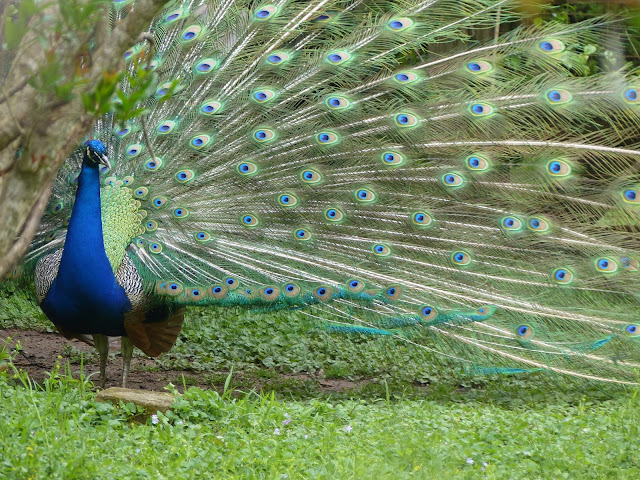 It was a dreamy day.  Four of us drove to Americus, Georgia, to visit the inimitable Furlow Gatewood, famous designer, New York antiques dealer, tastemaker and gardener.  At 95, he is still witty and urbane and very active.  We took a picnic, and he came out with a huge bag of cheese straws he'd made himself.  Furlow insisted we spread our lunch at a large round table in the solarium of the main house, which was formerly his mother's barn (that's what he called it; I think it was actually a carriage house).  It's the largest of the structures on the expansive property, which has been in his family for generations.

Marsha Powell from our Flower Guild team at church arranged the excursion.  Her father is from Americus, and his brother was a childhood friend of Furlow's.

Hidden behind a curtain of trees, Furlow's collection of houses and cottages - all decorated in a style that can only be called genius - contains stunning antiques, some rustic, some more sophisticated and rare - gathered throughout the years.  Interesting fabrics and slipcovers are everywhere.  I asked him about a particular pillow, and he said he'd seen a dishtowel he liked, so he bought several pieces to cover the pillows.  On another pair of chairs, he had turned the fabric inside out, because he liked the "wrong" side better.

I have his book,  One Man's Folly, and it shows this magnificent compound and details of many of the rooms in the four decorated houses (another cottage is actually the chicken coop where Furlow gathers fresh eggs every day).  Another elegant little building contains garden tools.  Yet another outbuilding houses antiques that aren't being used at present.

Seeing all this in person on a cool spring day, the floor to ceiling windows open, and the fresh air drifting in, peacocks squawking and jumping about on the roof or sauntering among the gardens - it was almost otherworldly.

Furlow must have a hundred giant snowballs (Viburnum macrocephalum) planted in rows here and there.  Below is a tree festooned with the white version of Lady Banks rose outside one of the cottages.  I have more photographs to show in another post very, very soon. 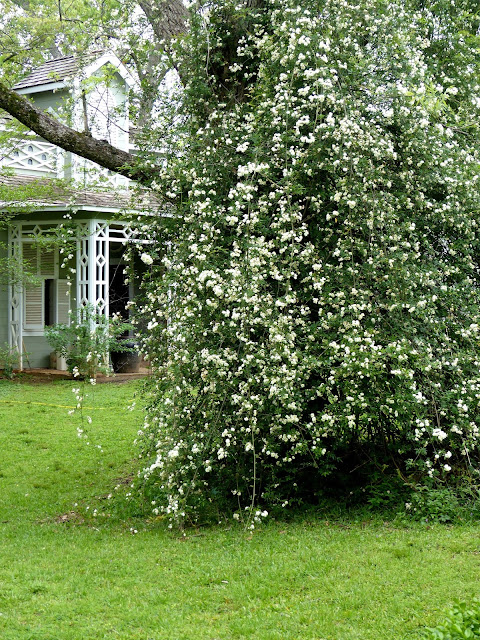 Posted by Martha Smith Tate at 11:06 AM No comments: