Is this my garden? 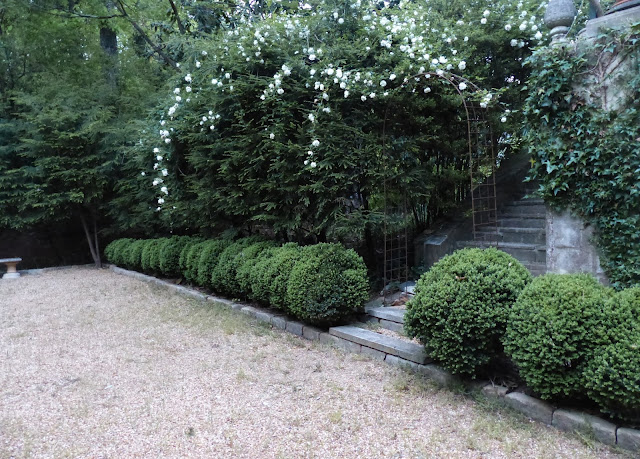 For at least two weeks, I have been in heaven.  The white Lady Banks rose I planted several years ago finally topped my hemlock hedge and spilled over the sides and rambled across to an iron arbor covered in trumpet vine (not visible here).  I couldn't believe that this was actually my garden.

For years, this area was a disaster.  What had started out 30 years ago as a croquet lawn with sodded zoysia grass surrounded by a hemlock hedge and English boxwoods, eventually disintegrated into a sparse patch of weeds that got mown only occasionally.   It was just too shady for any kind of grass.  I finally gave the croquet set away, as the mallets and balls had languished unused after a few games in the early days.

In exasperation and trying to buy myself some time to figure out what to do, I covered the area with black landscape cloth.  That was fine for a few weeks, but the weeks turned into months, then to years, and weeds popped up between the seams.  I put my head in the sand, so to speak, and wouldn't even look down from the terrace above if I could help it.

In 2013, my daughter became engaged and wanted to have the wedding outdoors at our house -something I said I would never, ever do.  I gave in, and the decision forced me to go into high gear. There was no place for about 20 people to gather for the small ceremony.  We could have a tent in front for a bigger reception later, but to line up chairs and make an altar (her childhood minister agreed to do the ceremony) and have room for a cello and violin was problematic.  I didn't have a room large enough inside, and we needed the back terrace for a bar and the cake and for people to just get away from the band at the reception that followed.

I had already made a small, narrow arch garden on the opposite side of the house, but there wasn't room for twenty people to stand, much less sit.  For that area, we had used tiny pea gravel with sharp edges that were not slippery like the rounded gravel I had in the front parking court.  What if we could take up that terrible black, messy cloth, edge the rectangle with cobblestones and cover the ground with this small pea gravel?  I already had 4,000 Belgian blocks - very heavy ballast stones - stored at the farm; the cobblestones had been in the front parking area, but kept sinking.  A few years before, at great trauma and expense, I had them dug up and hauled the 40 miles to Chattahoochee Hills to deal with later.

Long story short, we created the "lower garden" in back, and that's where we held the small ceremony.   The wire arch you see was used along with two handsome wire obelisks I borrowed to make a sort of altar.  For the greenery,  Elizabeth Dean contributed long strands of Italian ruscus (Danae racemosa) to go with smilax vine from Alabama.  A bigger reception took place under a tent in front, and guests wandered all through the house.  Most important of all, it was a perfect October evening, although I had already lost a good ten years off my life worrying about the weather.

There's still much to be done - perhaps plant foxgloves behind the boxwoods to the right and add a climbing rose to cover the wire arch which needs to be stabilized.  Maybe put out some French cafe chairs and a small round table and more benches to enjoy a cocktail before dinner (as if I ever throw any dinner parties!).

Still, I'm ecstatic.  On a recent evening, just at dusk, I stepped out onto the terrace and looked down.  A stretch of cool weather had preserved the roses that glowed in the low light.  For a moment it seemed that finally, after years and years, I had, at least temporarily, a dreamy garden scene in a place that had once been a nightmare.

Posted by Martha Smith Tate at 7:26 PM No comments: