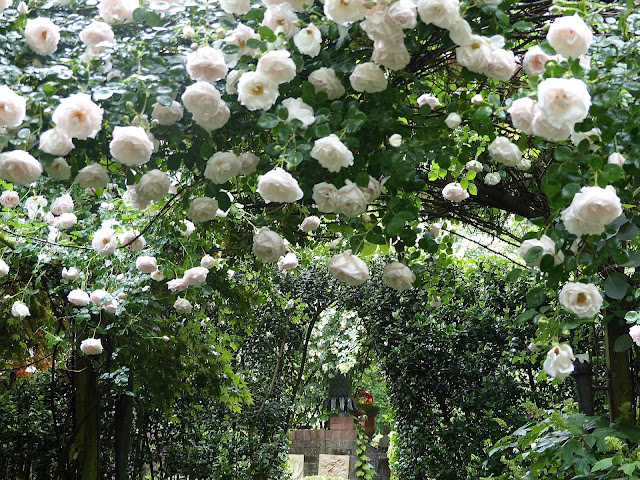 For the first 18 years of my life, my family lived in the small town of Palmetto, Georgia.  At the time, I thought I was deprived, because we didn't have so much as a Tastee-Freeze or any other spot where we could hang out (what would I have given for a drive-in hamburger joint with waitresses on roller skates!).  I later came to appreciate what I did have - five acres to explore and a setting (complete with a scary ancient lady next door whose house I could spy on through a tall privet hedge) that fueled a child's imagination.

The pre-Civil War house my parents bought in 1941 came complete with all kinds of fruit trees, big vegetable gardens and great places to play Hide n' Seek and Kick the Can.  There were lots of flowers, too.  My mother had a rose garden, which was her pride and joy.  She grew enormous blooms and would cut them for the house or to take to people.  Sometimes she put arrangements in the church.  Her favorite was the pink grandiflora rose, 'Queen Elizabeth.'

But, Mama's rose garden really wasn't very pretty.  It consisted of hybrid tea and grandiflora bushes, arranged in rows.  She grew her roses, not for garden beauty, but for cutting.  There were a lot of these sorts of rose gardens in the 1950's, when hybrid teas were so popular.

In the 1980's, people started planting more garden roses, that is, plants that looked pretty on fences or arches. These roses had always been around, but had gone out of fashion.  I longed to have them at my house in Atlanta, but I didn't have enough sun.

Then, one Sunday afternoon four years ago, I came home from church to find a 40-foot-long limb from a giant white oak tree lying in my driveway.  This enormous tree had hung over my house since it was built and cast a huge amount of shade.  I had to have it taken down, and in its place I made what I call my arch garden.  I would now have sun!  I quickly ordered own-root climbing roses from Pat Henry at Roses Unlimited in Laurens, South Carolina.  I would be able to sit here at my computer and look out at big, cabbagy roses climbing my wall and growing over the arches.

But, it was not to be.  The sunlight I counted on did not materialize.  Ironically, I had been the author of articles advising people to watch a spot for a year to know the sun-shade conditions so they would know what to plant.  I didn't practice what I preached.

So, I have moved all but two of the roses into containers to await a home.  The remaining ones are languishing, but I'll rescue them soon.  On the opposite side of the arches, I planted Confederate jasmine - not at all what I'd pictured, but at least it's fragrant.

But I did finally realize that there is sun now that the tree is gone.  It's just not where I wished it to be.  In fact, I had planted camellias there, and they are scorching and will have to be moved.  There are three big trees in the very place I need to plant roses.  One is a 100-foot-tall poplar that to my mind is leaning toward the house.  I had the City of Atlanta come out last week to see if I could take it down.  They refused to issue a permit.

The solution is going to have to be that the climbing and pillar roses ('Cl. Iceberg', and I've forgotten the names of the others) will use the trunks of the trees in the sun as their "tuteurs."  The sunny garden I'd imagined will have to be re-designed.  Right now, nothing is coming to me.

It remains to be seen how I will fare.  I keep checking the view from the front window all day long.  There is direct sun, at least for now.  I also noticed last summer, when the camellias started to look sketchy, that I had sun for most of the day.  If there can be any roses for me, this is where they'll have to go.  I will have to put fishing wire around them and hope it will fool the deer until I can get something permanent.

It's going to take a lot of study to figure out how this awkward space can look like a garden.  Unlike my mother, I want garden roses rather than a rose garden.   Last week, I ordered a song from ITunes.  It's called "My Heart Reminds Me," sung by Kay Starr.  It was the favorite of my friend's mother.  There's a line that says, "If there could be no roses."  I've thought of those words so many times in my quest for lush roses like in the photograph above (from Ryan Gainey's garden in Decatur).  Maybe this new scheme will work, and there can be roses for me.  We shall see.