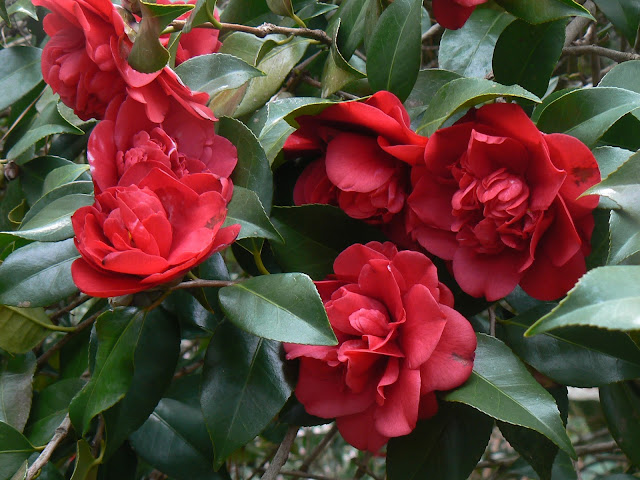 I estimate that for the last 20 years (at least), I have taken a photograph of this camellia in Margaret Moseley's garden.  Margaret bought it as Camellia japonica 'Governor Mouton'.   If you look at the picture in The Illustrated Encyclopedia of Camellias by Stirling Macoboy (Timber Press, no date), the flower looks like my photograph above.  Here is the written description:

"Introduced in the early 1900's by an unknown grower, 'Governor Mouton' is a medium-sized camellia of semi-double to loose peony form and vigorous growth habit.  Coloring is oriental-red, often splotched with white."

While there appear to be tiny spots of white in this particular photograph, all the others I had taken through the years showed solid red flowers.  I love Margaret's plant because it produces bright red blooms all winter that grow in large clusters.  You can see it from all the way across the garden.

But when I went out to the garden on February 2 of this year, I was shocked to see that 'Governor Mouton' did not look like 'Governor Mouton' at all.  There were no "oriental-red" flowers.  In fact, most of the blooms appeared to be dark rosy-pink.   And, much to my surprise, there were several variegated flowers.  I had never seen any such blooms on the giant shrub (must be 15 feet high by an even greater spread).

So what has happened?  Despite my wish to start a camellia walk on my property, I never did.  I now have several camellias, but some of them are struggling (I have now discovered the only sunny spot around my house - the very place I planted most of the camellias;  I have moved three back into more shade; the others I'll move after they stop blooming).  I have seen camellias on one shrub have different colors (not due to the understock).  I've also seen a branch that was a sport and had some variegation where the other flowers are usually solid.

But, for this 'Governor Mouton' - reliably red - to change colors all over the plant was shocking.

What I was trying to say two paragraphs ago is that I don't have enough mature camellias to know why or how often this happens.  The one plant that was here when I came in 1973 has never changed color nor had a sport or any variegation.

I meant to join the North Georgia Camellia Society years ago, but due to time constraints, I didn't.  The members with experience would know about this phenomenon.  I'm curious, though, that an entire plant would change - not just a branch or two.

At any rate, I hope 'Governor Mouton' will turn back to red next year.  It has been one of the prettiest sights in Margaret's garden, now kept by her daughter Carol.  The rose color is nice, and the variegated blooms stand out, but I like the plain old red. 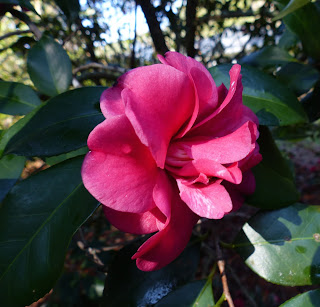 Above is the color of the flowers this year.  Below is one of several variegated blooms. 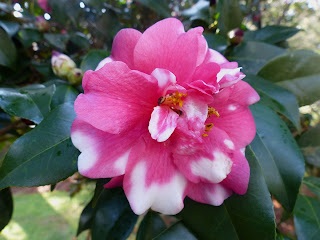 Posted by Martha Smith Tate at 8:43 AM