The garden: The pain of discipline vs. the pain of regret 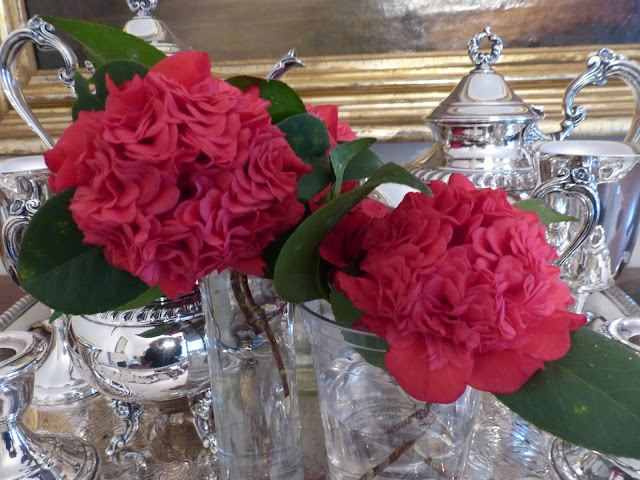 The weeks before Christmas, as you know if you live in the eastern half of the country, were unusually warm.  Every so often, such a warm spell will occur (not as prolonged and hot as this one), causing the mid-season camellias to come into bloom.  This was the case in December.  All month long, I was able to keep the red blooms of 'Professor Charles S. Sargent' in cups on my silver service in the dining room.

But these weren't my flowers.  They were all purloined (I'm using that word to make me feel less guilty).  The first batch came from a serendipitous discovery I made near the garden I designed at our church (how did I have the temerity to do this when it involved tens of thousands of dollars worth of plants and the entire future of our Flower Guild?  I was not qualified!)

Anyway, I was checking on the condition of the plants we'd put in - lots of rain in November turned out to be a good thing; I don't think any of the roots drowned - when I noticed some bright red flowers next to a magnolia tree on the lot line.  Camellia japonica 'Professor Sargent'!  I admit I picked a few, rationalizing that the blooms would not be seen and thus not used or appreciated.  Then, I'll confess that I went back a second time in my church clothes and snipped a few more.

But that was it for stealing from the church.  My next adventure took me to the vacant lot on the hill above my house.  I was trolling for some variegated osmanthus (false holly, and it's painfully prickly, too) when I glanced over to my left and saw the red flowers.  'Professor Sargent'!

This time I felt it was okay to take the blooms.  No one as far as I know goes up there except for my dog and me.  I do pull ivy off the beautiful old trees up there, so I am rendering a service.

I loaded up on the red camellias to bring down to put on the silver service.  That's really a beautiful combination, I might add.

But, truth be known, I should have been picking my own 'Professor Sargent' camellias.  Long ago, maybe 20 years ago or longer, I bought a large 'Professor Sargent.'  I'm ashamed to say that I couldn't decide on a place to plant it, so I let it stay in its container year after year.  It would bloom -not a lot - and I would promise it over and over that I would find it the proper home.

In 2006, when I thought I was going to have to sell my house, I let a woman come and take a lot of my shrubs.  She was a friend of my parents' in-home caretaker and crazy about plants.  I gave her several camellias and let her dig other plants (I can hardly stand to think of how much I let walk out of here).  She got the 'Professor Sargent', of course, and the 'White By the Gate' and the 'White Empress', among others.

I can't even imagine how large these camellias would have been by now.  I can only console myself that the spot I'd thought about for 'Professor Sargent' would have cut off the view I have of a lot of twisted trees my neighbor left after a mini-tornado hit us.  Also, I wouldn't get to see the deer caravans, as I call them, pass through.

Back in early November, we had a Sunday School teacher who told us that if you don't suffer the pain of discipline, you will inherit the pain of regret.  That's what happened to me way back when.  Had I made good, disciplined decisions, I would not have been stealing red flowers from other sources.  The camellias the woman took would have been much too large to dig, and I would have flowers galore now,

This blog serves as a perfect example of my bad habits.  I have neglected it for two months now, using the excuse of having to clean and decorate my house to get ready for company at Thanksgiving and Christmas.  How I feel the pain of regret in not sitting down to write.

So now, I must either adopt this new way of doing things, or sink back into the abyss of constant regret.  Already, I have been punished by the absentee neighbor's giant dead pine tree falling into my driveway and blocking any passage.  I still haven't received the bill from the nice man who rushed over here in the rain with his chain saw.

I hope I don't experience any such retribution from the church.

With this post, I am going to start my new life of discipline.  Even though I haven't finished taking the Christmas decorations to the basement, I am officially adopting this new idea of one pain vs. the other.  I keep hearing about people my age re-inventing themselves.  Well, here I go.  I am choosing the pain of discipline, and I look forward to being free from this very intense pain of regret!