An invasive aster for everyone but me 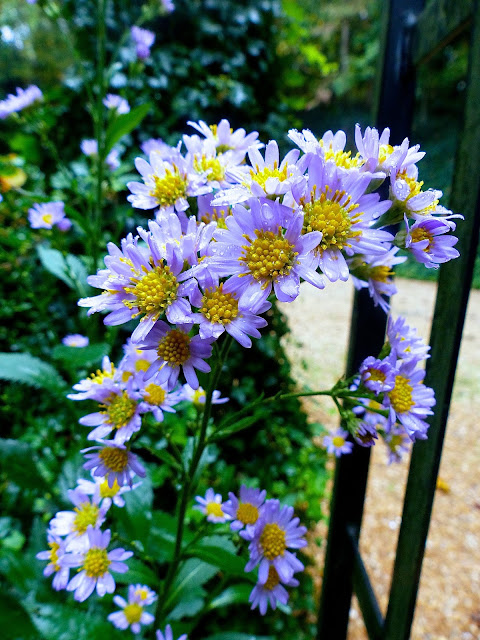 This is a close-up of part of the one Aster tataricus I have in my garden.  This is ironic, because this fall-blooming flower spreads readily and can take over an area before you know it.

But, at my house it's different.  The deer kept eating the new foliage, so I never got a flower where I had planted them years ago.  In the spring,  I moved several to a safe place behind some fishing line attached to iron arches.  Only one plant shot up and bloomed.  The others remain rosettes of foliage on the ground.

This is in contrast to the behavior of this tall, invasive flower.   Jeane Jones of Dalton, who inherited her mother-in-law's garden and expanded it greatly with gifts of plants from the late Margaret Moseley, read my post where I mentioned Aster tataricus.  She sent me a stunning photograph of a bank absolutely covered with the flowers.  Here is what she wrote:

"Just read your post.  I think these are the asters to which you referred.  These were planted by my mother-in-law decades ago, thankfully between a brick retaining wall behind them and the driveway.  They are very aggressive but great when contained like this.  Some years ago I discovered that cutting them back to about 3 ft around the 4th of July produced beautiful blooms on a more compact plant that requires no support.  Otherwise they reached 6' and fell over.  They bloom the whole month of Sept. and into Oct. and many passers by ask me about them."

I also think of the huge expanse of these flowers in Liz Tedder's garden in Coweta County.  Everything there is on a huge scale, so I'm sure she would be amused if she could read that I'm thrilled over only one plant.

But that's the way it often is.  A spring ephemeral will come up, last a few days and then vanish.  Still, it's a joy to stumble upon a flower in the woods, especially one that has appeared for the first time.

It is rather laughable that I have gone out every morning to admire this one aster slowly opening.  But, it has been so much fun watching the stem shoot up and then seeing the little blue daisies unfurl.  Whether they are in masses or come up as a single specimen, flowers provide so much pleasure and remind one of the miracles that can spring from the earth.
Posted by Martha Smith Tate at 8:22 AM 1 comment: