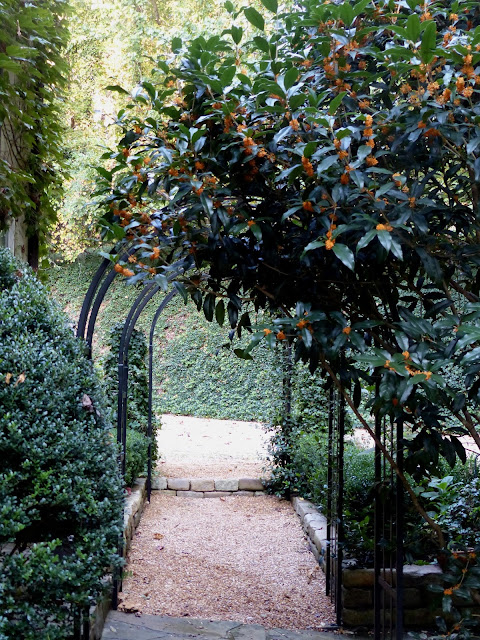 These days when I drive up and park in front of my house, I am almost knocked over by a sweet fragrance.  It's coming from the orange tea olive, Osmanthus fragrans var. aurantiacus.

What is so unusual about this is the location of what is now a tree some 15 feet tall.

First, I have to explain how my house is configured.  There is a center facade, and then there are two wings that jut out on the sides.  So, that means the fragrance of these clusters of tiny orange flowers has to travel from about 20 feet along the side of the house, then turn left around the corner for another 16 feet, and left again for another 15 feet to reach my car door.  That's a pretty amazing scent that can perfume that much space, especially when it is blocked by the two-story wing of the house.

By contrast, I have what I bought as Osmanthus fragrans 'Fudingzhu' growing (or marking time, I should say) right on the edge of the parking area.  This selection of tea olive blooms white, with showy clusters of flowers; it is purportedly super-fragrant.  I have had this plant for several years.  When it didn't grow where I originally had it, I moved it to its present location where I thought it would knock people over when they arrived at my house.

But that hasn't happened.  The plant is either extremely slow-growing, or I got hold of a specimen that is an anomaly and may never grow tall.  At present, it tops out at under two feet.  The flowers are there, but I literally have to touch my nose to them to get the fragrance.  Maybe after a few more years, it will grow taller and produce more flowers and the sweet scent one would expect.

For the time being, I would like to recommend the orange tea olive.  It's probably in some nurseries right now, as it is in full bloom.  It was about a week and a half ago that I drove up, got out of my car and realized that the tree must be blooming.  I'd seen the buds, and this experience let me know that for the next three weeks, I'd come under the spell of this extraordinary September-blooming plant.

I took this photograph yesterday as the sun was setting.  Just heavenly!
Posted by Martha Smith Tate at 6:50 PM 2 comments: