X marks the spot in this garden 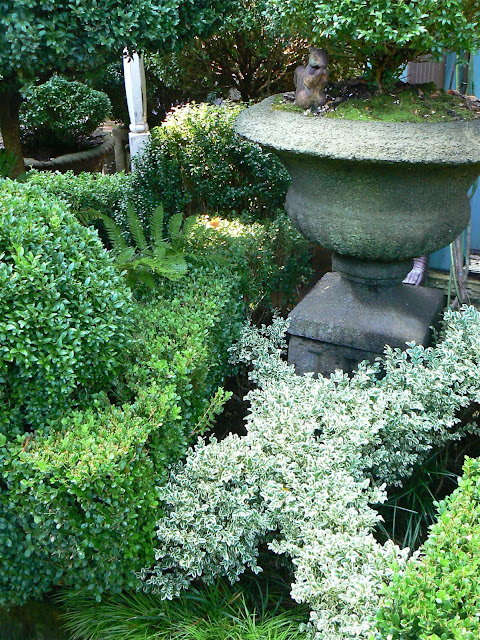 I realized while looking through photographs taken in July that I must have hundreds of scenes from Louise Poer's tiny Atlanta garden.  This is pretty amazing, because her garden occupies such a small space, maybe 10 ft. x 40 on the side of the house.  At the back, I don't think the garden is much wider than the room I'm sitting in.  Again, that section might be 40 feet long, if that.  Despite these tight measurements, the garden is jam-packed and full of great design ideas.

Louise lives in a small enclave of cluster homes, not far from my house.  Once in a while, I will go over there on the spur of the moment (the last time was to get her helper in her high-end garden design business to install a baby car-seat), and the garden is always in pristine condition.  Plus, there's usually a brand new vignette she's created or one I've never noticed before.

While there are spots of color throughout the seasons (foxgloves, delphiniums, roses, lilacs), the beauty of the garden depends heavily on texture, which, after studying gardens for decades, I'm finally beginning to understand a bit better.  When we had the television show on HGTV, gardeners would talk a lot about texture, but in broad terms.  In this garden, it's easy to see.  The small leaves of boxwoods (which form most of the "bones" of the garden down low) are contrasted with grassy acorus, the broad strokes of cast-iron plant, the spiny foliage of holly and the frothy (or spiky) needles of conifers.  In summer, various ferns are plugged into spaces in the ground or in containers, adding yet another contrast to the boxwoods.

Variegation (both white and gold) is also important in this garden, as are different shades of green (bluish, deep and dark, or chartreuse).  As you enter the garden at the side of the house,  green and white variegated Algerian ivy climbs a tree.  There are hostas and ferns in this mostly shady area, along with, surprisingly enough, dwarf conifers (I figure they are placed so as to catch shafts of light).

In this photograph, green and white variegated boxwoods form an "x" at the base of a planter.  The heavy white margins of the leaves brighten this area along a long, curving path.

Louise used to live in England and goes back often (and to other European countries) to look at gardens.  She's not afraid of change and freely admits that she works hard so that she can fund her gardening addiction.

I always get inspired when I open her garden gate.  It's about time to pop in and see what she has going.  It's never a slow time in her garden.  I know that right now, a tall Hydrangea paniculata is arching over the area that leads to the entrance gate.  This is one of my favorite scenes of any garden ever, so, even though I've shown it in the past, I'll go over and see if I can catch it in a different light.  Also, I'd be interested to see if that "X" is still marking the spot.  I think I'll give this a 50-50 chance.  She might have come up with something completely different.  One never knows.
Posted by Martha Smith Tate at 7:03 AM No comments: