Decisions - if I had this same space 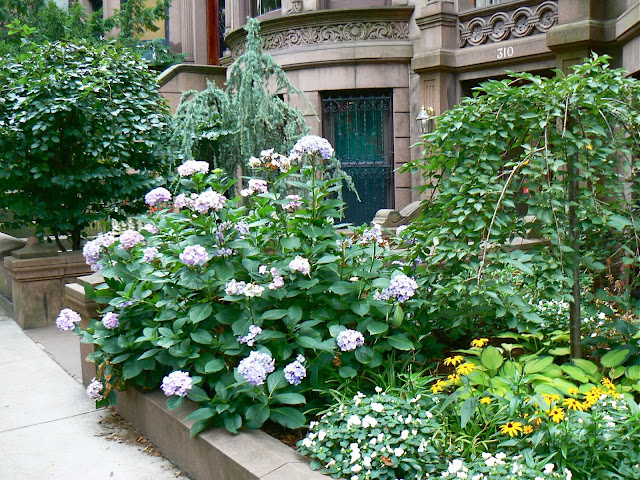 I took this photograph one day in July (in fact, on this very same day) in the Park Slope section of Brooklyn, New York.   The garden in front of a brownstone was on my walking route (this was when my daughter lived in a neighborhood near Prospect Park).

As I would pass by various spaces in front of the vintage houses, I made it sort of a game to re-landscape everything.  This is one I decided to keep just about as it is.

It's a little unfair to judge a garden in mid-July in a place that sometimes sees 100 degrees and high humidity (just a few days ago, it was over 100 in Brooklyn).  I could see how this space looked at other times.  Those hydrangeas were likely much brighter in June, and that looks like a weeping cherry tree to the right of the photo.  That would have looked pretty in April.  The hostas tucked in with the rudbeckia (black-eyed Susans), still look as fresh as they might have in late May.

The weeping Atlas cedar looks good year-round and lends nice texture and form to contrast with the globe-shaped tree (what is that?  I can't tell from my picture).  It looks like the owner plugged in dwarf impatiens in the foreground to bloom all summer and into fall.

Although this garden was quite nice, I saw others I'd re-design.  Some people did nothing, and there were just weeds.  You sort of hate to see this, as you can imagine that these four- and five-story brownstones are very expensive.  I guess if you're an absentee landlord or have wearied of trying to keep a garden, you don't really care that a visitor from Atlanta is judging you by what you haven't done.

Speaking of what hasn't gotten done, I should be the president of that club.  I have had in my possession now for many months, twenty fastigiate boxwoods.  I've dragged them all about, trying them in different places.  As I was looking through photographs I took in the month of July, I came across one that gave me an idea.  In fact, I am in the impatient, heart-is-beating-fast stage of anticipation of what I can do that will make good use of those plants, which I had coveted for years.

Some of the boxwoods are growing at a slant, with a slight arch. Others - mostly the shorter ones - are straight as arrows.

I've known for sometime that I am going to use four of the taller ones to form an arched entrance to some steps leading up by the back terrace.  Now I can envision most of the rest forming a series of arches at the edge of the gravel parking area on the right side of the house.  I will need to get some rebar and have it bent and anchored in concrete to form the arches.  Then, I can train the boxwoods on the forms.  I think this will work.  Those straight little ones I'll reserve as accents in the garden on the other side of the house.

Somewhere in my too-numerous books of slides is a photograph of Dan Hinkley's garden at Heronswood, the famous nursery he used to own on the Kitsap Peninsula across from Seattle.  He had trained fastigiate European hornbeams into arches outlining part of the garden (actually, if you Google Heronswood, you can see those arches).  Right now, I have camellias along that edge, but I need to move them - their shape is too irregular for the space.  I think I could do a shorter version of what Dan did.  One of the arches could be bigger and form the entrance to the deer garden (where the deer eat everything at present, but I have hope).

But before I worry about the latter, sunken garden, I want to experiment with these boxwoods.  What I need, in addition, is a trip to England just to visit gardens great and small for more ideas.  In the meantime, I want to go ahead with this plan this fall.  I can't bear to let Elizabeth Dean - who nurtured the boxwoods and sold them to me - know that they have yet to be put in the ground.  But, it's going to happen soon, now that I have a vision.


Posted by Martha Smith Tate at 5:53 AM No comments: