Wedding dreams that do come true 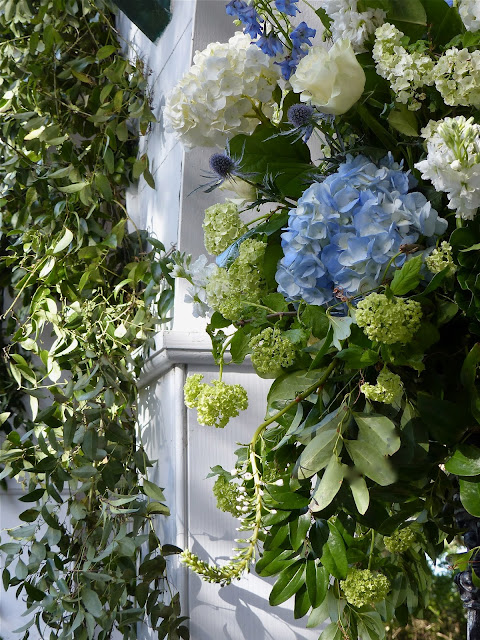 Two things I said I'd never do:  1) Have a wedding outside 2) Have a destination wedding.  Now I've done both, the first twice.

My older daughter's wedding was on October 5, 2013.  She and her then fiance had wanted to have the wedding at Pawleys Island, South Carolina, where our family had vacationed for forty years (we missed the year following Hurricane Hugo which destroyed half the structures on the island).  I said absolutely no, but then ended up having the wedding at my house in Atlanta, a very dangerous thing to do.  My friends helped me (or actually did all the work) to decorate with greenery and candles, fabulous flower arrangements and topiaries.  With all the twinkle and cafe lights we put up, along with chandeliers wrapped in greenery, tons of smilax vine, olive branches and rosemary and a glorious tent, the wedding reception was magical.  The weather, with its 40% chance of rain, held off until 24 hours later, when it poured at the time the reception would have started.

But, here I was again with my younger daughter.  She was not to be dissuaded.  It was Pawleys Island and no compromise.

So, I rented the 19th century Pelican Inn and prayed for good weather and a florist who would know how to transform the place.

On Sunday before the wedding last Saturday, I finally looked at the extended forecast.  Clear all week until Saturday, starting at 4 p.m., a 70% chance of steady rain.  The wedding was scheduled for 6 p.m., followed by the reception - outside, of course, as there is no large room in the Pelican Inn to escape the elements.

When I talked to my brother on Sunday evening, he checked another source:  that prediction had risen to 80% chance of rain.

By Wednesday, though, the wedding planner told me the forecast was improving.  On Thursday, a mighty wind passed through the area, and it was actually too cold to sit on the beach.  With it came a forecast of 0% chance of rain for three days.  Friday was magnificent, clear with no humidity.  The same held true for Saturday.

Still, I have lost years off my life, imagining 100 people huddled on the porch of the Pelican while rain slashed sideways and soaked us all.

Now, to another semi-worry.  How to turn the rustic Pelican Inn into a magical place.  I met with Andrew, owner of Callas Florist at Murrell's Inlet last October.  I told him I wanted lots of twinkle lights and cafe lights suspended from the live oak trees.  I also said I wanted smilax, an evergreen vine that grows mostly in Alabama.  I was worried, though, because in early May, broadleaf evergreens have new growth that wilts the moment it is cut.  We always have this problem at church.  He assured me he could get old-growth vines.

My daughter loves blue hydrangeas and wanted them for her bouquet and for the tables.  I also emphasized that I wanted any big arrangements to be loosey-goosey, which he said he understood.

The photograph above was taken the next morning and shows part of one of two large arrangements that sat on the ledge of the porch.  It also gives you an idea of the ambience he created with his artistry.  In the background is the smilax that outlined the tall arches of the wide porch, with its hammocks, rocking chairs and joggling board.

As you looked down onto the dance floor and out into the live oaks that grow between the inn and the dunes, endless ropes of tiny white lights glittered as dark fell.  Andrew had lined the wooden walkway to the beach with candles and had hung lanterns all through the tree branches.  Larger cafe lights lit the dance floor below the porch.

So, my nightmare of five inches of rain (which actually fell sideways the weekend before when a tropical storm formed off the coast) didn't happen.  Instead, it was a perfect night, with the sun setting  on the marsh across the beach road as everyone arrived at the reception.  As night fell, it all became magical with a million stars suspended from the dark branches of live oaks for as far as you could see.  It really was a wedding dream come true.
Posted by Martha Smith Tate at 10:42 AM 1 comment: