All I need is 50 years and a strong wood chopper 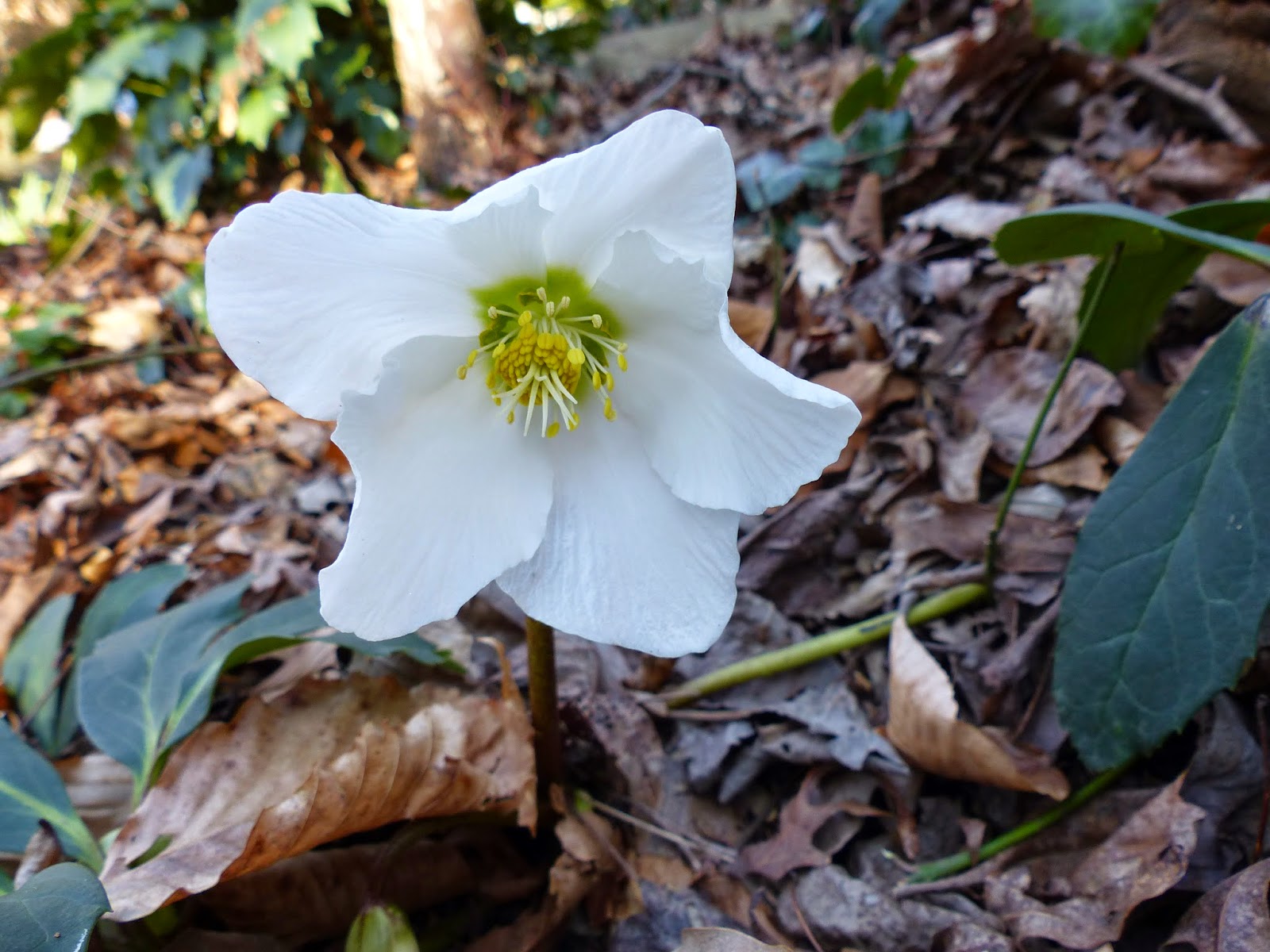 I have been fighting the notion now for 42 years, but the facts are there.   I am not going to have a sun-drenched garden.   I live in the middle of the woods.

Wendie Britt recently gave me a wonderful present - a booklet, which is an excerpt from Elizabeth Lawrence's The Little Bulbs made into a work all its own.  It's called Lob's Wood.

It's about a Mr. Krippendorf from Cincinnati, Ohio, who corresponded with the great garden writer Elizabeth Lawrence.  She wrote about him for ten years, as long as the reports from his woodland garden came to her through the mail.

In the chapter entitled, "The Year Begins", Miss Lawrence writes:  "In a woodland garden the year begins and ends with keeping the woods clear.  This means hard physical labor, and that is what Mr. Krippendorf liked.  He liked chopping down trees and cleaning up dead branches, and cutting out undergrowth."

For years, I've thought about creating a woodland garden.  I vowed every winter to pick up all the dead branches, to clear out brush and create a wide pathway that leads to a stone cistern dating from the late 19th Century.  I watched for several years the growth of two ironwood trees along my driveway.  They stood as a natural entrance to the above imagined path.  As soon as they got up where the lower branches were over my head, I intended to join them together, sort of pleach them, to make a proper entrance to this secret garden.

Now, the lowest tree branches are way above my head,   I have long missed this opportunity, but the two trees would still make a nice entrance to this fantasy garden in my mind.

But, here's the problem.  Although I own an ax, I am terrified of it, and swinging one is just beyond my physical ability.  I would never try a chain saw, as I would certainly lose a limb of my own.  I used to have a saw I loved, a sort of stubby one, but I broke it and never replaced it.  And then, a giant tree fell, with no way to move it or chop it up.  The good thing about the passage of time in the latter case, is that I can now dig out the decayed wood from the thick trunk and spread it over the forest floor.  There's even a chance that its hard remains could be dealt with rather easily.

Mr. Krippendorf kept his woods clean; he cut down smaller trees that were never destined to be magnificent and ended up with a forest with enough light to grow thousands upon thousands of bulbs.

He wrote to Elizabeth Lawrence:  "Along one of the woodland paths the ground is white with Christmas rose (Helleborus niger); some of the Byzantine snowdrops are in bloom, and there are buds on the Lenten roses."

Look at my bloom above.  It is a Christmas rose and has emerged from a plant given to me years ago by the late Jitsuko Johnson.  In 2006, half the plant was dug (another story; I thought I was going to sell my house, and I let a lady and her son have a lot of plants), and it took eight years for it to produce another flower (last February).  This year there were three flowers.  I cut the one you see above and brought it into the house.  Usually, the blossoms of this particular hellebore last a long time as a cut flower.  This one wilted immediately, sort of like the Lenten roses do.

Then, last week, when the temp went down to 12 degrees at my house, I cut another half-open bloom the night before, because it was too far up to cover, and I didn't think it could withstand the cold.

So now there is one more hidden bud, and I have made a tent for it.  It's supposed to snow tomorrow, and I want this one to have a chance.  That second bloom is holding up inside, but did not open.

What is the fuss over three flowers?  First, the plant was given to me by a very beautiful person and a generous, wonderful gardener who died too soon.  Second, I want what Mr. Krippendorf had - a ground white with Christmas roses.  It's taken me decades to realize that I will never have a garden filled with sun-loving flowers.  But, couldn't I get the pleasure Mr. K. got, at least for a couple of months in the early spring?

While ago, I went to check on my tent situation.  It will hold up, I think.  But, I need dozens and dozens of Helleborus niger. (the species and all the new hybrids, too).   I need snowflakes (I have tons I could transplant from the little house).  I want thousands of daffodils,  scillas,  crocuses, bloodroot (there is one plant near the cistern; it has endured valiantly for decades), winter aconites and on and on.

But first, I need to get out there and get serious.  There are dead branches all over the place.  And, another big branch (or was it a mid-size tree?) has fallen into the area I intend to clean up.  This latter fact is discouraging, but not nearly as disheartening as the realization of what I really need:  a Mr. Krippendorf.  And, unless some miracle happens,  I'm not thinking one of his ilk is going to come down my driveway anytime soon.