Obsessed with arches and what lies beyond 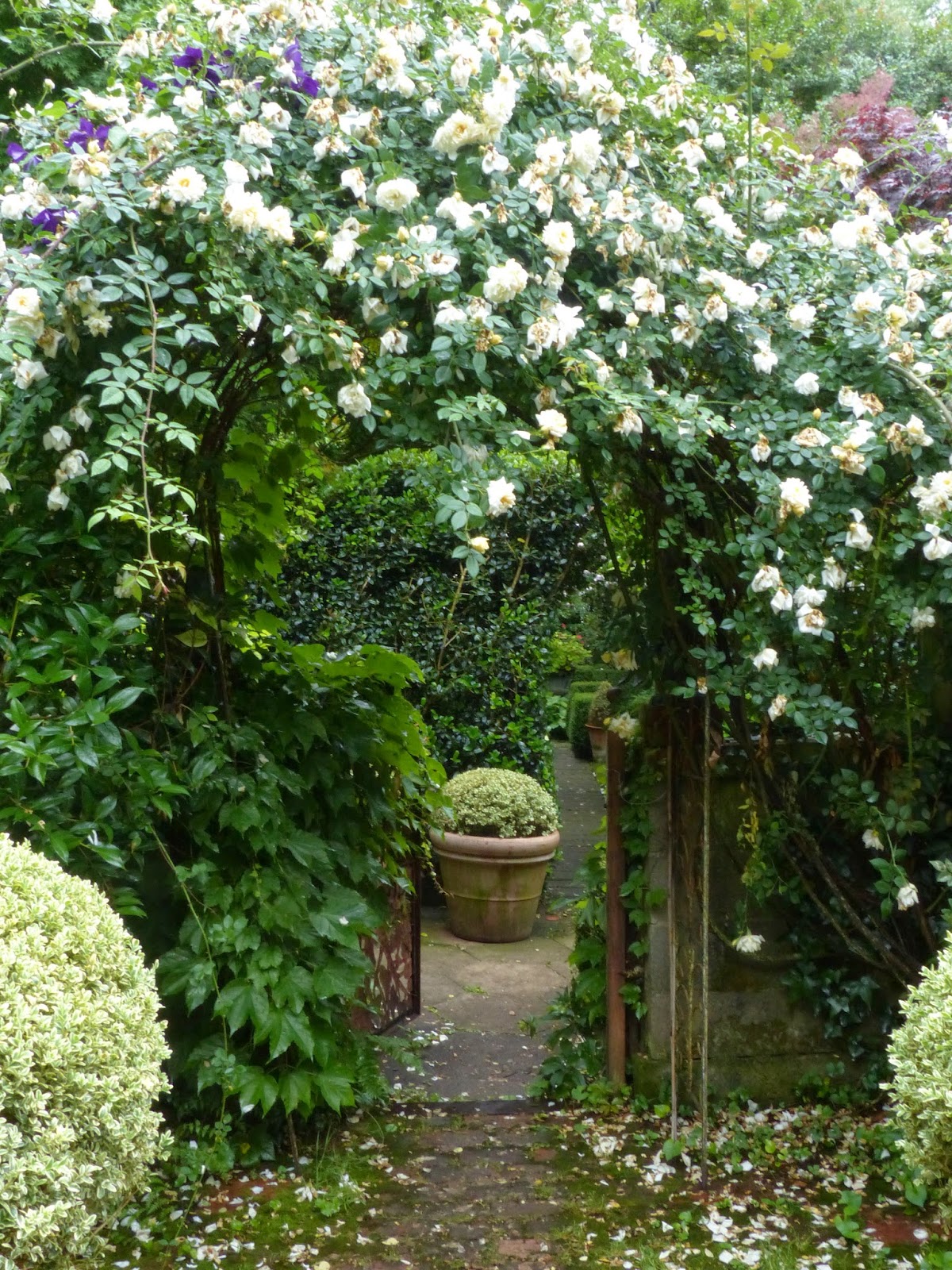 On Saturday, I sort of got the wind taken out my sails about shearing the English boxwoods.  Someone who does that for a living and keeps at least two fabulous gardens, both with brimming with all sorts of boxwoods, told me my idea of shearing the row in the garden beneath my kitchen window is a bad one.

He showed me the same method that my mother-in-law and my own mother always used, that is, you clip down into the shrub for that type of boxwood.  The result would leave me with a lot of woody stubs and no green.

So, he came up with another solution.  When he pointed out that some of the boxwoods were not filled in on the bottom (understatement), I could see that any kind of pruning/shearing was going to make it unsightly for a long time.

Instead of trying to make these particular boxwoods into something they cannot be, he suggested replacing them with Korean boxwoods he has grown at the farm.  They can be sheared and will make an instant hedge, and I'll have the look I want.

But what to do with all these boxwoods that we take out?  He suggested planting them where they will be able to be shaped and kept in a more natural form, as they were meant to be.

I was okay with this plan, and then we walked around to the back where I showed him the 20 fastigiate boxwoods I bought from Elizabeth Dean.  The idea was that in the fall when I went to pick them up, I would get them into the ground immediately.  They were pot bound, she said, and needed to be freed.

Well, I couldn't figure out where to plant them, so I didn't.  When the temperature dropped into the low teens in December, I put them under the concrete deck to protect them, just in case.  There, they remain.

However, the boxwood expert had a great idea.  I had envisioned a long allee - ten boxwoods on each side.  The fact is, though,  that I have already used all the level ground that would work for such a formation.

So, in the new (2013) lower garden, he suggested taking out a row of raggedy hemlocks which also have no growth on the bottoms and thin, scraggly branches on the tops.  There's no way they will ever look good.   They stand at the end of a large rectangle which is bordered by cobblestones and filled with tiny pea gravel.  The two sides are fine, with boxwoods covering up the base of healthier hemlocks, which form a tall hedge.

The upright boxwoods can be planted at the end.  And, he can take out a thin, rusty arch leading up from this garden space to a terrace and make a living arch with four of the fastigiate boxwoods.  In other words, he would plant the boxwoods and then train them to grow together at the top.

I'll also gain an arch of these boxwoods at the other end where the doomed hemlocks are.  That would give me something to concentrate on, although it is fairly shady beyond the proposed portal.  Some of those boxwoods we'll remove from the arch garden could actually grow there, perhaps marking a path that would lead to an untamed area that could be gentrified with some hellebores and scilla and maybe a rock edging.  A visitor would look through and find a new part of the garden, one I hadn't even thought  of before another pair of eyes assessed the situation and opened up a lot of new possibilities.

Photograph above:  Arches abound in Ryan Gainey's garden in Decatur, Georgia.  I love looking through to see what's on the other side.