The high cost of beech leaves 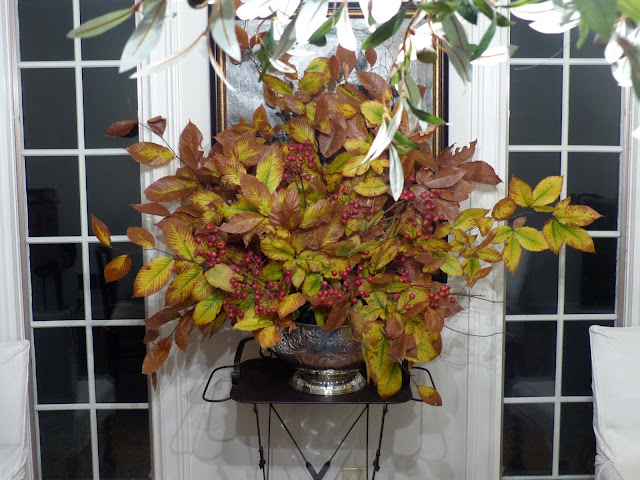 My foraging from roadsides has caused me some problems as of late.

The Sunday before Thanksgiving a friend from church wanted some bittersweet to take to her second home in Florida for decorations.  "No problem," I said.  "I know where we can get some."

She showed up at my house in her Sunday clothes - heels, hose, beautiful silky cape that I knew would unravel if it ever made contact with a thorn.

So, I relegated her to the getaway car.  We parked on a street off the main road where the wild vine grows.  I had already raided the safest spot for decorations for the Flower Guild luncheon in early November.  This time, I would have to negotiate a much steeper bank on a curve.

I didn't realize how much of a speedway this nearby road was.  I couldn't climb the bank at such an angle, but I could easily reach a lot of the vine, which by now had popped open to reveal the red seeds inside.  I leaned into the bank and the various thorns and cut a good armload before I had to return to where my friend was standing with the car.  I was a mess of leaves, and all sorts of sticks were clinging to my fleece top.

I went back for a second round, and then, to my horror, my friend crossed over and was standing too close to the road.  "Let me help you," she offered, not realizing that she was about to lose her life over a few strands of bittersweet.  After a couple of cars almost nipped her, she retreated and let me finish.

But that was then.  Fast forward to Thanksgiving Day.

Some friends were to come over around one, and I had gotten everything done.  It was about 11:15.

I love taking beech leaves and making an arrangement with red rose hips.  I buy the latter each year from the wholesale florist.  The problem is that beech leaves (I have many of the trees on my property) turn brown before Thanksgiving, all except this one tree about a mile down the road from my house.  For some reason, it retains the mix of green, gold and bronze longer than any of the other trees in my neighborhood.  The only thing is the branches have to picked and used immediately.  By the next day, they will have turned completely brown.

So, with the table all set, I headed for the tree.  I passed it, and as I looked to my left before I turned around in a school entrance, I spied some bittersweet.  My heart started beating fast.  I wanted that bittersweet, too.  But first I would get the beech leaves.

I pulled up onto a slight bank off the road and put my hazard lights on.  I opened my trunk and got out my loppers and headed to the tree and started cutting.  I tried not to be too greedy, but I needed enough to make the arrangement and a couple of extra branches to put in back of my silver service.

All was fine.  I stashed the beech leaves in the trunk and got back in my car.  I still had time to get the bittersweet.

I reached over and felt for my keys in the passenger seat.  They weren't there.  I have a rule that when I stop like this, I put my keys on the windshield.  But, in the excitement of the bittersweet sighting, I hadn't bothered to do that.  Maybe in my pocketbook.  I dumped it upside down.  No key.  I reached beside both seats.  Nothing had fallen down.  I opened the door and looked down.  Nothing but piles of water oak leaves.  No key.

I had left my phone charging at home, so I couldn't call anyone.  I kicked leaves around in a panic and found nothing.

Finally, I started walking toward home.  Immediately a young couple with a cat and dog in the car asked if I needed a ride.  I had my dog in my car, but I couldn't let the windows down, and I didn't have a leash with me.  He had to stay.  The couple dropped me off at the top of my (very long) driveway, and I ran at top speed to the house (I was, by now, wet to the bone) to call my guests and tell them to delay coming.  I explained what I had done.  They insisted on coming to get me and taking me to my car, which was really out of the way for them, but I accepted.

So, the end is this.  I got my valet key (the only key I have left) and started walking.  My friends picked me up at the corner and took me back to the car.  They helped me look on the ground, but no sign of any key.  They asked if I had disturbed the leaves, and of course, I had kicked them every which way in my initial panic.  "Oh, it would have been on top.  You never should have disturbed the leaves."

I've made four trips, the last with a rake, to look for my key.  I've had no luck.  I called several dealers today, and the best price for replacement is $120.

So, that arrangement you see above (which was thrown together at record speed) turned out to be very costly.  I'm still hitting myself over the head for not sticking to my windshield rule, which I made several years ago after making some friends look for an hour for my keys, which were stuck in the lock of my open trunk.  Not one time have I ever veered from this windshield policy since.  Except on Thursday.

Despite everything, we were able to have our meal around two o'clock.  It was a lot of fun, and the food (most of which they brought) was delicious.  I don't know if they were being kind or not, but my friends raved over the beech leaves and said they made everything seem so "Thanksgiving-y."  I certainly hope so, because that one bunch of leaves cost twice what I spend on my Christmas tree.  Oh well, perhaps it was apt punishment for cutting on someone else's tree, which was actually on the right-of-way, or at least that is my take on the location, and I'll stick with that story. 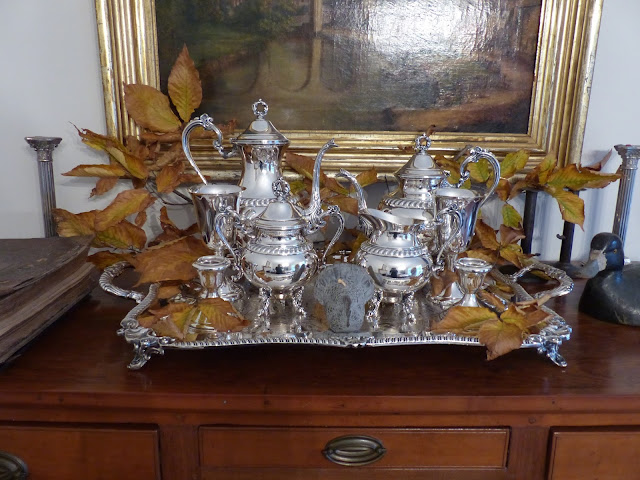 Beech leaves turn brown after they've been cut for several hours.  This was taken the next day. 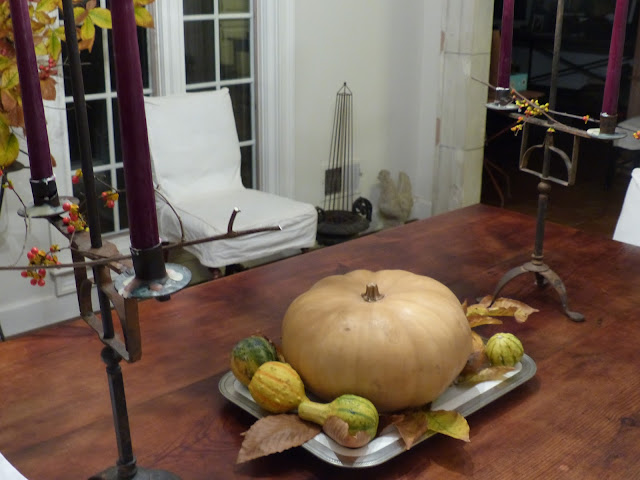 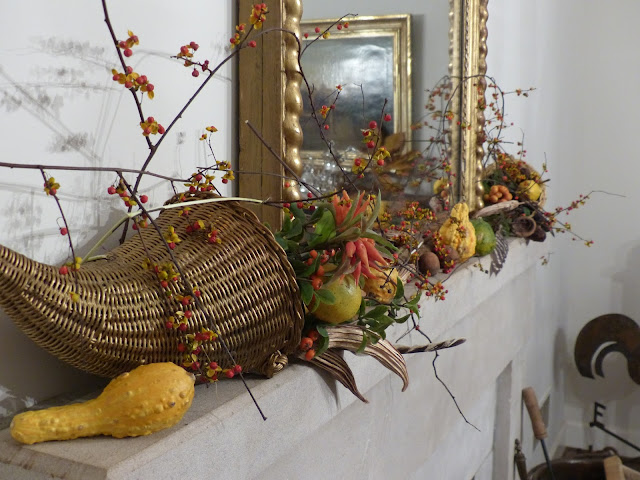 Roadside bittersweet obtained with great danger flung on the mantle and on iron candlesticks (photo above).