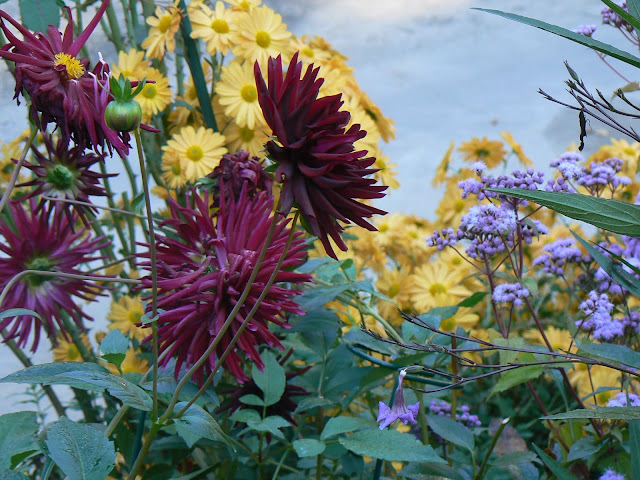 My daddy's mother lived in a cottage just down from our house when I was growing up.  Daddy and Mother had brought her from the country to our small town, and for me, it was great to have her so close.  I could escape and go down there anytime I chose.

In the spring and summer, you would see her out in the giant vegetable garden my parents kept.  She wore gingham bonnets - all of which she made herself - and would be wielding a hoe, chopping up weeds.

She was also a flower gardener.  Most of what she grew, she planted in rows, as if they were vegetables.

Her cottage was dark red brick, and in late summer, a row of dark red dahlias would come up along the base of the house.  I loved picking them for bouquets, and she gave me free rein to do anything I wished.

I snapped this photograph in Diana Mendes' wonderful fall garden in Atlanta.  It's packed with chrysanthemums, fall-blooming roses, Mexican sage, asters and about anything else that flowers until frost,

My grandmother's dahlias weren't the cactus type shown above, but they were the same color.  The instant I saw them, I was taken back to that place in my childhood when a feisty, loving grandmother let me have the run of the place.

She was born on February 14, 1875, and died on February 14, 1961.  Although that is so far removed from this time and place in my life, I still grow sentimental when I think of her love for gardening and that row of dahlias I could count on year after year.
Posted by Martha Smith Tate at 10:00 AM