Hydrangeas make the scene in The Hamptons 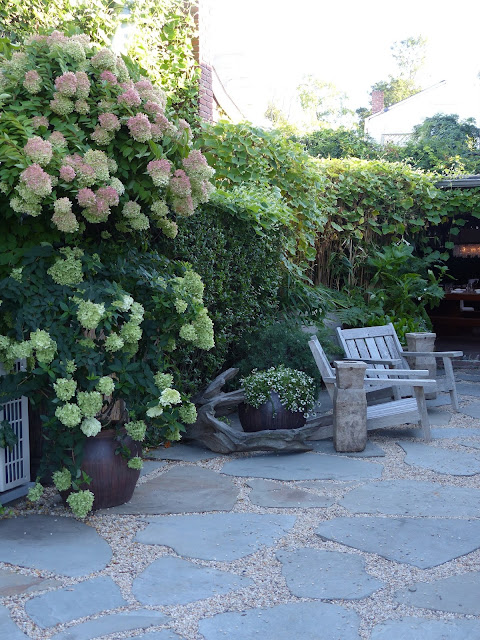 The other day I read a description of habitual procrastinators and why they do what they do.  It was if someone were doing a case study on me.  One of the things that jumped out at me was that people who perennially put off things will decide, "Okay. I'm getting this task done today, without fail!"

But, what happens next?  They get close to starting whatever they've put off, but will inevitably find something else to do instead.  "Let me just get this load of laundry in, or, I need to brush the dog first, and then I'll start writing."  That's usually the case for me, or lately it was completing my taxes, which are due October 15 (because I didn't get them done by April 15th).  I dragged this process out over two months, making my kitchen table inaccessible for having a meal in my usual spot.

And this blog.  I love to write about gardens.  I love to pick out the pictures.  But, it takes me a long time to write, a sizable block of time, in fact.  So, with the taxes looming over me and my blog neglected for weeks, what did I do?  I started practicing the piano, saying, "It's good for my mind, and playing will calm me down so I can concentrate and write."  But then, I didn't.

One more excuse/apology.  A couple of weeks ago, a situation came up at church where I had to pick out thousands of dollars worth of plants and organize them into a garden setting for a new building that will soon be complete.  This was a year-long planning job that had to be done in a week's time (not my procrastination; it came up at the last minute and had to be decided on immediately).  I still have some outstanding work - mostly bids - to obtain, and it has to be finished this week.

Now, to the above photograph.  I took this in Sag Harbor, New York, over Labor Day weekend.  I went to Long Island with my daughter and son-in-law and one-year-old granddaughter.  We stayed in a 19th century cottage with a beamed ceiling and floorboards that were at least a foot wide.  It was chock full of good books, and there was an apple tree full of ripening fruit in the back garden.  There was a lovely Hydrangea paniculata by the back door.  The deer have eaten all of mine, but for some reason they hadn't touched this magnificent plant, nor the billowing H. macrophylla in front.  They had, however, pretty much chewed up the ones up by the street.  I know they were in the garden, because my son-in-law saw them leisurely checking out the apples one morning.

We were able to walk the few blocks to town in just a couple of minutes.  But, the day I took this photograph, I decided to explore more residential streets (it was a whaling village originally) on my own.  When my son-in-law asked if I wanted a map, I assured him that I had an excellent sense of direction and could find my way around the town and back.

Three hours later, I was glad to see the harbor after zig-zagging back and forth, totally lost.  It was opposite the bay that I saw this restaurant that looked so inviting.  As I took the photograph of the hydrangeas and patio, I heard the hostess say that they were completely booked and could not even accommodate a table for two.  I was crestfallen, because the place was so charming and I was so hungry.  I think we ended up with some pizza slices that night, but I was glad just to get home after my three-hour walkabout.

One day, we drove to East Hampton and were riding through the maze of narrow gravel lanes lined with tall privet (!) hedges, where the estates border the ocean.  All of a sudden I saw three women walking, and one turned around to look at us.  It was Gayle King, whom I watch every day on CBS This Morning.  Then, I realized that the shorter woman with the big hair was Oprah.  My son-in-law drove slowly, and my daughter and I tried not to look like gawkers.  There was no one else around, just the five of us (I didn't recognize their friend).  It was weird, being such a voyeur.  I'm not good at identifying celebrities (Jay-Z walked right by me at the harbor, but I didn't recognize him), but it did give me a thrill to see Oprah and Gayle (who were hoping for privacy, I'm sure).

It was also fun trying to get a glimpse of what looked like elegant arboretums planted behind the high hedges.  The landscapes were beautiful, and I loved what is left of the countryside and farms. I'm such a fan of hedges, so this was like paradise for me.  Everyone had them.

I hope I can do this blog without writing so much.  People want to see flowers and gardens, not read the ramblings of an excuse-maker.  I have way too many photographs not to share them, and they really don't need all this commentary.  Let's see, a picture is worth a thousand words, right?  I need to respect that adage.  I hope to do better in the future.