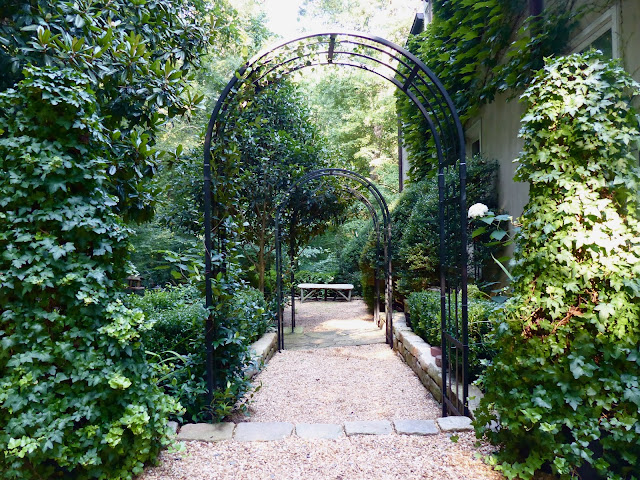 A one-day break today in a long stream of days in the mid-90's in Atlanta.  It's been like this for a month.  My air-conditioning bill was bad for June; I can't imagine what it's going to be like for the month of July.  I'll know in a couple of weeks.

What you see above is my almost two-year-old "arch" garden on a hot, dry summer day.  It looks nothing like I'd envisioned.  The first of the three arches should have been smothered in re-blooming roses by now.  You can barely make out the few spindly canes near the bottom right side of the arbor.  Actually, I don't think you can see them at all.

On the left is Confederate jasmine.  My neighbor gave me the plants after they didn't work out for her.  They are not 'Madison', which is hardier here in Atlanta.  And, since the plants (there's one on the second arch, as well) are on the east side of the house, the winter sun hits them in early morning. If there's a hard freeze, they get zapped and turn brown.  About mid-summer, they recover, but not enough to cover the arbor.

In the foreground are two ivy topiaries I rescued after using them at church for two Christmases in a row.  This was back in 2000 and 2001.  It took a long time to get them lush and green again.  They flank the entrance from the driveway to the garden.

That's Boston ivy (Parthenocissus tricuspidata) up high on the side of the house.  The tall, clipped shrubs against the wall are Japanese hollies.  I used to know the selection - they grow in a cone shape.  I've had them for at least 25 years.  Between them are chest-high American boxwoods.  Opposite them, a row of English boxwoods forms a shaggy, knee-high hedge.

Just out of sight along the little cobblestone walls are low Korean boxwood hedges, sheared into a long line.  On the left, there is an additional row of the same boxwoods atop another low cobblestone where an ivy topiary - shaped like a globe - anchors the corner.  The "tree" you see to the left of the third arch is an orange tea olive.  I haven't had the heart to cut the top out to force side branches cover the arch, which was my original intention.

I'm giving you this tedious list to say that the colorful, blousy garden I'd had in my mind is not to be.  My calculation of how much sun I would have in spring and summer was way off.  Only at the end - where you see the concrete bench - do I have a spot of sun.  I have an out-of-control-because-it-has-no-support 'Graham Stuart Thomas' yellow English rose.   I plopped it there in the worst clay, but I have promised it that there will be loads of mulch from the compost pile soon to come to cool the roots.  Also, I'll be vigilant about feeding.  Still, it has given me some of those odd-colored, but beautiful dusky yellow roses.  They will also have an arbor to climb, but I haven't decided the size yet.

All this to tell you that I only have a green garden right now.  That one white bloom is a late-occurring 'Annabelle' hydrangea.  So far, it's protected from the deer, although I'm disheartened by the four giant bucks I see every morning.  A worker who came to my house when I wasn't here, found them walking leisurely through the arches.

I've been around long enough to realize that there are ways to introduce color to this mostly shady garden area.  I will be looking for a sasanqua espalier to go against the near wall where I had thought roses would climb.  I also rooted some Hydrangea macrophylla plants that have enormous pink blooms to fill in the empty space on the right.  They are coming along nicely a year after I snipped a few cuttings (with permission) from the Piedmont Driving Club.  And, if all goes well, in a couple of months, I'll have some lavender-colored Aster tataricus (rescued from the opposite side of the house where I have a bit of sun but no protection from the deer) blooming right behind the ivy topiaries.

But for the time being, I must tell myself that it is okay not to have a riot of yellows, reds, pinks and blues like I wanted.  After all, green is a color, and it happens to be my favorite - very soothing in this heat.  At least that's how I'm rationalizing everything right now.  I don't know how long this attitude will last.