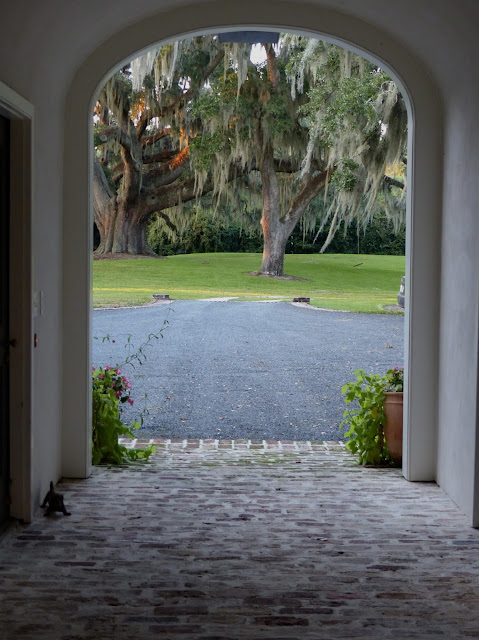 Before we entered the iron gates attached to fig-vine-covered stone pillars, my jealousy meter started going off.  At first, I thought this stucco house, new but perfectly constructed to harken back to another time and another place, was the only house inside a fence where placid cattle and a few donkeys grazed lazily.  Then, I realized that the house in view, the one we were visiting, just happened to have enough land to suggest an estate.  It was actually situated in a sort of gated community, two words that usually make my eyes glaze over.  Not this time, however.

We had gone there to watch the sun set over the Intercoastal waterway, near Pawleys Island, South Carolina, where I've vacationed for some 40 years.  I had no idea this dreamy landscape existed only two miles or less from the oceanfront.

Well, the latter statement isn't exactly true.  In May, my younger daughter was married at Pawleys Island (I'm thinking that this destination wedding, with the reception held outdoors at a rustic old inn on the ocean, took several years off my life.  However, the awful, rainy weather predicted on Sunday before that Saturday, turned into a cool, perfect evening with no humidity and only the slightest ruffle of a breeze; still, the damage had been done).

But, about the beautiful scenery nearby.  The rehearsal dinner given by her future in-laws was held at a former rice plantation, now with a golf course and beautiful grounds.  This magical place, entered by a curving allee lined with ancient live oaks hung with Spanish moss, was just down the waterway from the house pictured above.  The view to the west was much the same, looking out over marshland to the water beyond.  We were all mystified that we never knew this stunningly beautiful place existed.

Back to the recent August evening.  Our host helped design the house.  One of the reasons the two-story, white stucco house looked like it had been there forever (it helped that the exterior walls were already streaked by weather) was the setting among huge live oaks that had been there for centuries.

The drive-through you see above (you're looking out at the side lawn, which carries around to the front of the house and slopes very gently to the pastures beyond) is paved with bricks found on the site and leads to the back of the house where a hexagonal outbuilding is covered with fig vine.  This charming, slate-roofed structure overlooks a parterre planted with herbs and cutting flowers.  Beyond is the waterway visible above more lawns and through live oaks hung with gray moss.

I won't even go into the magazine-perfect interiors.  The rooms, either with heart pine or ancient brick floors, were so wonderfully appointed that my heart fluttered with envy (I know that breaks the Ten Commandments; I was ashamed of the way I felt).

We watched the sunset from a screened porch that ran all along the back of the house.  More live oaks, a swing with a wide arc hanging from a high branch,  lovely shade plants at the base of the porch, a view of the distant water.

Actually, when I think about it, there really weren't many "gardens",  but more of a dreamy setting so beautifully preserved and honored by the owners.  This was a case of "less is more", although keeping all those sweeping lawns mown and cleaned of limbs could hardly be called low-maintenace.  It was indeed a treat to see.  As the sun set over the water and the stars began to twinkle high above,  I felt more grateful than envious - but not much.