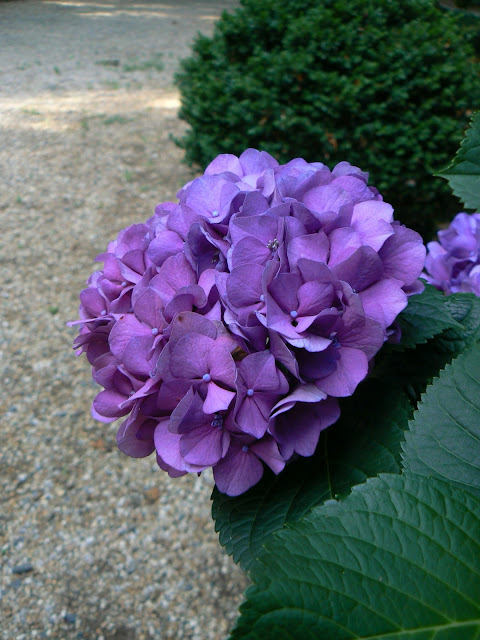 Sometime long ago, maybe 40 years or so, my mother planted a potted hydrangea (probably one someone had given her) at the back corner of her house.  It couldn't have been a worse location for a macrophylla.  The site had both a southern and western exposure, and the shrub received the reflection off a white brick wall.  The full afternoon sun and heated glare were brutal.

Yet, the hydrangea thrived, and every year it produced the deepest purple blooms.  And that brings me to the title above.  My husband, Chip Tate, died suddenly on this date - June 17 - sixteen years ago, in 1999.  Sometimes it seems so far away, and other times it's like it happened yesterday.

At any rate, his favorite color was purple, and he always admired Mother's purple hydrangeas.  She would often cut flowers for him when he was down there.

Two or three years after he died, I went up to the family cemetery in Tate, Georgia, and took a bouquet tied with a purple ribbon.  The flowers were the darkest ones I'd ever seen on the shrub.  He would have loved them.

Fast forward to the winter of 2011.  I came home one day to find an enormous black plastic pot in front of the chimney of my house.  A bunch of sticks were coming out of the container, and I was puzzled.  What on earth was this?

A couple of weeks passed, and finally the man who maintains my late parents' property came by and told me he had dug Mother's hydrangea for me.  The roots had gone down very deep, he said, so that's why he needed such a large container.

Above, you can see that when it bloomed that first June, the flowers were a grape color.  The plant was still in the container, which weighed a ton.  But, I couldn't think of a place for the hydrangea, so I just left it as it was.  The next year, lots of blooms came on, but they had turned Pepto-Bismol pink.  I knew I had to make a decision to get the plant in the ground.

Finally, in 2014, I was able to add a new little section to the side garden, so that's where the hydrangea landed, after spending the previous cold winter in a protected place.  Its first year in the ground the blooms were enormous and a darker, rose-pink - but still pink.  Hydrangea expert and nurserywoman Elizabeth Dean saw pictures and thought it was H. macrophylla 'Merritt's Supreme'.  She was encouraging, saying that it would likely continue to deepen in color in the ground.

When the plant was at Mother's, the branches were so brittle and upright that I could not find a way to layer it.  But here, I was able to put down some stems, and now I have three new plants.  The mother plant did not produce a single blossom this year.  But one of the babies has a flower, and I can see that it is headed in the purple direction.

I sort of doubt that I will ever achieve that dark, dark color that would glow in the sun at Mother's.  The plant is in much more shade now.  I'm not sure if that will make a difference.

Still, if I could achieve the color shown above, I'd be very happy.

I'm not going to the cemetery today - it's way too hot.  But, I can look out the window from where I'm sitting and see the one bloom on the new little plant.  Perhaps next year there won't be a late winter freeze, and I'll have plenty of flowers to take to Chip.  I'm pretty sure he would like this color, too, since it is still purple.

There's just something special about hydrangeas - no matter what the color - that conjures up so many happy memories.  I'm so glad the man from the farm went to the trouble to surprise me with this cherished plant.  It was such a nice thing to do.