The year of the foxgloves 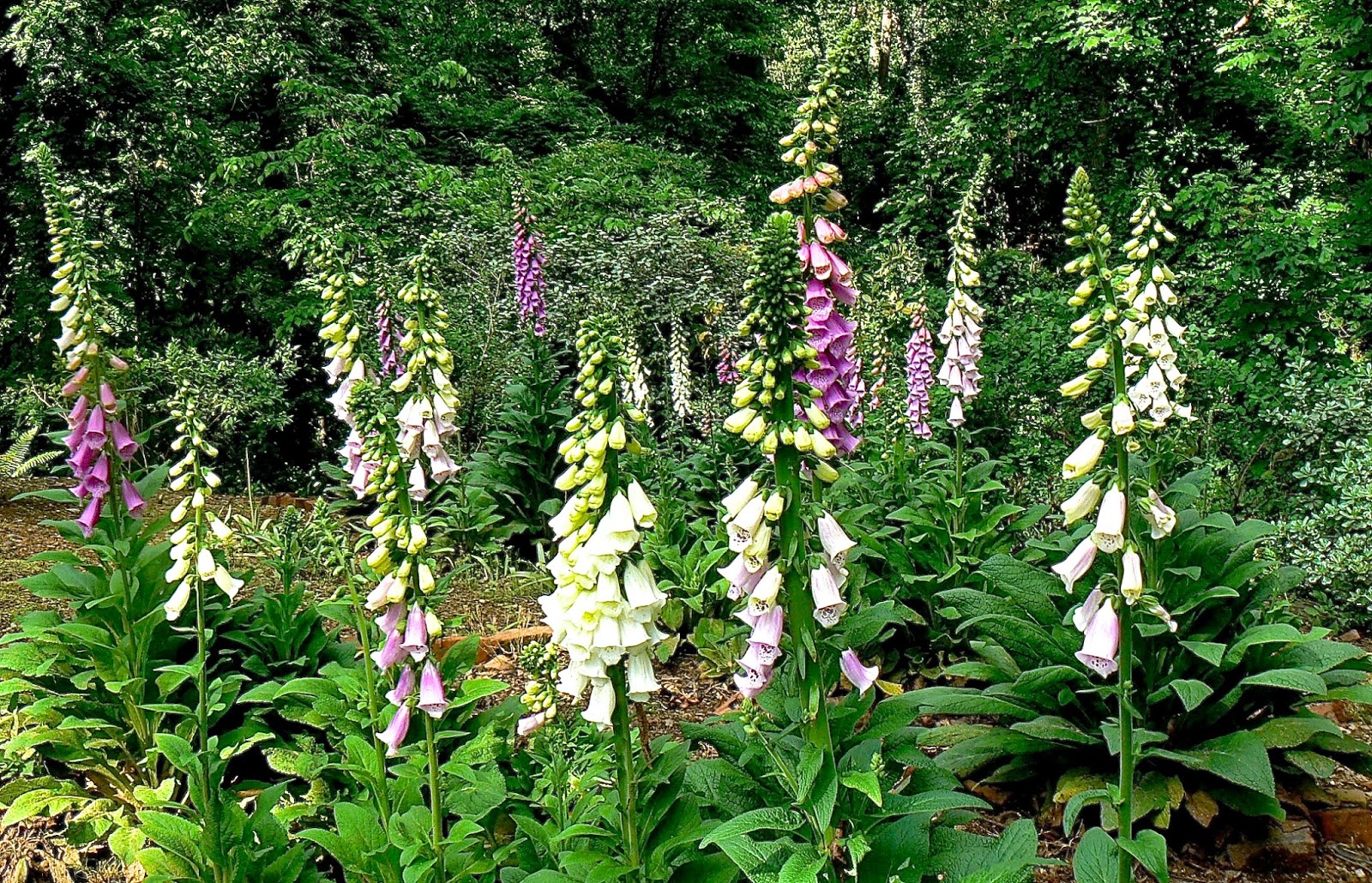 Have you ever had a weird phenomenon occur in your garden and could never quite figure out what happened?

There's no way to know if an event in June 2011 had anything to do with an explosion of flowers the next April, but I can't think of any other explanation.

On the 18th of June 2011, I was driving back from the farm when I saw an ominous-looking cloud in the distance.  When I got within two miles of my house in Atlanta,  a huge oak tree had crashed on top of a building.  I didn't see any signs that it had rained, so I wasn't really sure what had happened when.

However, by the time I reached my house in a very wooded neighborhood, I was dodging fallen branches, and the usual storm debris consisting of small limbs and twigs were scattered along my driveway.  I decided to walk up to the little house and make sure no big limbs were down to block the way.

I had not even reached the parking lot when I looked to my left.  I couldn't believe it.'  A giant ancient oak had uprooted and fallen across a dip in the land and hit another two trees on top of a hill and knocked them down.

My heart sank.  I already had a lot of big tree damage from a month before when a mini-tornado twisted the tops of huge trees and hurled them down into the woods below.  And now this.

After this initial shock, I rounded the corner to the parking lot of the little house.  What on earth?  Where was the house?  I could only see green leaves and limbs.  No cottage. The leaves were way over into the  yard, covering some boxwoods and my patch of hellebores.  Where was the side of the house, the back deck?  The entire dark green cottage was obscured from view.  Wires lay in the parking lot.  It was hard to figure out what had happened.

It didn't take long for me to realize, though,  that a huge oak tree (large double trunks) had blown over from my neighbor's property and crushed the house.  I won't go into the details about the destruction of a house built in 1929, but suffice it to say I was pretty numb.  Part of the brick wall that surrounded the front courtyard was now a pile of rubble.  The entire house was obscured, even the front porch, but I could tell the tree had come from back down the hill.

Long story short, it took several months to repair the damage, as half the house was basically destroyed, along with the chimney.  I had a maddening moment with the neighbor in back, who claimed it was my tree that fell.  It wasn't, I learned, after I paid for a $1,000 survey to dispute the GPS on her cell phone, which she had used to make the claim.  It didn't matter, really, because it was my insurance and deductible that would have to pay.  But, she wanted me to take down several trees that had been damaged during the fall.  These were all on her property, as well.  My insurance company would only allow the trunks to be sawed to the property line.  The enormous remains are still there.

But, this is not really about this horror story.  It's about what happened when all the debris had been cleared from the ground.

All of a sudden, I started noticing little foxglove plants springing up everywhere.  I'd had a couple of plants bloom earlier in May, seeded from years past.  But, now there were dozens of seedlings popping up, not only where the tree branches had reached, but way over on the other side of a hill that hadn't been touched.

I watched them as they grew all summer.  The rosettes became larger, and I knew there would be a lot of foxgloves blooming the next spring.  I even thinned a lot of them out and re-planted them up here.

So, the next spring, beginning in April, I had foxgloves everywhere.  It was crazy.  They were pretty sturdy plants and came in different colors.  I let them bloom out and then saved the seed, which I scattered all over the yard up there.  I removed the old, spent plants.

But, that was the end of that.  The next year, there were few flowers.  This spring, there is one plant in bloom at the little house, and one plant struggling to make a show up here.

So, what happened?  Did lightening strike and charge the seeds that had been lying dormant for years?  And why, when I scattered seeds in the summer of 2012, did I not have many plants come up?

I used to think the time to sow foxglove seeds for the next year was in August.  But, I'm going to give it another try this June.  I need to make sure I have a controlled environment where I can water and weed.  I'm lucky the deer don't bother these plants.  In a couple of weeks, I'm going to fix a place up here (as opposed to the little house in back) for a bed of foxgloves.  I could wait to buy plants in the fall, but I want to give this a try first.

Meanwhile, I'm hoping a terrible storm that did a lot of damage is not what it takes to have a lot of foxglove seeds germinate (the straight line winds also made a tall pine tree lean toward the little house; at great expense I had to have it taken down).

I won't ever know the answer to what really happened, but that's the way with gardens.  You sometimes have these wonderful surprises that you can never really explain.  There are other phenomena - like the yellow Japanese calanthe orchid that popped up in the woods in 1998 - that still have me baffled.  And the verbascum that bloomed so charmingly and was never seen again.  I still look for that plant, just in case it makes a comeback.  One never knows.