A camellia dilemma - what would Margaret do? 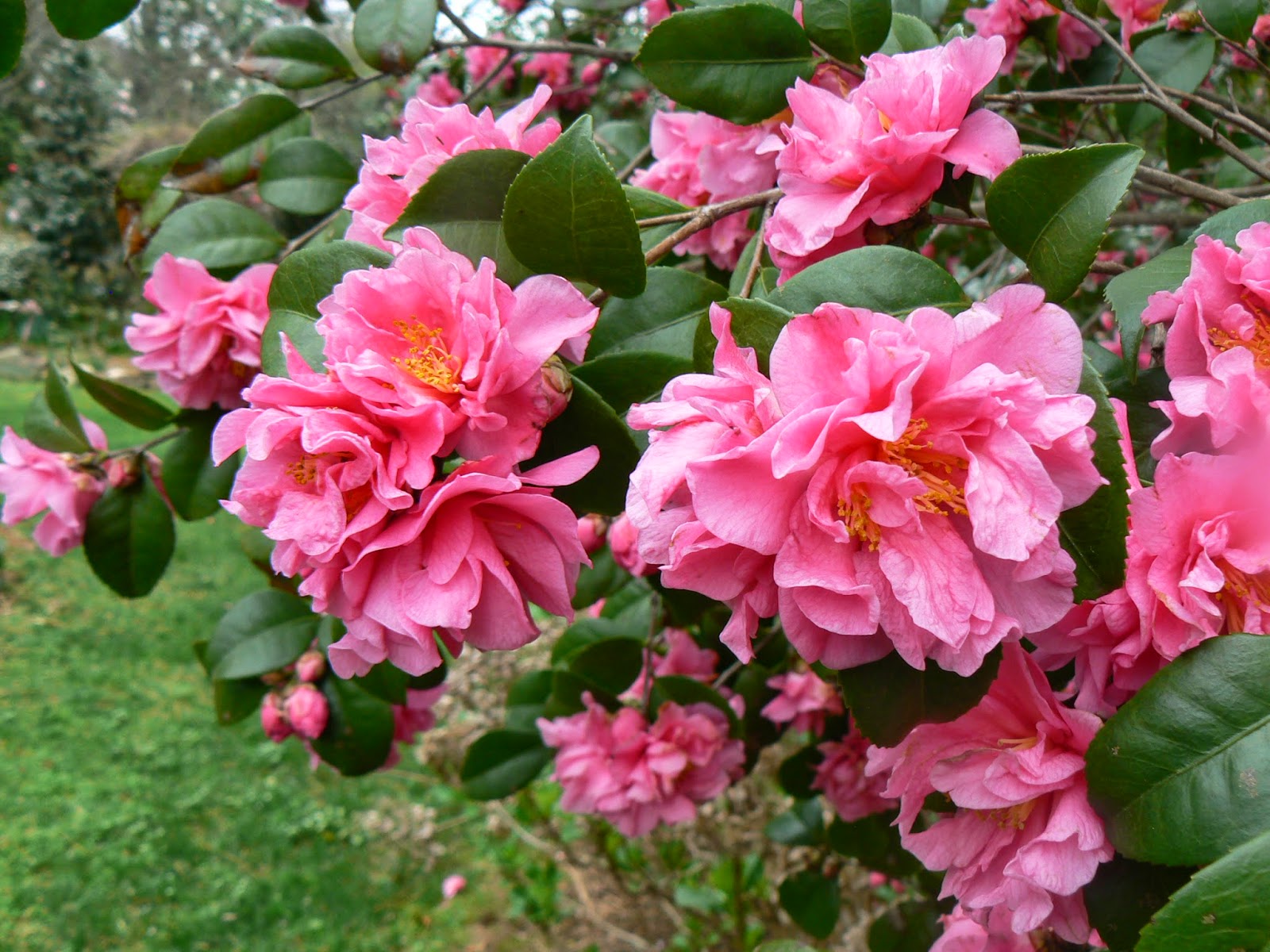 I walked up to the little house yesterday - after not having been up there since before Christmas - to see how many buds there were on my 'Pink Perfection' camellia, which I planted two (or was it three?) years ago.  I had bought several plants - some Camellia japonica and some Camellia sasanqua - to replace some scrub hollies that I had cut down.

I passed the Camellia x 'Taylor's Perfection' which I had planted very close to the driveway. I was pleased to see that it had a good many buds.  It's somewhat misshapen - tall and spindly with a sort of pot belly and then a ball at the top.  It's been there for several years and should be a very tall shrub by now.  By habit, it is not very compact, but this double lollipop is beyond the pale.  I can only think that the soil is not very good there.  I'm pretty sure I fertilized it last spring, although it's been sort of on its own most of the time.

Then, my heart sank.  The two 'Cotton Candy' sasanquas had been partially eaten.  In the fall, they only had a handful of blooms.  Another unnamed Camellia japonica I got as a bonus from Perry Walker's nursery in Jonesboro looked like it had been frozen in time.  It hasn't grown an inch.  But, there was one bud.

The easy-to-grow, "can't miss" 'Pink Perfection', planted either two or three years ago (I'm thinking this is its third season), was sitting there without a single bud.  Plus, had it decided not to grow an inch, too?   At least the deer hadn't sampled it, but still, I was so disappointed and rather ashamed that I, who wrote about other gardens for years, could not grow an old-fashioned camellia that has been in Atlanta gardens for decades.

It only took me only a second to realize what I have to do.  I quote here from my book, Margaret Moseley's A Garden to Remember:

- "Don't ever mind moving a plant.  Normally, I have to move things four or five times to get them in the right place.  I've never thought twice about moving a plant because I knew where it was going and was excited about its new location."
-"Also, I have no patience in waiting.  If I want a plant moved, I do it immediately.  As long as you can water, you should never fear moving a plant.  I don't think I ever lost any plants this way.  It's better to get them in a place where they'll have the right amount of sun or shade."

Margaret, who was in her early nineties when she gave me a list of her hints for a successful garden, would have already had those plants moved.  At age 89, she dug up a six-foot-tall Michelia maudiae and dragged it to a bed at least 50 feet away.  It must be 30 feet tall now and blooms like crazy.

Actually, I've been looking at a cleared-out space up here in front of the house where I thought I could plant some camellias.  But, I had envisioned buying new ones.

I don't have Margaret's confidence.  It's too bad because it is going to rain all day tomorrow.  There's no telling when those plants will get moved.  I have to dig up some English ivy, inspect the soil and haul a ton of compost up the hill before I dare plant anything.  The truth is, even if I had good soil like Margaret's (she admits that has been a huge factor in the success of her garden), I don't think I could get excited over moving plants I thought would be where I put them forever.