Chrysanthemums and a cold November long ago 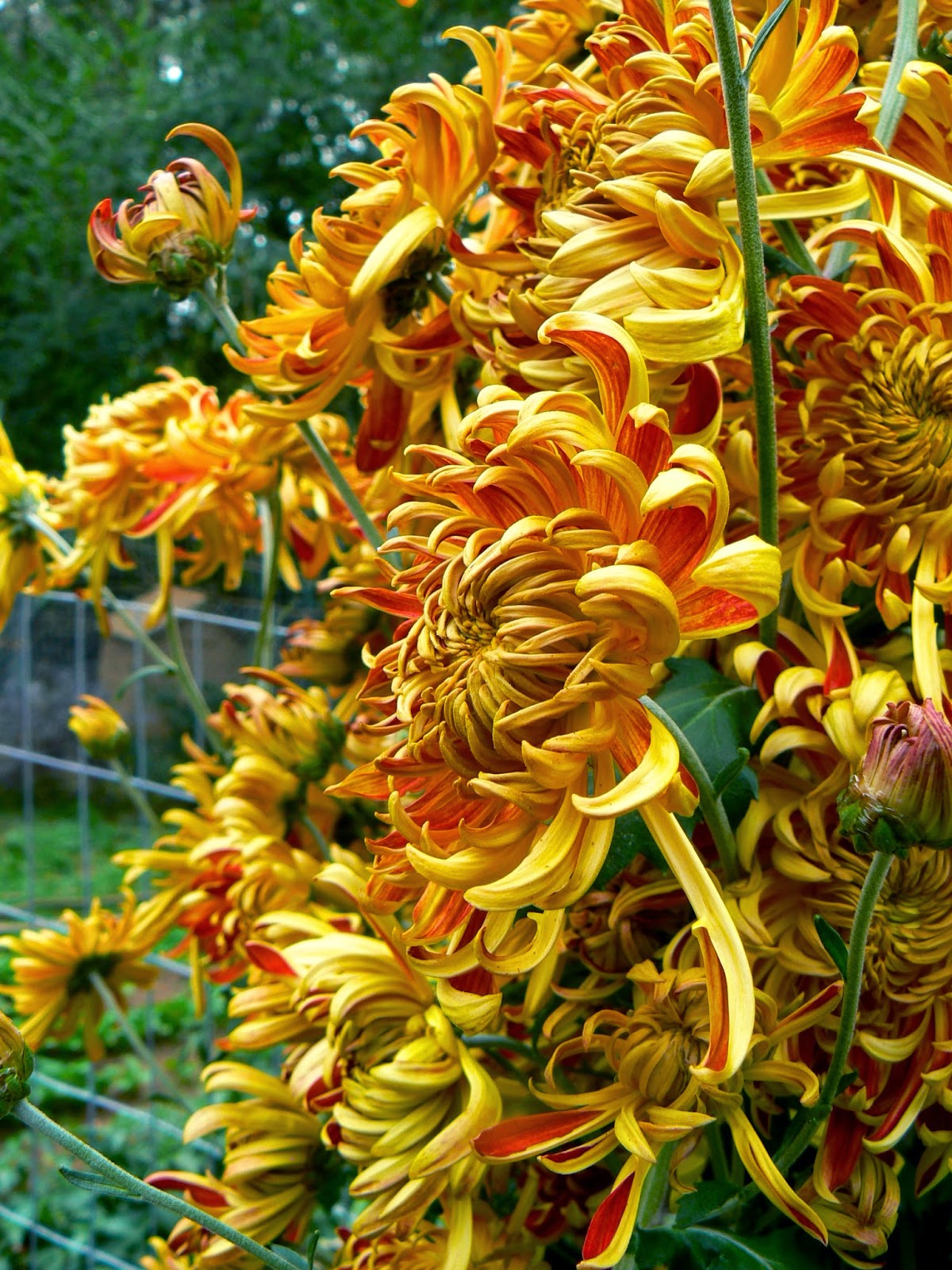 These chrysanthemums look like the ones we would find at a wholesale florist - ones that had come from South America perhaps.  That's where a lot of today's flowers are grown.

But the blooms you see here were growing in a long row near my home town in south Fulton County.  True, the grower is a native of Bulgaria and found the inspiration for growing different chrysanthemums from his grandmother back home.  But, it's a flower I think we can all identify with.

I look at these flowers, and I am reminded of cold nights and high school football games - of arriving at the stadium with my parents and hearing the band already playing and the roar of the crowd.  My heart would beat with anticipation, especially if our team was in contention for a championship.

Actually, though, such flowers were sold on the street outside college games.  Made into corsages with pipe cleaner letters attached, men would buy their dates or wives a big flower to wear.  In those years, we wore suits to college games.  I remember my daddy buying me a football mum as we were walking to a Georgia Tech game.  I had on a tweed suit that had the exact colors you see above.  If I were offered that outfit today, I would reject it.  I look terrible in burnt orange and mustard yellow.

Still, though, the scent of chrysanthemums takes me back to other days and good memories - first of being cold, huddled under a stadium blanket,  and then later arriving home to a hot meal my mother had cooked.

I wanted to add something about today's date.  Who can remember November 18, 1975?  For some reason I do.  I had been married for two years.  The previous May I had ended my five-year teaching career (which had been interrupted by a year off as a ski bum, followed by a year working in Paris).  For the holiday season, I had taken a job in the downtown Rich's silver department.  It was a gleaming area, near an entrance, and my mother had often stopped in there to buy a bride a piece of sterling flatware.

I loved working there, looking at all the patterns.  Once, a friend of mine's father came in.  He was an oilman from Midland, Texas.  He bought all the silver jiggers we had.  They had coins on the bottom and one ridge around the middle.  They were the perfect present for his business acquaintances, he said.

But, I'm rambling now.  My husband's law firm was located a couple of blocks away, so he came by to walk me to the car after work.  Back then, there was a beautiful train station a level below the street near Rich's. I remember saying that it was November 18th, and it should not be so freezing cold.  We were talking about what a handsome building it was, and we were shivering against the cold.  It was already dark, and like this morning, it was unusually frigid with a stiff wind, made worse by being downtown.

It was one of those moments, though, that I felt completely happy.  I had the right husband, the best parents, a tiny cottage in the woods, and life seemed full of possibilities.

I just saw on television a man talking about the happiness curve.  It dips in your forties, and then starts back up in your fifties.  That line did not veer that way for me.  My husband was struck down suddenly just after his 56th birthday.  I had just turned 54, and our girls were 22 and 15, and the years that followed were not good.

But, the TV interview ended on a promising note.  Apparently, you reach the peak of your happiness in your 70's.  I have always been a hopeful person, thinking that something better is always around the next corner.

The old Rich's is long gone, as is that beautiful train station.  The thrill of shopping in downtown Atlanta is only a memory.  But I like thinking of Novembers past, of chrysanthemums and cold spells and the simple happiness of walking in the frigid darkness along an Atlanta street.  I still feel inside like that 19-year-old whose daddy stopped and bought her that big yellow mum.

So, now that I've learned that life begins at 70, I'm actually looking forward to the years ahead.  I honestly believe there will be some more good Novembers down the road.  That's a comforting thought on this cold morning, remembering this same date almost four decades ago.