Poppies for my brave cousin 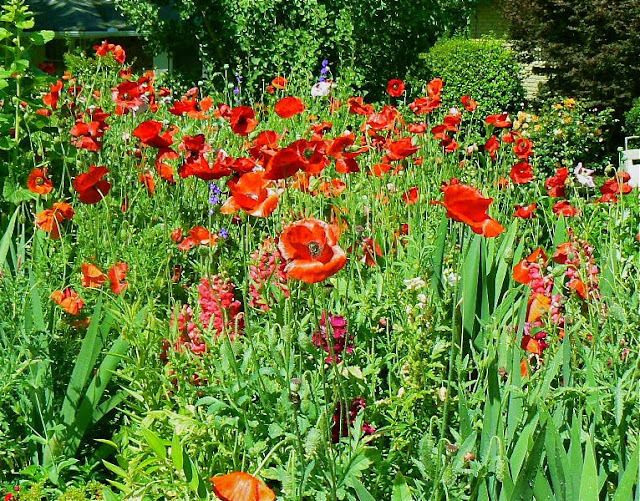 Last Saturday morning, I went down to Georgia State University (I didn't know they owned so many tall buildings) where a special ceremony took place.  When I got out of the car, a uniformed officer in the U.S. Army guided us to more young men in army fatigues.  They, in turn, showed us the way to a lovely modern building where we took the elevator to a top floor.  From there you could look out over Atlanta in every direction.

The event was the dedication of an endowment fund for ROTC scholarships and education aids in memory of my beloved cousin, Colonel Lynn B. Stull, who died of a heart attack in February at the age of 67.

Lynn and his brother were an integral part of my childhood.  They were the only relatives on my Daddy's side even remotely my age.  Lynn was a year younger, and his brother Terry was a year older than I.  When they would drive up at Christmas or Thanksgiving or in summer, my heart would beat with excitement.  We had the best time, playing all over our property in town.  Later, when I was a young teen, I would drive them over to the farm in an Air Force jeep where I would perform ridiculous stunts, splashing through streams and bouncing over terraced fields.

Terry and I, who were a lot alike, would gang up on Lynn, who was gruff and full of bravado.  Once, we abandoned him in a pasture with a mean bull named Pudgy.  Just as Lynn was about to attacked by the huge creature, I swung the jeep around, and he jumped aboard just in time.  Terry and I often joke that we could possibly face eternal consequences from this one act.

But Lynn survived and went on to earn an ROTC scholarship to Georgia State, where he was an outstanding student and leader.  He was an infantry officer advisor in Vietnam and served with the Special Forces in the Pacific and Middle East.  He was Director of Asian Studies at the U.S. Army War College and was Defense and Army Attache at the U.S. embassy in Malaysia.  He went on to to earn his M.B.A.  All in all, during his 31 years of service, he served with great distinction and honor.

His brother Terry graduated from West Point and served two tours in Vietnam. He also retired as a U.S. Army Colonel.  I will have to write about him at another time, as I can barely think of what happened to him over there, the close calls and his extraordinary bravery at the height of that war.

So, today, I salute my cousins on this Veterans Day.  I'm so proud of them both, and I am especially proud of this honor paid to Lynn.  In addition, I am greatly relieved that something terrible did not happen to him that day in the pasture when an underage driver showing off could have prevented him from a stellar life as a revered officer and much-loved husband, father, grandfather and friend.  I will love you forever, Lynn Stull.

Flanders Field poppies:  Plant in late fall in the South.  Sprinkle seeds over completely bare ground in full sun, and spread a light film of pine straw over the bed to hold the seeds but let in the light.
Posted by Martha Smith Tate at 8:28 AM 1 comment: