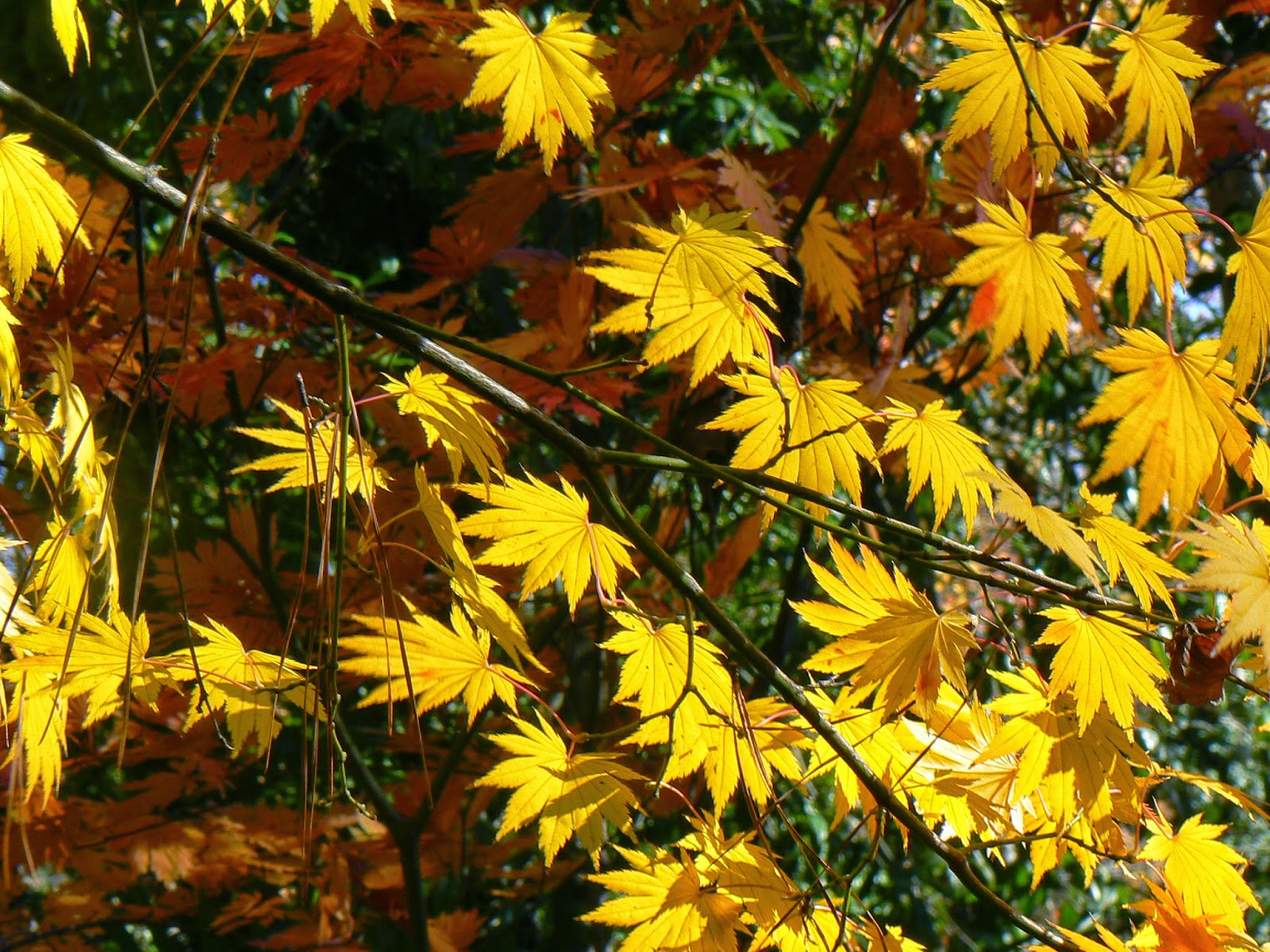 Saturday morning, I woke up frozen in fear.  The wind was howling outside.  It was still dark, but I looked out and could see limbs above me going in every direction. I was positive one would hit my slate roof and also that the electricity would go out.

Before daybreak, I ventured out, and even with my flashlight, I kept stumbling over branches down in the driveway.  My dog was terrified and didn't go all the way to the street with me to retrieve the newspaper.

The constant gusts continued all day long.  Yesterday, everything was still, and I was able to finish picking up the twigs and branches that had fallen and could assess the damage.  Most of the tulip poplar trees are leafless now, and there's more sun coming in my windows on the south side.  I was extremely lucky, given all the big trees around here, that none fell on a structure.

Meanwhile, I'm sure my friend, Japanese maple collector Bill Hudgins, was holding his breath.  Over the years, he has grown out special seedlings he has chosen from his extensive three-acre collection.  He evaluated all of them for fall and spring color and nurtured only those that resembled the named varieties.  They are all in containers, which means they will color up and lose their leaves before the trees planted in the ground (many of the latter haven't begun to turn yet).

Bill says that since he's lost his main helper to water hundreds of these trees, which are over six feet and well-branched, that he's offering them for a steal so he can make sure they get a good home.  The trees are $18 each, which in the Japanese maple world, is crazy.  Although he's sold tons in the last few days, he said this morning that he still has hundreds more at his house to sell.  They're in three-gallon pots, and are much bigger than I had originally thought.  Most are at least six feet tall.  He said if you plant them in the ground this fall, they'll be spectacular by this time next year.  Several friends called to tell me they had bought some and that they are beautiful.  If you've ever bought a Japanese maple, you'll know that this is a steal and probably a once-in-a-lifetime event.

Bill's fear is that with the wind and cold weather, the leaves on the potted plants won't stay much longer.   Over the weekend, he did bring more to his shop, Lush Life, 46 E. Andrews Dr., Atlanta GA 30305.  It's located just off West Paces Ferry Rd. in Buckhead, near the Atlanta History Center.  The correct phone number is 404-841-9661.  When those are sold, he has literally hundreds more.  He's  offering a cut rate if anyone wants a significant quantity.

When I went over to Lush Life to take some books last week (you can buy Margaret Moseley's A Garden to Remember in the shop), I couldn't believe that so many of these maples not only had beautifully-colored leaves, but had lovely trunks of green or coral or a rich brown.

Now, to Shelley's famous poem, Ode to the West Wind which I referenced in the title above.  I don't know how many times I have wanted to use lines from this poem in this blog.  But, every time I would read the poem through, I would remember that only the first and last lines - the most famous - are easily quotable.  The imagery is mostly dark and gloomy or ghostly or speaks of death.  I couldn't find one line that worked, although I do like:  "O wild West Wind, thou breath Autumn's being," and of course:  "If Winter comes, can Spring be far behind?"

So back to the Japanese maples.  I hope you can spread the word and find good homes for these beautiful trees before another "wild West Wind" comes through here again.