Looking for something else, a solution for hosta is found 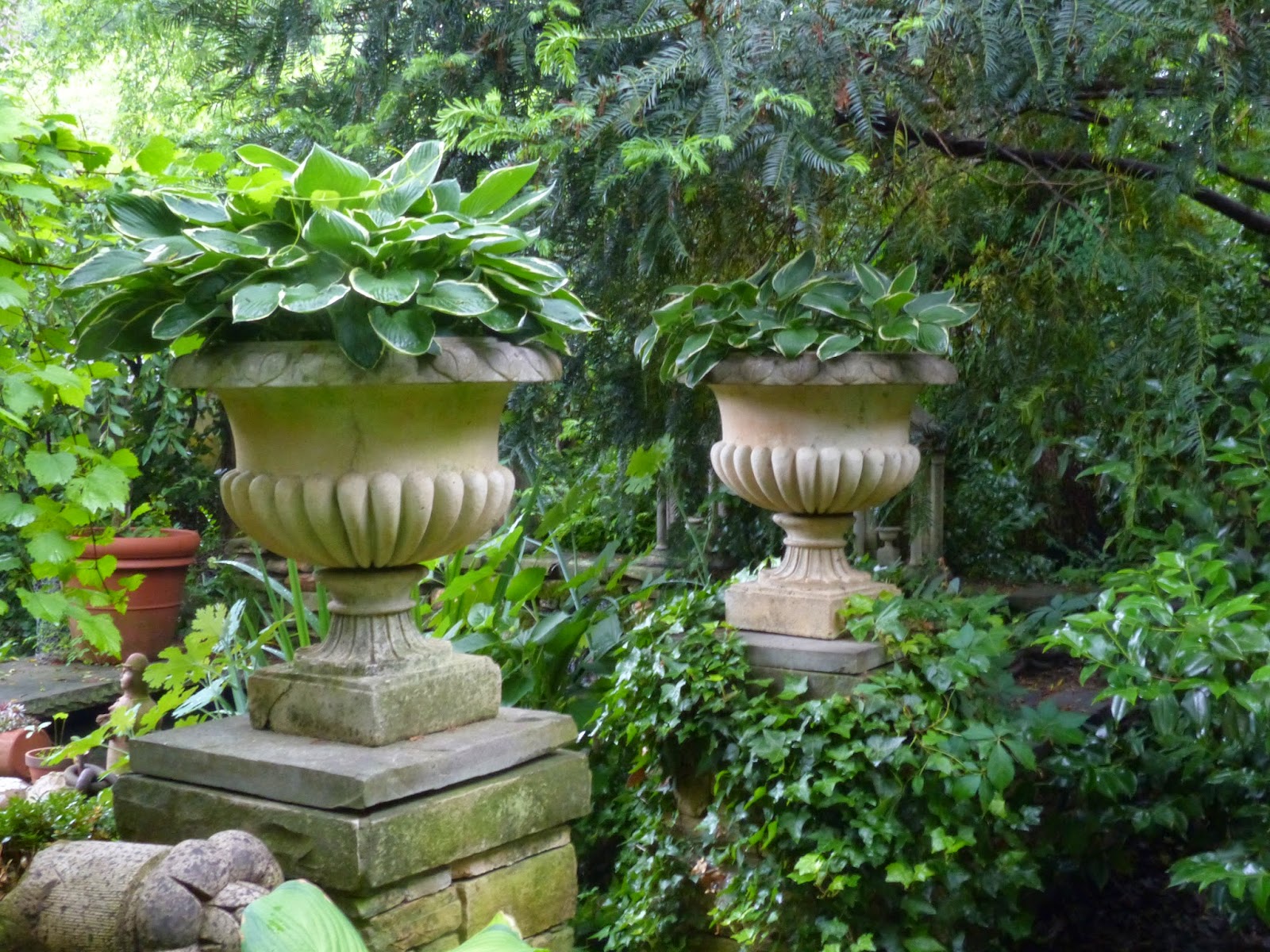 Yesterday morning on my way to church, I was speeding up my gravel drive when a young doe jumped out of the bamboo and in front of my car.  I slammed on the brakes and skidded, missing her by inches, if not an inch.  I stopped totally, fearing there were more deer to follow, which there often are.  She was alone, though, unless some smarter ones stopped when they saw me.  I did have to explain to the man who was walking his dog on the street what the commotion was all about.  He had just seen several in his woods across the street.

So, I was looking through photographs of Ryan Gainey's garden to find a shot I took of his 'Graham Blandy' boxwoods so I could talk about some that I just bought (the post will have to wait now), when I came across this picture.

Now that deer are a constant presence all around my house, hostas don't have a chance.  All had been okay up at the little house, but at the end of the summer, I fell down on my spraying routine.  Everything got shredded, including a huge 'Sum and Substance' Margaret Moseley gave me years ago, way before the deer came.

When I saw the above photograph, a light bulb went off.  I have these same two cement containers, and they've been sitting empty on my side patio for years.  I don't have a place I can put columns that would be high enough to avoid the deer (they don't mind standing on their hind legs, I've noticed).  But, I could have the containers brought around to the back terrace where I only have the chipmunks and squirrels to contend with.  It would mean dividing the hosta, which probably needs it anyway.  Amazingly, I think the root structure is still pretty large, despite the defoliation each year.

Here's the only problem.  In the late spring and summer, this is my only sunny spot on the entire four acres (not counting the slope at the little house, which will be addressed when my ship comes in).  I know that 'Sum and Substance' can take a bit more sun than other hostas.  Still, I would have to position the containers where they'd get some sort of shade in the afternoon, maybe from the other plants I have out there.

What I think I'll do is go ahead and take up the hosta (I'll probably need an ax, it's so large: also, what to do with the other blue ones?  They're the last to be eaten during the season) and get them planted.  Then, I'll have a while to figure out where to put them.

As I write this, I'm getting more excited about this prospect.  It just dawned on me that I could place them in front of the arborvitae where they've be shaded from the western afternoon sun.  That will give me another texture out there, and they'll be seen from the front door (my hall goes all the way through to French doors that lead to the terrace (a fancy word for what is really a concrete deck).

I did not even realize I had this photograph from Ryan's garden, so I consider it a lucky find.  Now, to go back and look at the rest of the pictures I took that same day to find the one I needed.  I'm so excited that I've already forgotten the gist of what I wanted to say about the boxwoods.  It will come back, I think.
Posted by Martha Smith Tate at 9:24 AM 3 comments: