A case of mistaken identity, or rather the author's error 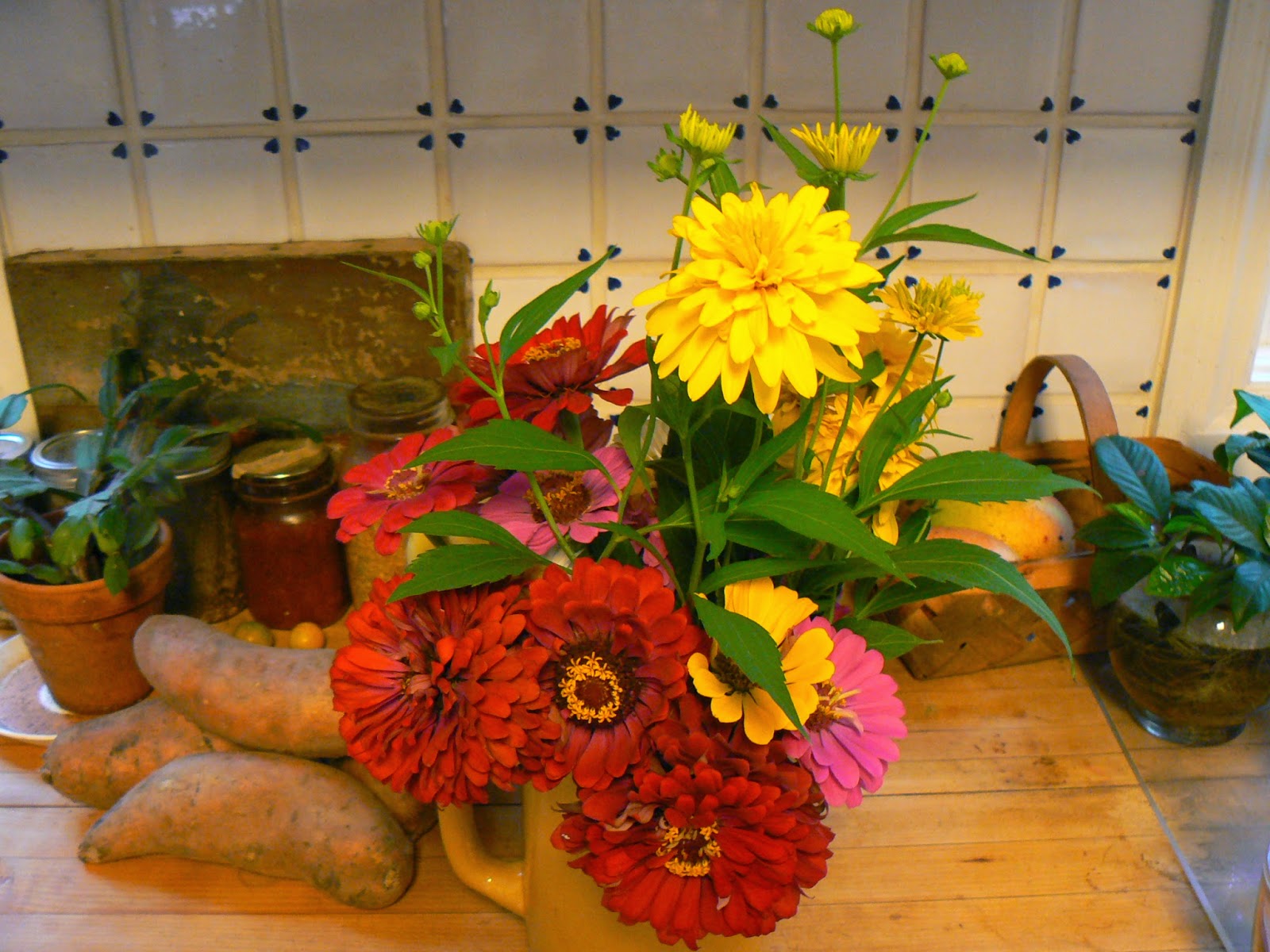 As I wrote yesterday's blog about my mother's yellow perennial, something didn't feel right.  I had thought for years that this flower was Rudbeckia laciniata.  But, I couldn't remember why I thought that.  However, when I looked up that botanical name, I came up with photographs that showed a brown center to almost all the flowers.  There was one that looked like Mother's, but I couldn't see the foliage to verify it.

So, I took out the DVD of Episode 102 of HGTV's A Gardener's Diary, where an identical plant is discussed in a Tennessee garden.  Before I saw that footage in 1994,  I had never seen another plant like Mother's.  I never would have dreamed it could be a rudbeckia (I always think of black-eyed Susans, with some sort of dark or green "eye" in a yellow daisy-like configuration).

In the show, the host indicates that this is a heliopsis.  Sure enough, I looked up images of heliopsis and found an identical flower.  So, why was Rudbeckia laciniata lurking in the back of my mind?  Yesterday, before I looked at the episode, I had thought I'd remembered that it had been identified as such by the show's host and the gardener.  No, they said, it was a heliopsis.

So, I went with that, still wondering where I had gotten the idea that it was Rudbeckia laciniata.  I had been mistaken, I concluded, and went on writing, identifying the plant as likely some form of  Heliopsis helianthoides

"I think it is possible that your mother's yellow flowers are Rudbeckia laciniata or cutleaf coneflowers — a double variety, possibly ‘Goldquelle,’ ‘Hortensia,’ or ‘Goldenglow.’

This 3′ to 5′ rudbeckia — usually seen with single coneflower blooms — is native to eastern North America. A double variety appeared in 1897 and became popular as an “outhouse flower,” planted to shield privies from view. I have a number of them in my garden here in Rwanda, an import by some previous occupant."

I quickly googled R. laciniata images, and what came up?  Mother's flower - tons of them!  What did I do yesterday that didn't give me the same results?

When I wrote for the Atlanta Journal-Constitution, I was a rabid fact checker.  I was terrified of making a mistake.  I will say that I didn't make a whole lot of errors, given the number of columns I wrote over 21 years, but the ones I made were huge.  The worst offense was when I said that a yellow form of Boston ivy called 'Fenway Park' came from the Green Monster within the ball park.  I had read this in a catalog that sold the plant, never bothering to check anything else.  That time, all I would have had to do was to walk into my late husband's library and look at a photograph of him pointing to the obviously devoid-of-foliage wall inside Fenway Park.  I received the most scathing rebukes for this.  The paper had to run a correction.

I am readily admitting that my identification of the perennial was a mistake and that Cindy from Rwanda is absolutely correct.  Of course, I am forever going to think of this as an "outhouse flower".  It would be an excellent one for that purpose, as it is tall and would grab your attention away from the structure.

So, thank you, Cindy, for enlightening me.  I will never know why I rejected my first instincts.  I am hereby avowing that the flower in the bouquet above, taken from Mother's garden years after she was gone, is indeed Rudbeckia laciniata, a native American plant that should be in everyone's sunny summer garden, or at least beside everyone's privy.

Note:  I can't resist telling what is in the background of this photograph.  The mustard-colored pitcher I hauled back from France.  I bought that raggedy painting leaning against the tile backsplash in a Provençal village market where I was practically the only shopper on a Sunday afternoon.  The tiles I bought in southern France (I've forgotten the name of the town!) and hauled back on a plane, along with an iron rooster weather vane (this was when you could do this sort of thing).  The jars you see are l-r:  okra pickles I made.  I burned myself on the peppers and had to sit up all night with my hands in a bowl of ice water. I wore rubber gloves when I made the next ones;  a jar of canned tomatoes with 2001 written in my mother's handwriting on a strip of masking tape.  That meant she was 91 when she grew and canned them;  a quart jar of Mother's soup mix, containing Silver Queen corn, okra, tomatoes and baby lima beans from their garden.  It's not marked, but it likely dates from 2001, as well.

Posted by Martha Smith Tate at 8:11 AM 2 comments: