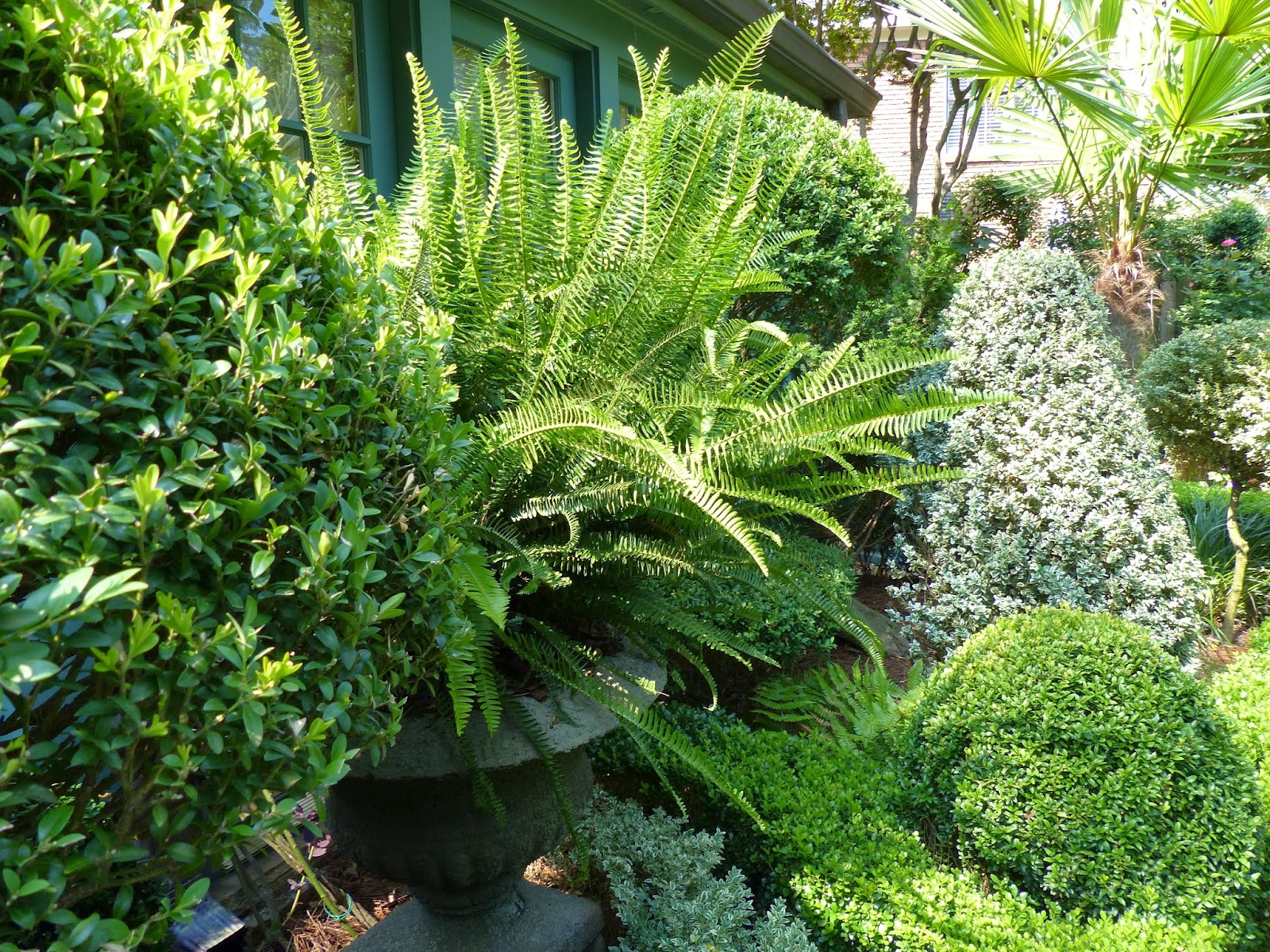 When I was first married and had my own little house (all 800 square feet of it), I was crazy for houseplants.  Oddly enough, the kitchen of the 1926 clapboard cottage (painted dark green, as it still is), had a great place for indoor plants.  There was good light, albeit from the northeast, and enough counter space to hold a good many containers.

I ended up with a mess, however.  First of all, I was convinced I needed two Boston ferns.  Of course, when I purchased them at the grocery store, they were perfection.  I didn't even mind that they were way too big for the space and overwhelmed the kitchen.  By the time a couple of years had passed, however, I had a lot of brown stems and shriveled leaves which needed to be picked up every day.  And, watering them was a misery.  Either I transferred them to the kitchen sink, which had to be cleaned afterwards, or I watered them in place, necessitating a mop-up job.  I guess I was not dedicated enough because fooling with them was not easy for me.  The experience cured me from ever buying another one.

I did have luck with some kind of climbing plant (a drawing of it is in a well-worn houseplant book, which is upstairs somewhere; actually, I wore the book out the first few years I had it.  I don't think I've opened it since).  I had the vining plant (dark, thick leaves) trained over the three kitchen windows that let in too much cold in the winter and too much heat in the summer.  Ever since I stepped foot in France, I'd had a passion for vines.  I had nowhere else to have any on the outside, so that houseplant that went forever added a lot of charm, to my mind.  At least it wasn't messy.

When I walked into Louise Poer's garden a couple of weeks ago, I saw this beautiful fern she had placed in her garden to blend with the hardy shrubs that grow in the ground.  Lots of people do this, I know, but I especially liked this fern because it looked like it couldn't get messy like the one I had.

When I moved into this house (the original cottage is still at the back of the property; we built this one), I didn't have the right space for houseplants.  I had specified a thick outside wall for my kitchen, so I could have good, deep windowsills.  Somehow, the contractor missed this and put the thick wall at the back, where it does no good whatsoever.  So, I ended up with little room for houseplants.  Right now, I have a shamrock (which has been in the same four-inch plastic pot for years), a beautiful velvety, black and green begonia (a workman rescued it from my kitchen shelf, took it home and returned it to me healthy and huge), and a Christmas cactus that has been trapped in a tiny clay pot for years.  It has had one bloom, which appeared about a month ago.

Next week, after I get some chores done inside, I'm going to repot that poor Christmas cactus and give it a chance.  Ditto the shamrock.  They deserve better.  I'll also try to give them a summer home outside, but I'm not sure the chipmunks will allow it.  I'll have to see how that goes.

I am planning a lot of garden work this fall, and I think I can even carve out a place for one of those non-messy ferns to pass the summer months.  Otherwise, I'll just have to admire other people's indoor plants.  I always thought I'd have a greenhouse where I'd grow big, beautiful plants and switch them out in the house all winter long.  That never happened, but there's always the possibility.  And, I may even clean off two shelves in my kitchen and try some more tender plants.  Even if it's about indoor gardening, I guess one can always dream.
Posted by Martha Smith Tate at 1:32 PM No comments: