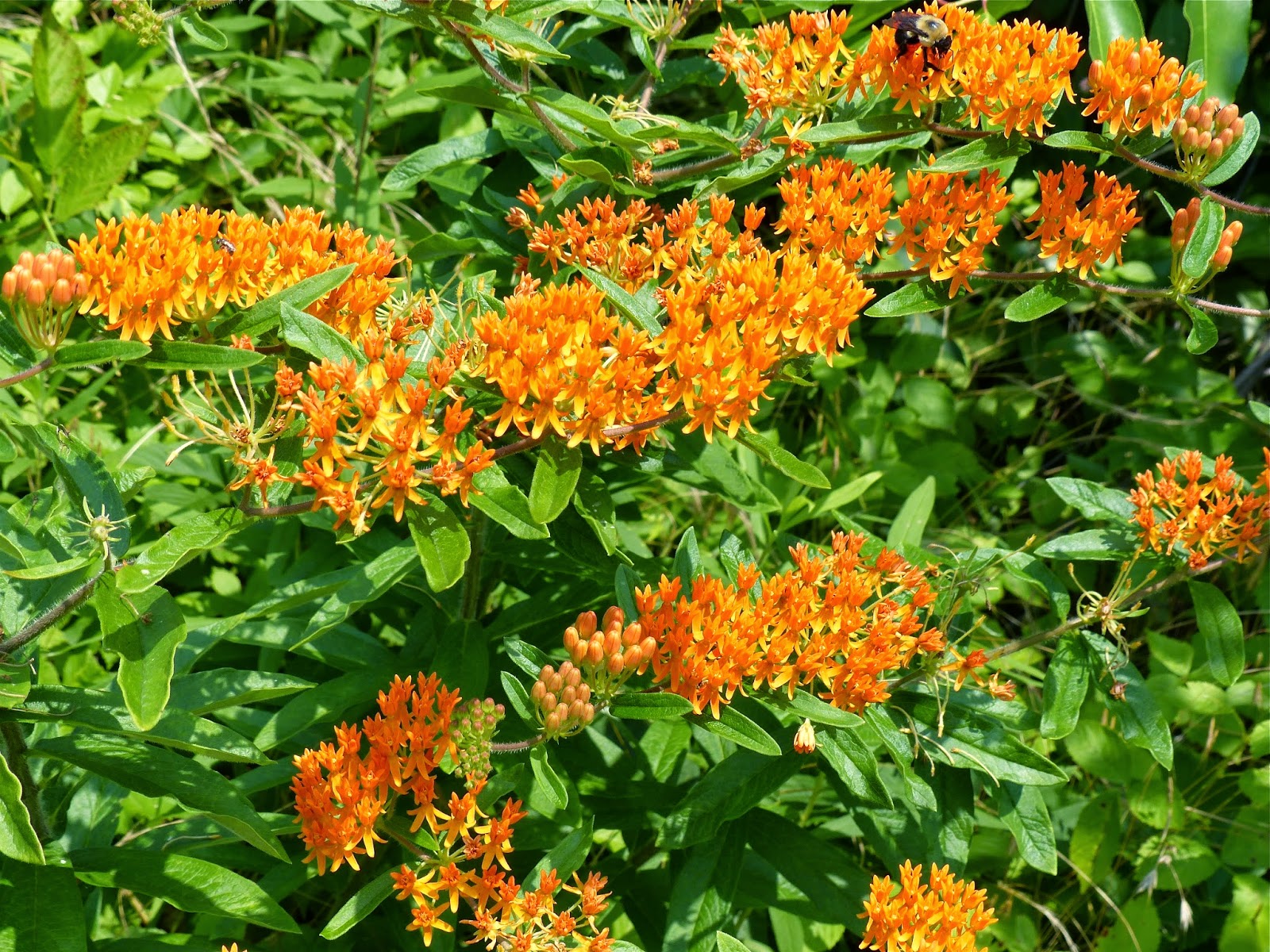 I was desperate for a cutting garden with something in bloom every day of the summer.  I wanted all the colors - purples, yellows, blues, orange, pink, white.   I could have all the zinnias and orange cosmos I wanted from Mother's garden.  But, at my house, I really wanted perennials that would bloom in waves all season long.

One of the flowers I wanted most was orange butterfly weed (Aesclepias tuberosa) - not the annual milkweed, but the perennial one.  At the time, it was hard to find in garden centers.  I think I ordered it a couple of times, though, and it didn't live.

This was back in the early 1980's when I had a little sliver of sun to deal with and made a couple of rectangular raised beds.  I had white garden phlox.  I had rubrum lilies.  There was red monarda (which contracted mildew), a puny pink dahlia I'd ordered through a catalog, some yellow, very invasive evening primrose (no good for cutting) and some weak blue platycodons.  I also had some fairly robust   'Becky' daisies (although I didn't know they were called that until later; I got mine through the Farmers and Consumers Market Bulletin, where I suspect 'Becky' came from, too).  In the fall, there was the aggressive tall blue ageratum, which came along with the monarda someone gave me.  I still find that it pops up in the oddest places.

So, as I was driving up U.S. Highway 29 on my way back home, I spotted a huge stand of butterfly weed in full bloom.  It was mid June.  I thought to myself, "It's okay to dig just one plant.  No one will miss it."

I took my trusty sharp shooter shovel which I hauled around in my trunk so I could garden at my parents' farm.  The ground was hard as a rock, and I was closer than I wished to the railroad tracks.  I finally broke the ground all around the plant after a lot of effort.  I thought I was making progress as I dug deeper and deeper.  But the main root went on and on.

What was it going to take to get this plant out of the ground?  It was hot, and I knew I was doing something wrong.  Someone even honked at me.

What I should have done was put the dirt back and hope the plant lived.  But no, I was committed.  I made a decision that I would go ahead and take the part I had dug.  So, I cut the main root off and put the dry plant into a grocery bag.

This story does not have a happy ending.  I planted the flower right when I got home.  My ground was as hard as that on the side of the road.  The flower wilted and never recovered.  I had stolen a native plant, one that attracts bees and butterflies, and I had killed it.

For my 50th birthday, someone gave me a collapsible trowel for the glove compartment.  The intent was to have a tool ready when I saw something in the wild to be able to dig it right then and there.

But, if my memory serves me well, I never took another plant after my failed attempt at the butterfly weed.  I have not participated in any officially sanctioned plant rescues, but I think that is a worthy idea, and I applaud those who save good wildflowers from destruction by a bulldozer.

So, the other day, I contented myself by stopping on the side of the road near the farm to take photographs.  We used to have butterfly weed in the pastures, but the hay man likely took care of that, I'm sorry to say.  I haven't seen any in years.

As for my regretful adventure, I wish I'd had the Internet back then.  I read this on the Clemson University Web site:

Posted by Martha Smith Tate at 6:27 AM 2 comments: