How can this be the same hydrangea? 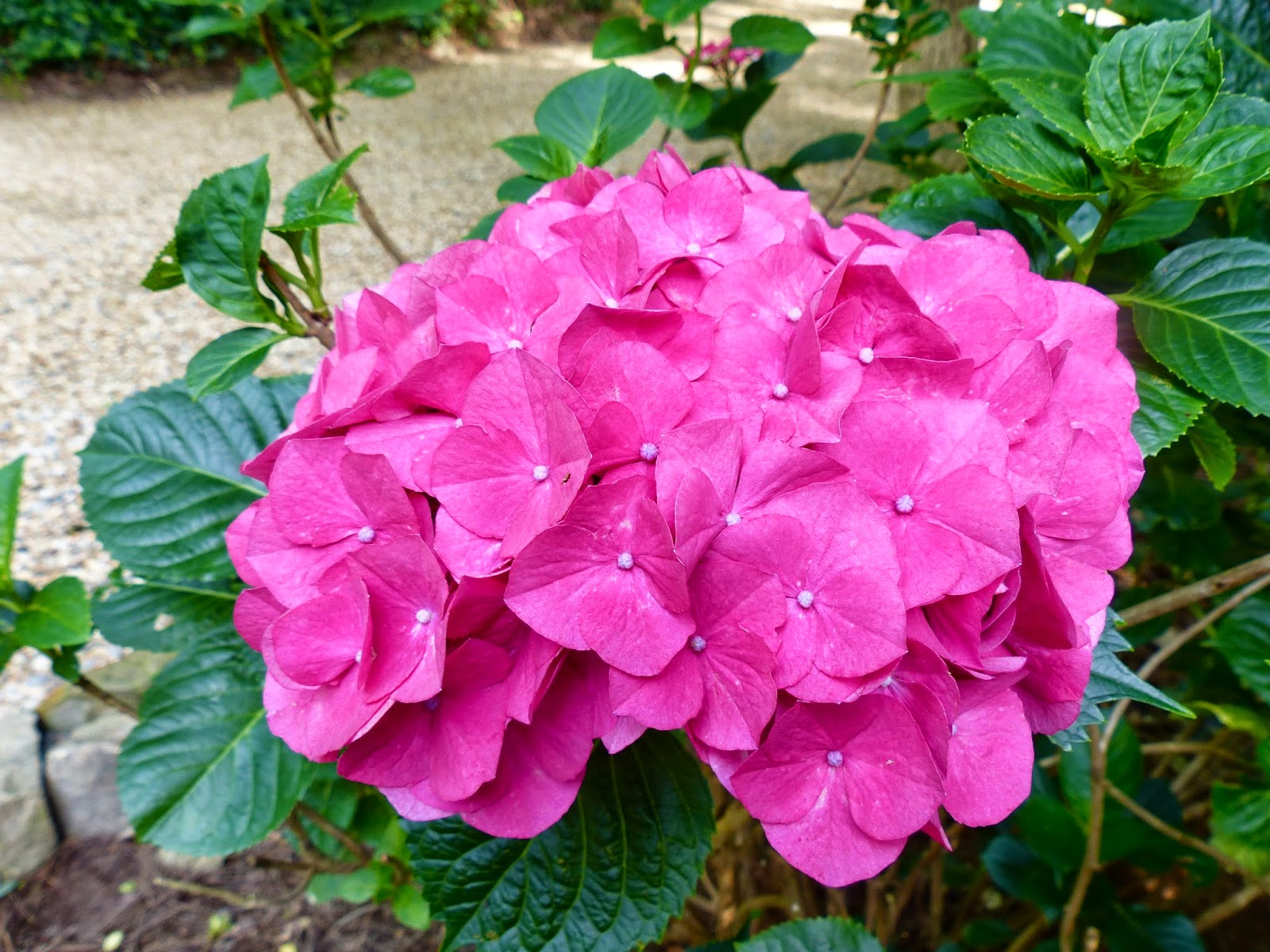 If you'll put the word "purple" into the white search bar at the top left of this page, the second blog entry that comes up is dated June 8, 2012.

You would think the pink hydrangea pictured above would have absolutely nothing to do with the soft grape one from two years ago.  Yet, it is the same plant.

There's no reason to re-tell the story of how I came to have this hydrangea.  It's all there, in long form.  In brief, it belonged to my mother and had been at the farm (no telling where she got it or when) for as long as I can remember.  It was dug up and brought in a giant container to my house here in Atlanta.  Its first June here, it produced lots of medium- to- small blooms of a lovely purplish color - not the deep, rich purple from the farm - but still quite pleasing.  The lighter color is what you see in the 2012 post.

I left the hydrangea in the container over the winter of 2012-13, trying to figure out where to plant it. Obviously, I should have acted more quickly.  Last summer, instead of the grape colored flowers, I was looking at horrible Pepto-Bismol pink blooms.  There was no vestige of its former self.

In October, when my daughter got married here at the house, the hydrangea had to be moved from its spot in front of the chimney.  I didn't watch to see how they did it, but they took it down to the base of the back outside staircase.

I had another very large hydrangea rooted for me by my friend Jane Kyburz.  She had brought over a bouquet a few years back with a light pink hydrangea in it.  I asked her to layer one for me, and she did.  I bought a huge fake terra cotta container for it, and the plant has grown into a lovely giant.  The two hydrangeas were sitting side by side.

Then winter came with the threat of a five degree freeze.  I had the pots moved under the concrete deck.  I didn't cover them, but they were pretty well protected.  So, I was ecstatic to see the little broccoli flowers coming out on the stems in spring.  I had hardly any dead wood on either plant.

One day a few weeks ago, one of the men from the farm brought me a boxwood to go near the new arch garden.  He suggested I plant Mother's hydrangea there beside it, so it was dragged back up the hill.

I was so anxious to see how the flowers would turn out, even though not much time had passed since it was put in the ground.  I was disappointed.  While it's a deeper hue than the Pepto-Bismol, there's still  no trace of its former color.

So, I guess I will have to see what next year brings.  It could be that the acid in the soil will change the color back to purple.  I'm hoping that will happen.  I need to consult Elizabeth Dean of Wilkerson Mill Gardens and Hydrangea.com, who says the hydrangea is probably 'Merritt's Supreme.'  I'm thinking this started out as a potted plant with colored foil around it.  Maybe not.  I wish I'd asked Mother where she got it.

For the time being, I must admit that as you come down the driveway, the rosy color does look rather pretty.  But the one I'm excited about is Jane's hydrangea.  For years, I had admired a photograph of a  light pink hydrangea in a book I have on French gardens.  Coincidentally enough, the French flower is in a container at the base of a staircase on the outside of the manor house belonging to Robert Mallet's family in Normandy.  My children and I visited Robert in 2006, and that big container was still there.

So now, I, too have a large container with a light pink hydrangea sitting at the base of a (very plain) staircase.  I had contemplated putting some lime on it last winter, but I chickened out, afraid I'd hurt it.  For the foreseeable future, it will stay in its container, and I'll try layering it to produce two more plants (still copying Robert; in another book there is a photograph taken in fall of two light pink hydrangeas in containers at the Bois des Moutiers; now all I have to do is build a stone colonnade; that may take some doing).

Back to Mother's hydrangea.  I'll have to think about doctoring the plant, or I may just wait and see what happens and then take action later.  One never knows with hydrangeas.  The late Penny McHenry, founder of the American Hydrangea Society, would always say that when it comes to color, hydrangeas would make a fool out of you every time.  I think she was right.


Posted by Martha Smith Tate at 6:47 AM No comments: