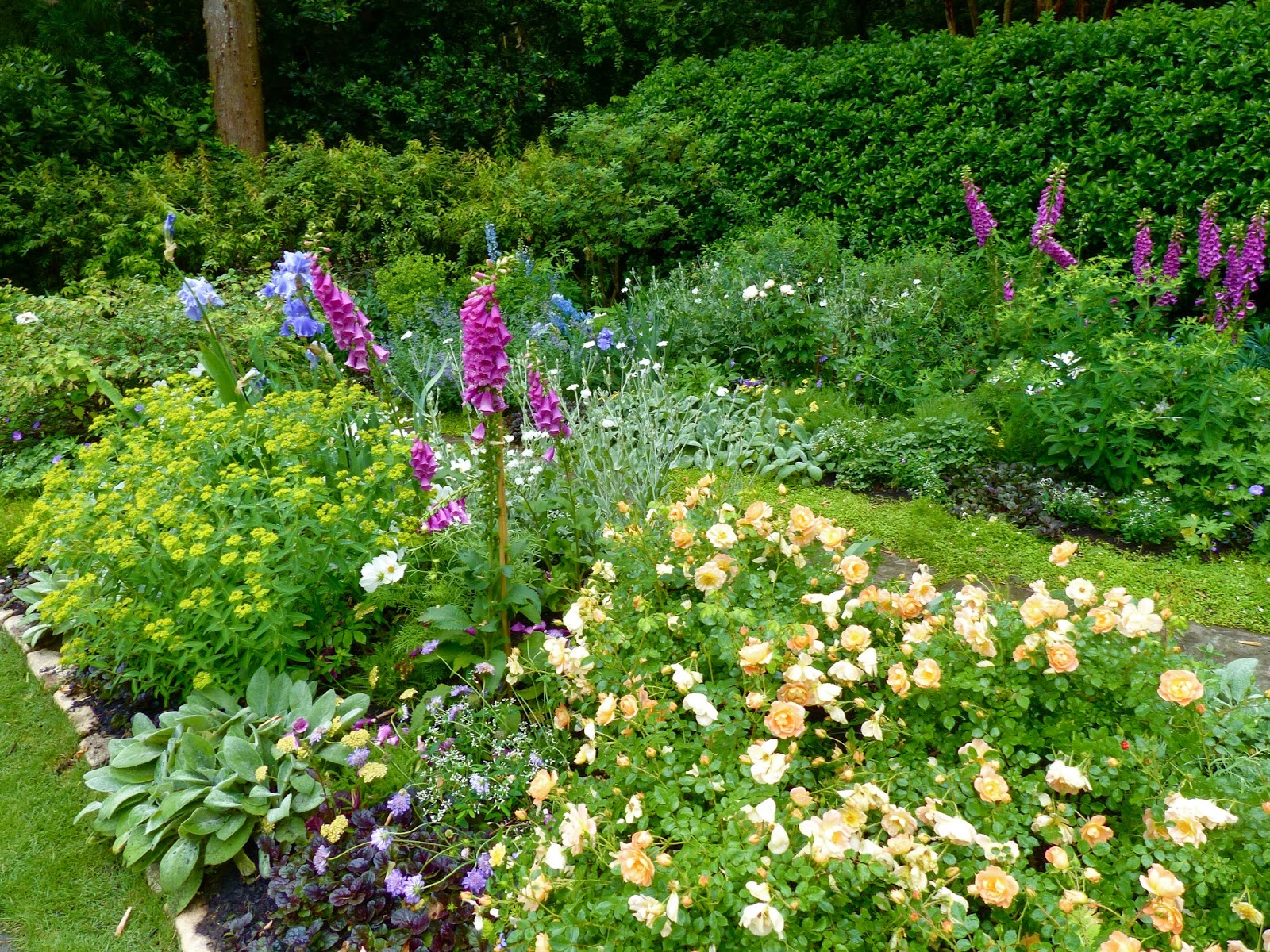 I have a friend who is in England right now, I think for two weeks.  She pretty much goes every year just to visit gardens.  Last year, she included France, as well.

I used to say that I would like to come back to earth as Louise.  Not only does she have an exquisite garden here - it is small, but is so unique and well done that you think it's larger - but that yearly trip to England just to see gardens must be dreamy.

The above garden does not belong to Louise, and actually doesn't even resemble hers at all.  But, it did remind me of the 1980's English garden craze we all went through, studying Gertrude Jekyll and reading Christopher Lloyd and wishing we could have all those flower-filled borders.

I saw this garden Mother's Day weekend on the Atlanta Botanical Garden's tour, and it reminded me of what so many of us had aspired to.  I never had a chance because I had no flat terrain and no sun.  Still, I would plant foxgloves and buy delphiniums and lilies and do my best to have flower borders.

Back to the tour.  I circled around the above garden several times.  It consisted of this long, colorful border on one side of a lawn, a very shady woodland walk at the back of the garden, some lovely hedges and well-designed containers.  One of our great Atlanta designers, Jeremy Smearman, did the garden for Mary and Jim Rubright.

The good thing about touring this garden was that the owners or Jeremy had made a list of all the plants in the border.  So, when I asked about the low-growing, apricot-colored rose, the docent was able to tell me it was 'Peach Drift'.  One thing I should have written down was the name of some miniature foxgloves of the same color.  They were further along in the border, but Jeremy had planted more 'Peach Drift' in front of these unusual foxgloves which surrounded a low birdbath.  The effect was stunning.

I don't know if you are able to discern from this photograph, but one can walk through this border and see the plants up close.  There were also foxgloves, white rose campion, delphiniums, euphorbia, lamb's ear, light blue bearded iris, peonies and heucheras, to name a few.

During the 1990's, there was a backlash toward the English-style border.  Books came out trying to define the "American garden" and tell us we should be planting prairie grasses and black-eyed Susans.  I paid no attention to any of those.  Although I only have a start (really a "starting over") on a garden, I don't have a single planting of ornamental grasses.  They just don't go with my house or my vision of what I want my garden to be (this is not to say I haven't seen some wonderful swaths of grasses that I thought were beautiful).

Anyway, I did want to share this view of what I used to dream of in the 1980's.  I'm now veering back to garden rooms (we drove that term into the ground, as well), since I have such an up-and-down topography.  I can still take elements from things I saw in France and Italy (I haven't been to England since my honeymoon over four decades ago) and mix in flowers you always see in English borders.

I've rambled all over the place, but another thought here is that there is a lot to learn by going on these garden tours.  I always find flowers or vignettes I like or plant combinations that would work for me.  I can't do the garden above, but I can admire many of the elements and find out the names of flowers I'd like to have.  In fact, I've already looked to see if Pat Henry carries 'Peach Drift' at Roses Unlimited. She does.  It's one I might put on my list, if I ever get out of my pink rose phase.  I'd especially love it with those miniature foxgloves of the same color.  Wish I'd written down the name of those.

Posted by Martha Smith Tate at 3:20 PM No comments: