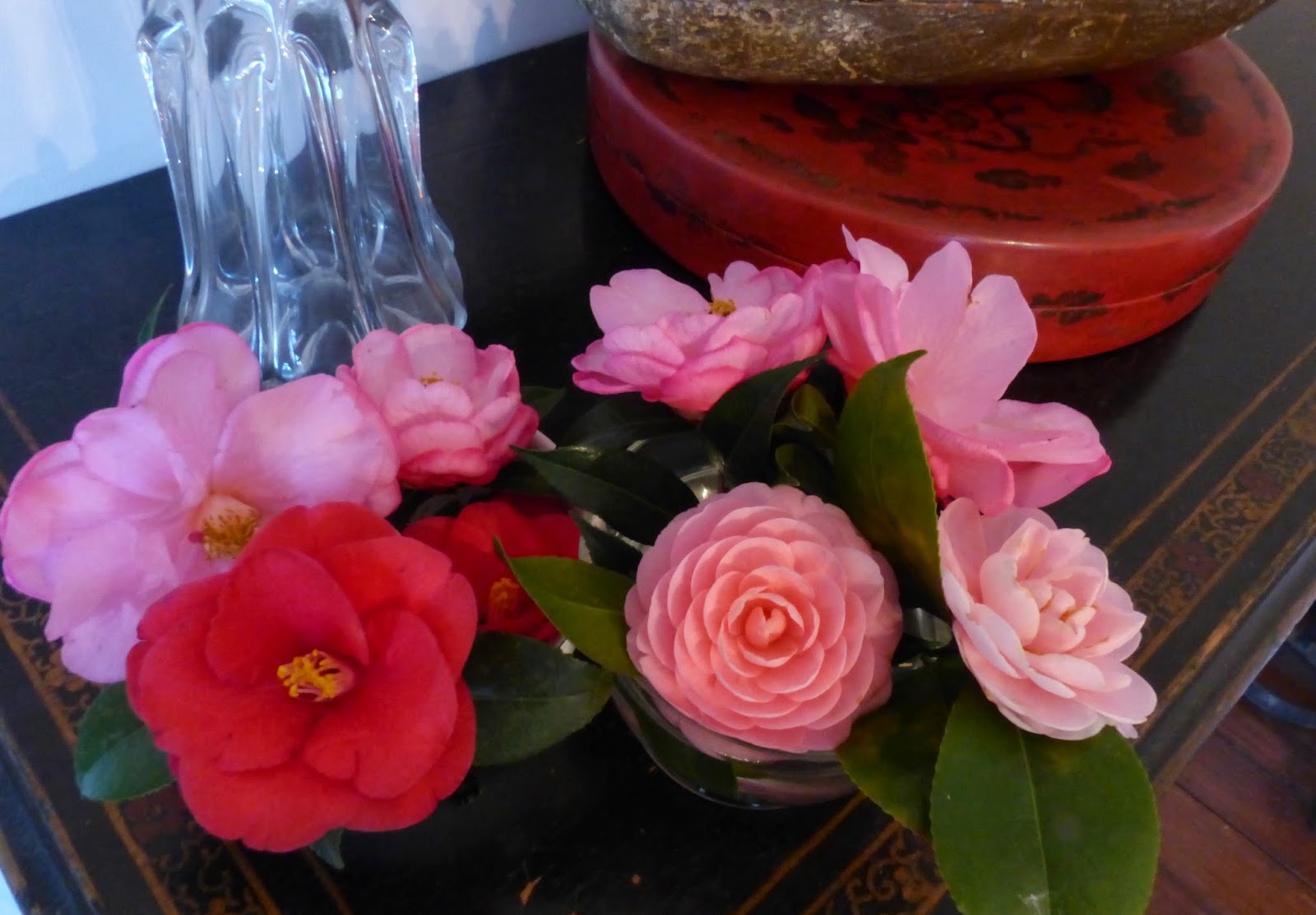 It was the quickest of rescues.  I arrived home last evening after having been gone for most of the day.  I had only a few minutes before I had to head out to dinner.  The good thing was that it was still light out, and I could see what I was doing.

The predictions for last night were for temperatures in the mid-twenties.  That meant that the camellias that were open would not make it.

While it's true that a red or any dark camellia will fare better in the cold than light-colored ones - especially the whites - I wanted to bring in as many as I could pick.  That proved impossible to do when I got to my new red ones.  There were a lot of blooms open, and they were pretty small.

So, I grabbed 'Taylor's Perfection' - that's the big open medium-pink one not quite in focus, and a couple of the reds (I have two different ones, and both names escape me at the moment - actually, they may escape me forever because I don't remember where I put the tags).  The pink one in the middle I have the name of somewhere, but it is almost too perfect to be true.  I did finally plant a 'Pink Perfection', but that's not it. This is a bigger bloom, although none are as big as last year.  You look at it and think, "How can anything be this precisely formed?"

Everyone is talking about the paltry camellias this year, but not Margaret Moseley.  I went out there last Saturday, and every shrub - many 15-to 20- feet tall - was loaded with flowers.  I don't know why they weren't hurt.  Even the light blush-pink 'Magnoliaeflora', which has been blooming since December, was laden with flowers.  I don't understand it.

You can tell I'm no arranger.  I threw a few of the flowers in a couple of bowls and got out my new camera.  I left my old trusty one at Margaret's, so when the weather warms I'll go out and retrieve it.  I'm not sure what to do with this new fancy one, so I was lucky I even got a picture.

But, back to the camellias.  The white ones didn't make it into the picture - too many brown edges.  And, I just checked, and the red ones I couldn't pick look no worse for the wear.   They're actually a deep rose color when you get up close.  They have a French name like 'Le Comte de Something'.  I think the flowers will be bigger next year and maybe deeper red like I remembered when I planted them last March.

As we know, camellias can be iffy around here, but if you're in Chicago or New Hampshire reading this, I doubt you have any sympathy.  My kitchen counter is laden with vases of daffodils, and I have white quince and spirea branches in the hall.  Given all the cold weather we've had, this really isn't a bad show at all.
Posted by Martha Smith Tate at 4:16 PM No comments: