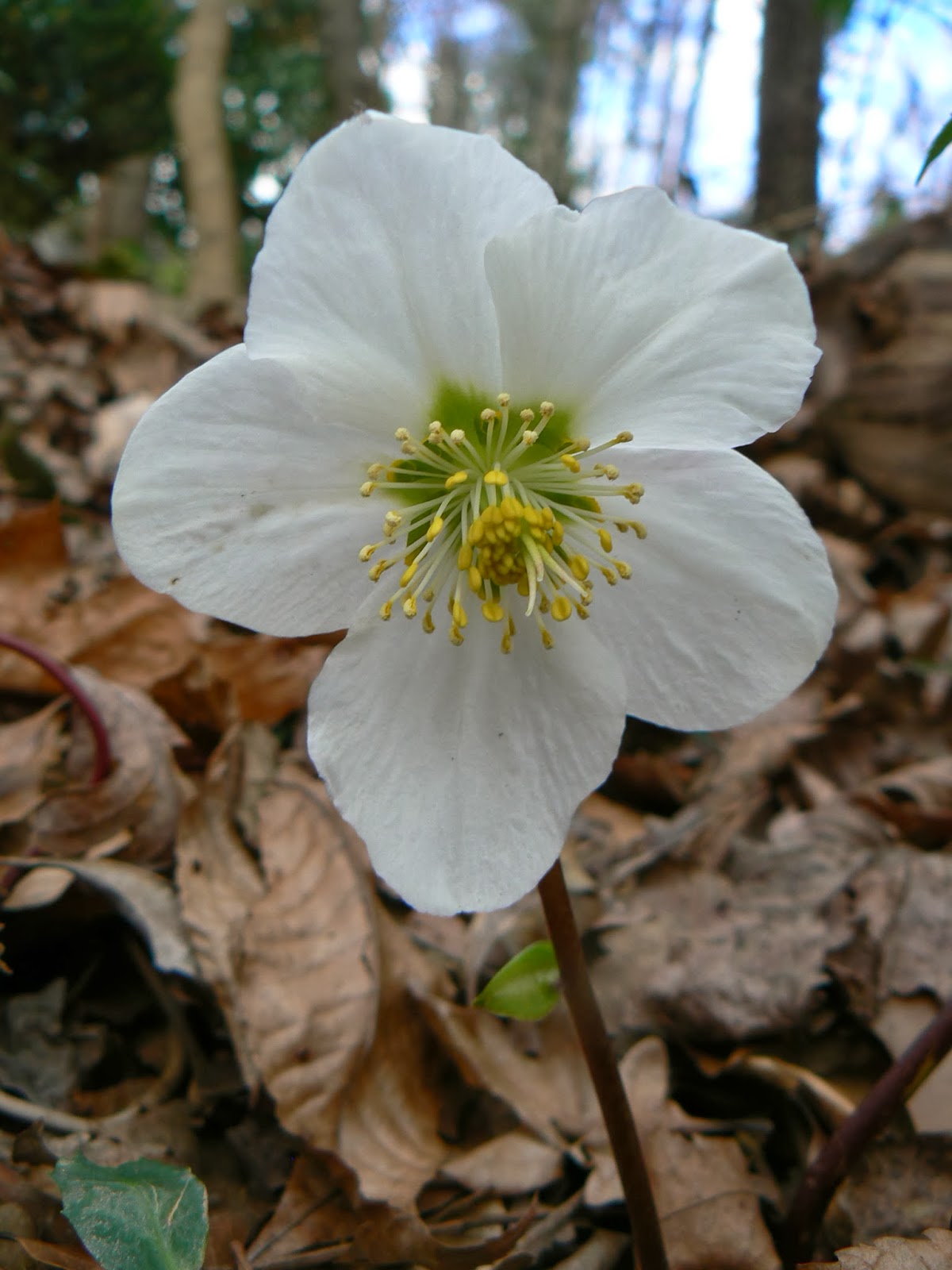 When everyone was talking about the Beatles the other week, I wondered how many people could say where they were the exact moment they first heard "I Want to Hold Your Hand".  For me, it was Christmas of my freshman year in college.  I was home for the holidays and was walking through our den.  All of a sudden, I stopped in my tracks.  A song was playing on the intercom system, set on a local radio station.  It was so different from anything I had ever heard.  I was instantly taken in.  When I got back to school in January, everyone was Beatle-crazy, including me.  In fact, I still am.

Likewise, I can remember the moment I saw a Helleborus niger in person for the first time.  The late Jitsuko Johnson was walking through the Southeastern Flower Show.  This was when the event was held at the old Sears store on Ponce de Leon Avenue.  She was carrying the pristine white flower in a green Perrier bottle, ready to enter it in the horticulture competition.  I stopped Jitsuko and asked her what sort of hellebore this was.  I knew of the Christmas rose, but at the time, I didn't know anyone who grew it.

My praise was so effusive that Jitsuko offered to give me a plant.  Sure enough, one day she showed up at my house with the perennial, which can be finicky to grow.  The next winter, however, mine had three blooms.  This was in the mid-1990's.

Fast forward to 2006.  Due to the course of events that played out that year, it seemed like a good idea to put my house on the market.  I was sure it would sell quickly.  A woman whom I knew through one of my parents' caregivers said she would love to come get some plants before I moved.  She came to my house, and we walked around, talking about what she could take.

One day when I wasn't home, she brought her son and dug a lot of plants.  One of them was my Christmas rose.  Although she only took only half the clump, there must have been very few roots left.

My house did not sell (thank goodness), and I ended up staying here.  My Christmas rose languished, though.  It put out new leaves every year, but no blooms.  I was particularly upset because in the interim, Jitsuko died of acute leukemia.  She had been such a special friend, and so I particularly cherished this flower she had given me.

Back in January, I saw that I was going to have a bloom.  I covered the tender bud with leaves, and it survived the five degree night and extended cold.  Then, right before we were expecting ice and snow, I checked on it.  It was up pretty far, although not yet unfurled.  I built a tent out of sticks and magnolia leaves to protect it.  Amazingly, the tiny structure held up against the elements.

Two nights ago, after having been gone during the daylight hours, I went out at dusk to check on the bloom.  It had opened and looked perfect.  But it was too dark to photograph.

Yesterday morning, I held my breath when I went out with my camera.  The flower was a couple of days old and not at its freshest, but it was a welcome sight.

For the future, I'm going to put some lime around the base (the plant is in the woods next to some Helleborus x hybridus) and see if that will help promote more blooms.  I know there are all sorts of new and improved introductions of Helleborus niger (and I want to acquire some), but this particular one will always be special to me, a reminder of a beautiful friend and a great and generous gardener.

Posted by Martha Smith Tate at 11:18 AM No comments: Links to this post