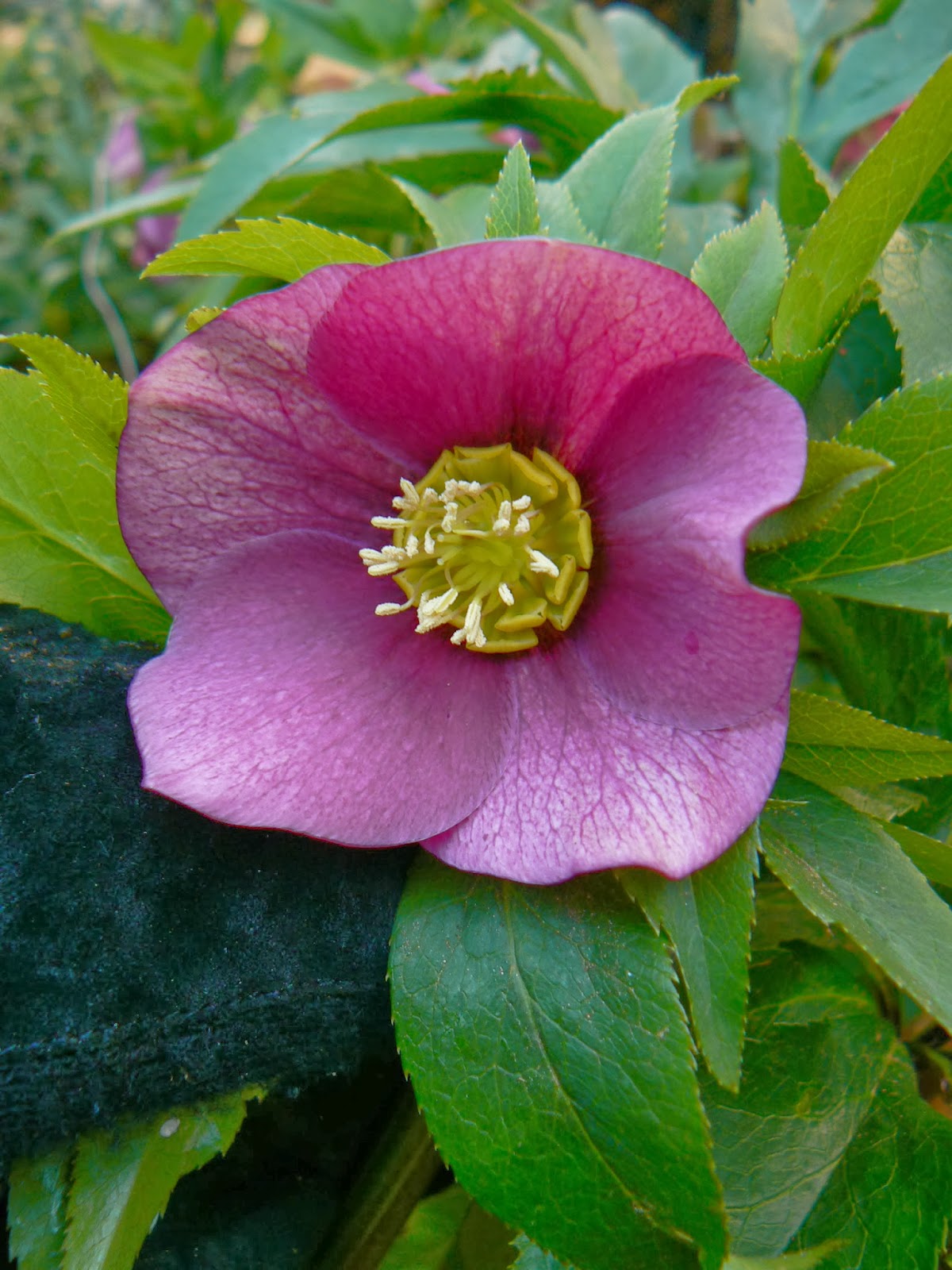 A year ago today, February 11, I took this picture in the yard at the little house.  This hellebore, which I've had for 25 years, came from the late Berma Abercrombie, who was a founder of the Georgia Daffodil Society and who was active in the national society.  She lived in what is now Chattahoochee Hills, but when I grew up I knew it to be between the communities of Rico and Roscoe in unincorporated Fulton County.  On her farm along the Chattahoochee River was a cement marker that said "Coweta County" on one side and "Campbell County" on the other.  That part of Fulton (Atlanta is the county seat) was Campbell County until 1929.

Anyway, Berma had a very refined and extensive collection of the genus Narcissus, with bulbs from England and Australia and from top American hybridizers.

She also grew chrysanthemums and iris and was active in those societies, as well.  Her peonies were well-known and large and floriferous, like those you see up North.

Once when I was out at her farm during daffodil season, she dug this hellebore (among others) and gave it to me.  I isolated it, thinking that I would only have this same color from the seedlings that grew up around it.  That's not the case with hellebores (I'm talking here about the Lenten rose, now known as Helleborus x hybridus) - they don't come true from seed, although the original will remain the same.  Thus,  I still know exactly which one she gave me because of its beautiful color.

I'm looking out my window now, anticipating the "catostrophic" ice storm that will come in overnight.  The cardinals seem to be more desperate this morning than usual.  Do they know what is on the way? I'm already dreading sitting here in the cold and dark.  I do have a gas stove and hot water heater and some firewood (why didn't I splurge and get those gas logs?), so it won't be unbearable.

I have covered the one bloom on my Helleborus niger with some leaves.  This plant has struggled to come back from being divided in 2006.  Finally, I have a flower, and I fear it's up too far to escape injury by heavy ice.

As for the above hellebore, it's not open yet, and the buds are still fairly close to the ground.  It's raining now with some suspicious looking drops that are not supposed to be there until tonight.  It's a very different February 11 this year.  Last year, it must have been cold, as I am wearing a glove to hold up the above bloom.  But, there was no precipitation, and daphnes and camellias were in full bloom.

After this is all over, which should be by Friday, I'll go up and see how everything fared.  I'm not worried that this hellebore won't live, because hellebores thrive in much colder climates than ours.  I just hate to see the blooms destroyed.  What a difference a year makes.
Posted by Martha Smith Tate at 7:06 AM No comments: