The black, white and red garden 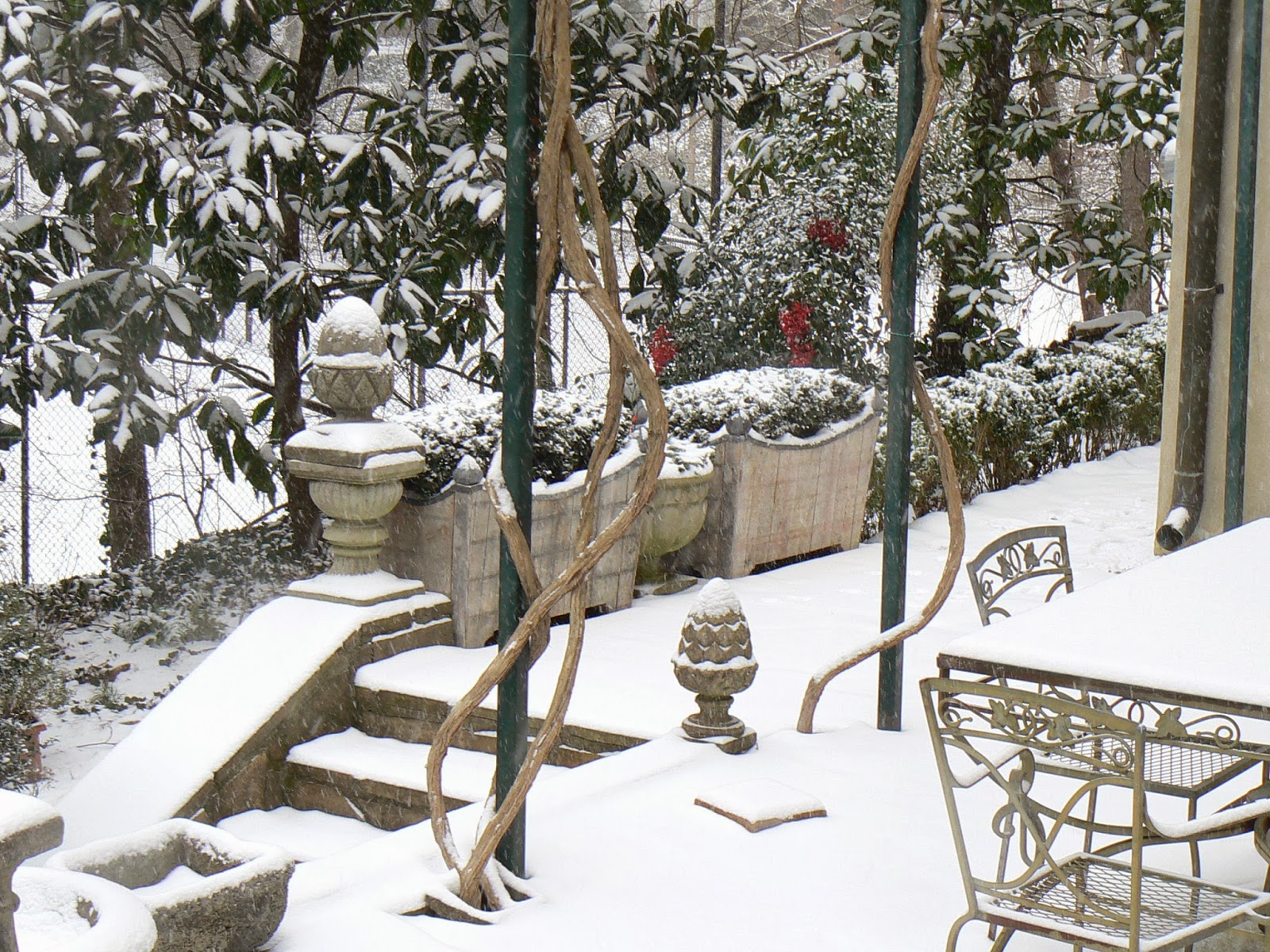 The scene from the side terrace on January 28, 2014:   The twisted trunks belong to a red trumpet vine that covers iron arches over the stone terrace.  Those long wooden planters from Restoration Hardware are left over from the wedding and contain Japanese box holly.  That's a volunteer nandina with red berries behind them.  I had threatened to cut the shrub down many times, but I've enjoyed looking out the window at the bright red.  I'm not so sure of its future, however.

A study of this photograph reminds me that I need to figure out something to block the view of the neighbor's tennis court.  This is a troublesome area, as the soil is poor, and the sun sporadic.  When the weather improves, I'm going to reassess this space and see if I can grow some low evergreens (even autumn fern has struggled, and it's really tough) to form a screen.  I think boxwoods are my only choice, but I'll have to improve the soil vastly to have good drainage.

This will be the last of the snow pictures for a while.  Today, I'm posting twice.  I looked back through my photographs and found some from January 28th in another year, and they serve to illustrate how different our winters can be in the South.

But, first I have to get on my soapbox.  I was here in Atlanta in January 1982 when the same thing happened as occurred yesterday.  An inch or two of snow is usually no big deal, even in Atlanta.  If the temperatures are a little below freezing, we enjoy the beauty for a few hours, and then everything melts.  The roads are not a problem.

In 1982, it had been below freezing for several days.  The ground was frozen, and the pavement very cold.  I had taken my then six-year-old daughter to a school interview about a mile away.  Around one o'clock, it started snowing.  Nothing major was predicted, and in fact, we'd already had a "cry wolf" situation earlier in the month.  Everything had closed because of a storm warning, and nothing happened.  People were furious they'd missed work or school for no reason.

But that day, when the snow hit the pavement, it immediately formed a glaze of ice.  I had lived in a ski resort  for a season, and I was as smug as any Northerner.  I had already driven across the country on a virtual skating rink in Oklahoma where trucks were jack knifed all over the place.  I breezed right through six inches of snow in Nashville.   But, this faintest trace of snow formed a glaze on the road in Atlanta that was deceiving.  It was impossibly slippery, and my daughter and I barely made it home.

Around 3 p.m., the entire city of Atlanta decided to shut down and head home.  Long story short, what we called "Snow Jam" happened.  My husband left Midtown at 3:30.  He only traveled a mile in three hours when he hit a brick wall.  Nothing was moving.  He abandoned his car and walked back to his law office where he spent the night.

Yesterday, the same thing happened.  The snow started hitting the pavement.  The ground was frozen, and the air temperature was in the low 20's, so a glaze formed.  Everyone headed home at the same time.  If you live in Atlanta, you know it's horrible traffic on any given day.  A skating rink quickly formed on all the Interstates and side roads where a good million or so people were trying to go all at once.

Meanwhile, I was here, looking out at the beauty of the snowy woods.  I took lots of pictures and watched the cardinals fight each other at the feeders.  I was greatly relieved when my neighbor and her daughter showed up around 10 p.m. on foot.  I had been desperately trying to reach her, knowing she had picked her daughter up at school.  After seven hours in their van with some near misses, they abandoned ship and walked the remaining two miles home.

I feel guilty that I didn't have to go anywhere yesterday and got to enjoy the beauty well away from the traffic standstills.  I apologize to all who had to endure such misery.  I hope all is well now or soon will be.