Roses- "You should have been here the next week." 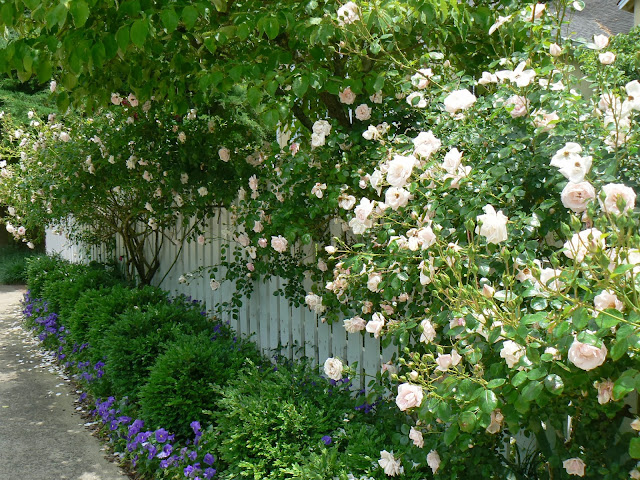 My friend Jane has the most charming garden surrounding an historic antebellum cottage in Marietta, Georgia.  For at least three years - maybe four - we talked about my coming out and photographing her 'New Dawn' roses, which spill over a white picket fence that runs along her driveway and turns and extends along a parking area.  It is a dazzling sight to see when the roses are in bloom.

So, it turned out that one year I missed the roses entirely because I was in France during May.  I somehow missed them the next year as well - they peaked while I was visiting my daughter in New York.

Last year, Jane told me to wait a week, and they would be in full bloom.  I couldn't believe it.  It was already May 22, and usually the roses bloom earlier.  I was going that way, though, and decided to stop by when she wasn't home.  Here is one of the photographs I took.  I thought the roses looked lovely.  But, she was right.  The next week there were even more flowers.

I'm much more used to the phrase, "You should have been here last week."  When we were shooting episodes of A Gardener's Diary on Home & Garden Television, this was something we heard almost everywhere we went.

Timing a garden is so tricky.  One year I went to the Napa Valley.  I chose three gardens, one of which had mostly antique roses and not a whole lot else.  But, looking at the pictures the gardeners showed me, I was determined that this would make a fabulous episode.  The stories behind the roses were so interesting, and their farm house was absolutely charming, with climbing roses forming a screen on a wraparound porch.

Two weeks before the crew was scheduled to fly to California, I received a call.  The roses were blooming early.  Could we come over the weekend, they asked.  If we waited until the scheduled time, there would be nothing spent rose blossoms, they lamented.

I was so disappointed, but fortunately, I had another garden in my pocket, and the latter people had a variety of interesting flowers and a pretty good story.  Oddly enough, their roses were beautiful and at their prime.  The same was true of the third garden I chose.  The antique rose garden was located nearer the coast, so the climate may have been a bit milder, thus the premature blooming.

There were a couple of times, though, that we were too early for the roses.  This happened when we had a new field producer we were trying out.  I scheduled the the shoot according to the owner's estimate of the peak bloom time.  That would coincide with the spectacular Texas bluebonnets that grew on the rolling hills around the garden.  I wasn't too worried because there were hundreds of roses in that garden, so there was bound to be lots to shoot.

However, we ended up with a lot of bluebonnets, but very few roses.  Another miss on the timing.

Back to Jane.  She sent me photographs from the week after I was there.  She was right.  There were many more flowers open.  You can see the number of buds in the above photograph.

Still, this was quite a scene, even though you see only one section.  The picket fence goes on and on and then turns, and the roses continue on around.

Okay, this May, as far as I know now, I'm not going anywhere.  I'll be on rose alert to see if I can time it just right.  There are so many wonderful features in this garden, and I want to use my new super-duper camera my son-in-law gave me for Christmas.  Be sure to check back this spring and compare pictures.  This one doesn't do the scene justice, but you get the idea.  It is a breathtaking sight.


Posted by Martha Smith Tate at 3:08 PM No comments: