The Sophie's Choice of Japanese maples 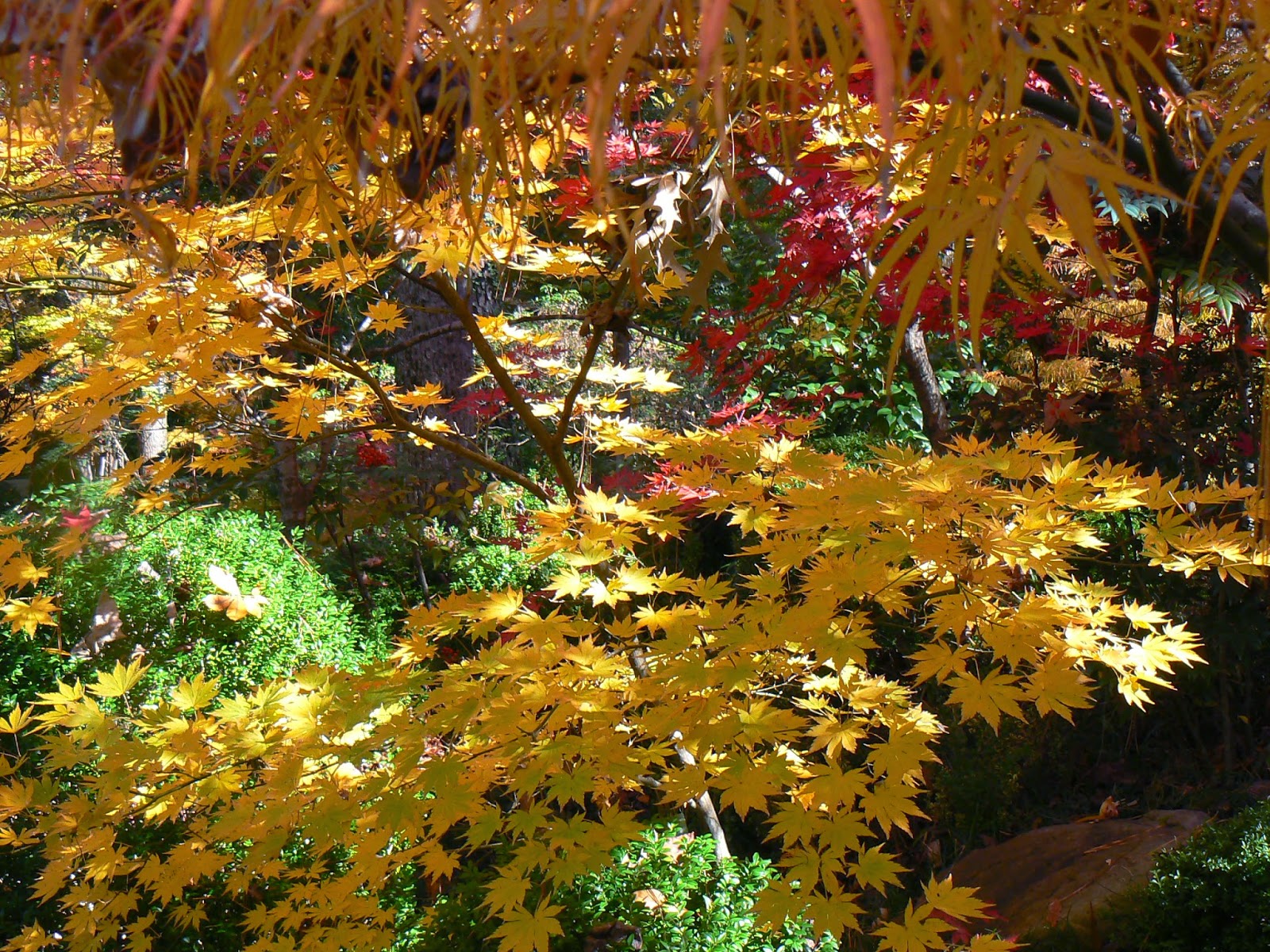 Oh dear.  I cannot spend any more time agonizing over which photograph to show from Bill Hudgins' amazing garden.  Normally, there would not be a problem, since I could run different pictures on different days.  But, I need to get this message out to anyone who has ever wanted a Japanese maple or who wants a tree that will give you three seasons of color.

Let me back up.  I've known Bill for over 20 years.  When he was in his early twenties, he fell in love with Japanese maples and started to collect them.  He first had them at his home in Decatur, which was featured in Atlanta Homes & Lifestyles magazine when I wrote for that publication.  Then, Bill outgrew the space and moved to a three-acre property in northwest Atlanta.  He is surrounded by woods on all sides, so it looks like he has much more land than he actually owns.

So, over the years, he added to his collection, traveling to Japan and studying how the trees were used in their parks and gardens.  He kept planting, and then he started gathering and selecting seedlings and potting them up.  This was all well and good, but now he's come to a point where he has hundreds of them, covering a steep hillside that is a riot of color in the spring and especially in the autumn.

But Bill just lost some crucial help when one of his employees retired.  The trees he selected are now four to six feet tall and come in brilliant autumn colors of red, yellow, orange and burgundy.  These particular trees don't have names - or even numbers - but they are the result of Bill's discerning eye for the showiest colors and leaf form.

The good news for Japanese maple lovers is that Bill is now selling the trees at a "steal," as he called it (and it is, even by my frugal standards). He can't keep watering hundreds and hundreds of trees, and he wants to share his bounty with other gardeners who would appreciate them.

The maples are all in three-gallon pots and can be planted in the ground or in large containers for anyone with limited space.  My own heart is beating so fast right now, thinking of all those beautiful trees and how I'd like to create a woodland like he has, that literally glows about this time every year.

Of course, now is a good time to select the trees, which come in fall colors of orange, yellow and red.  Bill has his in open woodland, and in 2012, I took 240 photographs in one day there.  I remember saying that my heart was on fire. I ended up going back two days later and taking over a hundred more pictures.  There was just that much beauty.

I sound like some sort of salesman (which I am not; I would starve if I had to do that for a living), but this is a once-in-a-lifetime (of Bill's life anyway) to obtain some beautiful trees for your property.

A word about the above photograph.  I flagged sixty to choose from.  Finally, after I realized that half the day had passed, I selected this one, turning down some red, yellow and orange trees that would have burned your eyes.  It's just too hard to explain unless you walk through his garden and point your camera up to the sky and see those leaves backlit from the sun.  I can't think of anything more beautiful.  I hope some of you will get to have some of this beauty.  Feel free to share this with friends.

Note:  If you are on this Web site, write Bill Hudgins' name in the white bar at the top left to see more of his garden.
Posted by Martha Smith Tate at 1:05 PM